A recent comment from a reader, I felt deserved an article as a reply. On Dec 10 Toby wrote this comment on the article Financial Investment Using Market Timing Indicators Part 1 .

I liked his comment and decided to reply in a short article on market timing / market direction indicators.

Here is Toby’s comment on market timing indicators and charting:

“Chartists use technical indicators to help them discern patterns in the market, and thus increase their chances of determining the next direction of the market.

The problem is, those indicators measure what the market has been doing, and assume that trend will continue. But the market can be irrational, witness the fact that pundits often try to explain why the market is behaving so ridiculously (but will soon behave according to their charts) , and why serious chartists (like Teddi) admit that they get it wrong as often as they get it right.

For example, determining that a resistance level of a particular stock is at the (say) 20 DMA is only — can only — be evident after the fact. And today’s resistance level can become tomorrow’s support level. We see this all the time. But we also see a stock break above the resistance line, stay up for a few days, then plunge down below again.

So what help is the chart?

Add to this confusion the fact that exogenous events (off the radar screen) like the latest speech from a Euro zone politician can move markets 4% in a few minutes, and you have a perplexing picture. While technical indicators may help clarify some of the confusion, they still amount to guesswork.”

Thank you Toby for your excellent perspective on market timing indicators and charting.

Market timing Is Not Understood By Most Investors

I think overall most investors do not understand market timing indicators and charting in general and as result they continually enter into love / hate relationships with charting. The problem that most investors have is they are looking for an absolute technique which in investing does not exist.

When I started investing the gentleman who mentored me explained that market timing indicators are reviewing the past to analyze the future. That in a nutshell is what market timing is all about. Charting is also part of market timing as through charting many investors gain an understanding of what has happened and what may occur in the future.

I had a hard time at the start in believing there was any value to either market timing indicators or charting. However as time went on and my mentored showed me how to comprehend what the indicators were saying, it became more and more obvious to me that my mentor was correct. Today I often wonder how anyone can invest without market timing indicators, market direction predicting and charting. They are the key to my success.

I do not know how old you are, but I started invested in the 1970’s when the world was falling apart. Volatility was incredible and we felt markets would collapse, a world war might erupt and the Middle East would explode. By the time the 1980’s arrived interest rates were already double digits as was inflation. The media was filled with articles about the end of equities. Pictures everywhere showed people lined up trying to pump gas and signs were up on gas stations everywhere proclaiming “SOLD OUT”.  My mentor explained that events (such as Europe today) influence market timing indicators but which indicators take into account.

Market timing indicators do not look at the past 3 days and say, “This trend will continue”. Instead they look at the past day and compare it to the previous day and say “If this trend continues here is what is probably going to happen”. For example on Thursday last week the market sold off. On Friday it rebounded in what appeared like a strong positive reaction to the European meeting. However as I pointed out at noon on that day, my market timing indicators absolutely refuted the move up and indicated that the trend remained lower.

Investors Do Not Understand What Market Timing Indicators Are Saying

Market Timing Indicators Fails Because Investors Fail To Follow Them

For example the 200 day moving average is actually a very simple and excellent market timing indicator. Lately it has come under attack by many analysts as “no longer functioning”. But they are wrong.

Look at the charts below. Any investor who consistently follows the 200 day moving average would have missed the worst the markets have to offer. They also would have enjoyed the best gains on the markets.

I have a friend of 30 years who has invested ONLY by the 200 day moving average. He only buys the index, both the TSX (Toronto Stock Exchange) and the S&P 500 index. That’s it. That’s all he invests in. He does not do bonds. When the 200 day tells him to go back to the market, he goes back to the market. Everything goes in. Every single penny in his portfolio is invested. When the 200 day tells him to cash out, he cashes out. Period. He is consistent to a penny. His returns have been truly phenomenal for over 3 decades and he has missed every major market collapse including the latest one. 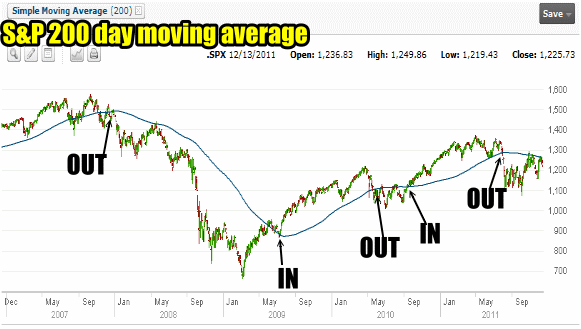 The chart below from 2002 is even more telling. Every single major correction was avoided by the 200 day moving average market timing indicator. Most major moves higher have the investor fully invested. 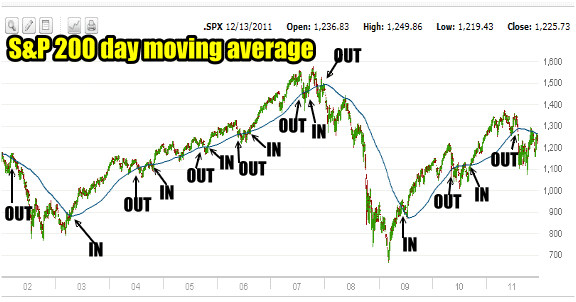 My investor friend read your comment yesterday and told me I should reply and explain that it is investors who are not consistent. They absolutely refuse to believe in their market timing indicators and continually second guess. Most investors, he told me, are more gamblers than investors. On Dec 31 2007, my investor friend sold out of the market because the 200 day told him to sell. He was out of the market until June 9 2009 when the 200 day moving average told him to get back in. For 18 months he sat in cash. How many investors would wait that long to go back into the market? I can tell you personally, very few.

Today my friend has been out of the market since August 2 2011. He is entering his 5th month in cash. He laughed when I mentioned to him that so many investors are still in the market. He wonders why, when the market timing indicators all say, bear market, get out.

When I chart a stock for selling options, I look at many factors and consider the premium being received as a LAST reason. I have repeatedly discussed the importance of having a plan as well as the importance of strategy. Yet every day I receive emails from investors who sold at the money to receive 3%, 4% or even 6% return on an option and now find they are deep in the money with their put or call and worried they will have to pick up the stock or close for large losses. They complain that selling puts just doesn’t work. But they are not following any plan. They have no strategy and they refuse to check charts on the stocks they are selling options against.

Why did they do this? Why did they not look at the stock charts to determine what strike they should seriously consider for selling their options to reduce the risk of assignment? Why not look to see where support probably is. Why not determine where a stock could easily fall.

Most investors do not have a plan because investing is hard work. They refuse to consistently follow every day their market timing indicators because it takes time and effort. Investors have to read articles, company earnings reports and study market timing indicators and charts. The majority of investors do not want to do this. They just want returns. They just want profit. When an investor sells an option for one month and earns 2% they rarely tell their friends they made 2% on 5 or 10 put contracts.  No, they tell them they earned ANNUALIZED 24% on that trade, or some ridiculous number. But in fact, it was a single trade of a handful of puts or calls and that’s it. You do not hear investors tell friends, that they examined the stock and determined that the chance of it falling to their strike was less than 25% based on market timing indicators, volume, breadth, cash flow and that after consulting the 10-20-30 moving averages strategy they determined that the chance of assignment was low and they sold the put based on sound technical and charting indicators.

My RIM Stock Trade Was All Market Timing And Charting

For two years I traded RIM Stock through charting the 10-20-30 moving averages trading strategy and Ultimate Oscillator and when the market timing and chart indicators said the strategy was finished and the risk of assignment was too high, I stopped. I was assigned shares once in 2 years and for a few months. But I checked my market timing and stock chart for RIM every single day. If market timing and charts didn’t work, why would I use them?

To close all I can say is that market timing and charting will always endure heated debates, but I urge investors to forget the debate and instead think to yourself if you have consistently, every single day, taken time to study your charts and reviewed your market timing indicators to determine the next course of action for your portfolio.

Charting fails because investors do not review them daily. Morning, noon and at the close and then compare them and draw upon your own trading knowledge to get an understanding of what is going on in the markets.