As regular readers know I use the SPY PUT to hedge my overall portfolio. It is important to understand that it is a hedge and not an income play.Put selling against my favorite stocks is my income strategy. It is through put selling that I aim for my 12% annual return in my stock portfolios. The SPY PUT Hedge is not meant for income gains but for protection against a declining market. This ties directly into my strategy. Making the decision to close this latest spy put trade also shows the importance of having a plan.

The Reasons Behind Buying The SPY PUT Contracts

When I bought my spy puts on Thursday Feb 9 2012 the market timing indicators were at extremely overbought levels. This told me that the stock markets could sell off from here. The question was, how low would they go if any major selling should happen.

In my article on Feb 10 2012, “SPY PUT Hedging Overbought Condition“, I laid out the reasons for the short-term bearishness and in my chart of the S&P 500 I explained where support in the market is. I also explained how the S&P 500 has not actually tested support since mid-December.

On Friday with the selling in the market I sold half of my SPY PUT contracts. Strategically it was a good move since it captured a decent return of 8.7% for just a day’s risking of half of my original $8732.00 held in the spy put contracts. It also meant that if I was wrong and the market came roaring back on Monday I could exit my remaining 10 SPY PUT contracts with either a small gain, break-even or small loss. 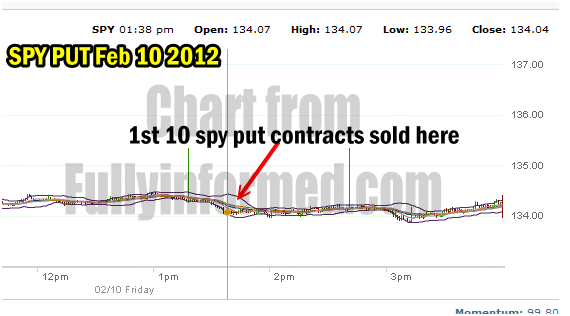 When it comes to investing, particularly with options, it is never a case of ALL OR NOTHING. It is prudent to close positions in stages in the same way that it is often prudent to open them in stages.

Why I Closed The SPY PUT Trade

The news on the weekend out of Greece was actually anything but good. It appears to me that Germany would prefer to push Greece out of the European Union all together. The demands being placed on Greece basically amount to pushing the country into a third world status within all the European countries. While Greece would probably have been better off never joining the Euro, hindsight is always great, it is obvious that by placing further funding into Greece to the tune of more than a 100 billion dollars, Greece is basically “toast” as they say.

However with the Greek Parliament voting to put in place stringent austerity measures, stock markets on Monday loved the news and rallied. Basically stock markets certainly in North America are ignoring the Euro debt crisis as investors appear convinced it will eventually work itself out.

My Spy Put is a hedge, not a risk-on trade trying to boost my overall portfolio. As the market direction is up, there is no need for me to continue with my SPY PUT hedge.

Last year readers may recall that I ended up with a large loss on a spy put trade in September when I refused to follow the market timing indicators and believed that the market direction would continue lower. In the end the market selloff did not occur and I ended up with large losses. This would not have happened if I had stayed with my strategy where the SPY PUT is a hedge only and not designed to earn income. If I had stayed with the strategy and remembered that I ALWAYS follow my market timing indicators, I would have had a profit from the trade in excess of $3000.00, but instead I had the loss of over $3,000.00.

That loss which I wrote an article about reminded me that consistency is key to performance. You can also review the 2011 SPY PUT trades here and scroll down to Sept 15 2011.

It also reminded me why I keep a trader’s journal. You can read more about trader’s journals in this index page for Clorox Stock. I keep a Trader’s Journal for all my positions which allows me to review trades and pick out the reasons why the trade failed or was not as profitable as it could have been. My trade on September 15, wiped out over $3,000 of income which I could have used to protect my overall portfolio. That $3,000 would have boosted my gains last year by over half a percent. 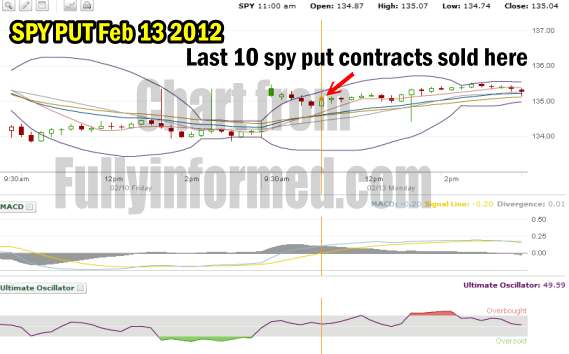 I therefore closed the SPY PUT contracts on Monday. The remaining 10 spy put contracts were sold at the same price as I bought them at, namely $4.35. You can review the entire trade here in the spy put index post.

I used the MACD and Ultimate Oscillator to assist but overall once I made the decision to close the spy put trade I simply waited for a bit of weakness and sold then. Throughout the day there was never an oversold indication from the Ultimate Oscillator market timing tool. Instead on Friday the market closed lower and the SPY flashed an oversold indication at the close. Today, Feb 13 2012 the SPY flashed an overbought but never an oversold. This shows the strength that stays with this present stock markets.

While I remain concerned about the overall bullishness in the market, the market timing indicators point out that the stock market is working out the overbought condition and is probably testing support right now before market direction continues higher up.

Remembering that my overall strategy is income through put selling, covered calls and a few times of holding stock, it is prudent to close the SPY PUT Hedge at this time. The SPY PUT strategy is a hedge against market declines, it is not a trade to try to capture additional income.