Over the past 4 days my SPY Put trade has not worked out. The market has rallied each day except for Monday.

The Reason I Put In Play My Spy Put Hedge on Sept 9:

My SPY Put Hedge Cash Cushion up to September 9 contained $56533.00. I felt that with Greek, one year sovereign bonds skyrocketing to 90% and 2 year bonds at 70%, the chance of an event over the weekend was very high which was why I bought more than my usual amount of spy put contracts.

Below is the chart for the past 5 trading sessions. You can see where I purchased the spy put contracts on Friday Sept 9. On Monday the market sold lower and the ultimate oscillator indicated oversold on the market. I unloaded 10 contracts with the intention that each day I would unload more of my contracts in lots of 10 at a time as the market moved lower.

The chart shows that this did not happen and in fact on both Wednesday and Thursday the Ultimate Oscillator indicated overbought conditions in the market despite the low volume in this current rally. However I stayed in the market with my spy put contracts because each day at the close the market fell. This is a definite sign of a bear market and I hoped the market would pullback making my SPY Put trade profitable. 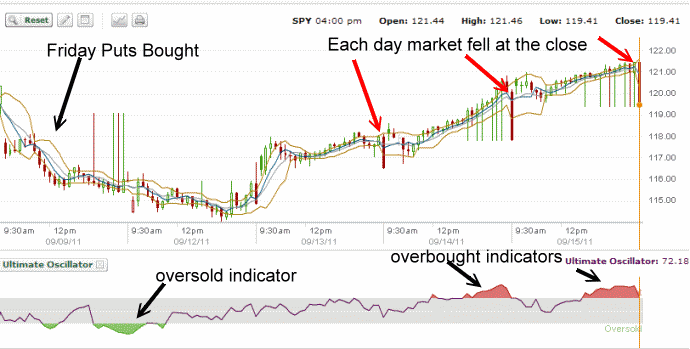 However I am an investor and I know better than to hold forever when it comes to puts or calls that I have bought and my spy put contracts are no exception.

Such a loss shows the value of my building up a cash cushion with my SPY PUT Hedge and the importance of unloading the put contracts throughout the trade both when profitable or if unprofitable.

During the year I buy and sell spy put contracts in order to build up a hedge against market declines. By doing this, I am also preparing for when I will be wrong and buy the spy puts only to find that the market instead of falling further, climbs higher.

I have posted this article to show that even after 35 plus years of trading, I can lose capital as easy as any investor by making a wrong decision. However because I know from experience that I cannot be right all the time when it comes to my spy put hedge, I therefore rely on my cash cushion to “cushion me” for those times when I will be wrong and take losses.

This year to date I have been on the wrong side of my spy put hedge, 6 times. The total loss against my cash cushion has been $6595.50.

This week’s single trade accounted for 56% of those losses.

I know from experience that I will be wrong at times and as the market climbed higher throughout this week I kept using stop losses to force myself to sell my spy put contracts for losses in order to release my capital and prepare for the time to buy back into the SPY Put again, as I do believe the market will fall shortly as this rally appears to be running out of steam. But there is never any point in fighting a trend. The trend was up for most the week and I used the stop losses to force the selling of my spy puts and release my capital to fight another day.

For those wondering about how my SPY Put Hedge works and the concept of my cash cushion, you can read the SPY Put Hedge documentation here:

For those interested in knowing more about the SPY ETF itself this link will assist:  Spy Put