Often the reasons for using the SPY PUT hedge are pretty simple. Whenever I see a market top or a market direction down confirmation I know it is time to step away from my usual stock put selling selection criteria for a moment and pick up some spy put contracts.

Yesterday I purchased 20 SPY PUT April 21 2012 $135 contracts for $4.35. My market timing indicators have for a few days now been sending warnings that the market direction is about to change.

On Feb 9 though, the market timing indicator I like best, namely the Ultimate Oscillator warned that the overbought condition of the S&P 500 was at extreme levels. This was confirmed by the Slow Stochastic and Fast Stochastic. You can read the report here. The fast stochastic which is excellent at picking tops and bottoms in stocks as well as stock markets flashed overbought for the past 3 trading sessions but on Feb 9 it has an extreme reading of 98.08. It can go higher and it certainly has but every time I have seen such a high market timing reading from the fast stochastic the market has pulled back.

The Fast Stochastic reading ALONE would have made me buy SPY PUT contracts. But with the slow stochastic and ultimate oscillator confirming that the market direction is about to change the choice to purchase SPY PUT contracts was an easy one to make.

With so many analysts now on board the bull wagon why would I pick up SPY PUT Contracts today? Here are my reasons:

2) A number of stocks have NOT beaten earnings estimates and in fact have missed them. This is the first time since 2009 that stocks are beginning to have trouble continuing to generate ever high revenues. As well analysts throughout the past 3 years have been conservative on their earnings estimate believing that the credit crisis and euro debt would impact companies’ earnings. Since companies kept beating those earnings analysts have in this quarter placed higher expectations which a number of companies have not been able to meet. This is another sign that spy put contracts are worth picking up.

3) The number of analysts and smart money managers who are now on the bull band wagon is actually kind of funny. Here is the latest tickersense blogger sentiment poll. The bullish reading of above 55% is an amazing recovery from Jan 17th when the reading was just 40%. For those who are interested, select this spy put link to read more on tickersense. 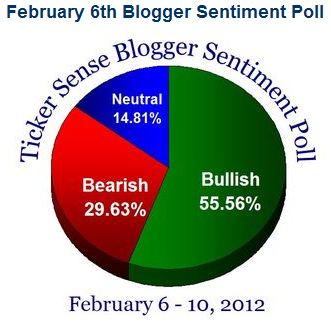 Put selling buying includes way too much bullishness. This reading from tickersense is another indicator that a top is probably in place.

And it is not just blogger’s who are overwhelming bullish. Among the other’s include Bill Gross the head of PIMCO who hold the largest bond funds in the world. He actually is bullish on equities.

3) What’s new in Europe? Absolutely nothing. All the issues still remain and honestly how can forgiving Greek debt and then loaning them more money make sense? They want bond holders to take a huge haircut (which I call default) to get the debt back in line with GDP and then turn around and pile more debt back into the country which pushes the debt to GDP ratio back up. How can this make any sense? This has to be a great reason to pick up SPY PUT contracts.

4) The chart below of the S&P500 rally from November shows that since December 18 there has been no true test of support in this 16.8% rally. With the market timing technical indicators now warning that a top if imminent, I could be early with my SPY PUT purchase but I believe it will definitely work out. The S&P500 must consolidate before deciding on the next market direction move. 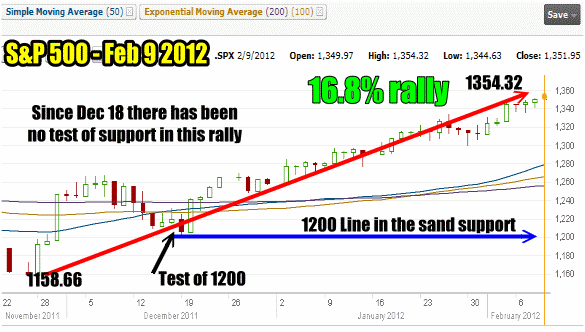 When the S&P500 retested the 1200 level back on Dec 18 the following morning the rally continued. Since then there has been no retest of any support levels in the S&P 500. I referred numerous times last year about the 1200 being the line in the sand for support on the S&P 500 and the S&P 500 retested it several times before moving back up.

No stock market goes straight up. Eventually a top is put in place and the market will retest support to determine how much support is in at specific stock market levels. Once investors realize that a top is in place I believe more selling will emerge.

This could end up being a day trade or I may sell half of my position tomorrow and hold the rest into next week. For those who are interested, these three articles explain my SPY PUT Hedge strategy and how I have used it since the SPY PUT was introduced in 1993.

1) The Short Version Using The Ultimate Oscillator This is my favorite way to trade the SPY PUT hedge.