Market Timing Is About The General Direction

While many analysts I watched this week were disappointed and puzzled by the week, there were actually a number of important signs.

On Monday Oct 31 market direction changed and the market dropped which as I indicated I expected after such a terrific rally. The market closed on Monday at 1253.30.

Tuesday the market direction remained unchanged and the market fell further but held just above 1200.

Wednesday the market opened lower and then market direction changed as the market climbed when the 1200 line was not breached. Thursday the S&P market direction remained up and the S&P climbed higher. Friday saw some selling and at the end of the week the market ended up at the same point as Monday’s close. 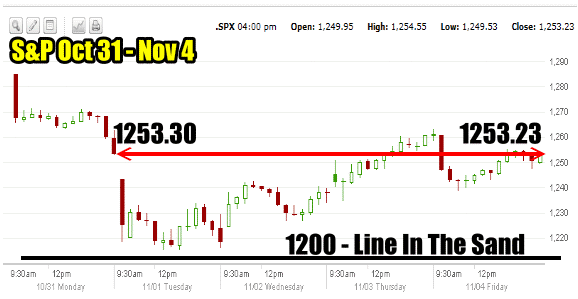 This Week Was Good For Both Market Timing and Market Direction

While this week might seem odd to investors and analysts it is a good technical sign that assists in Market Timing. This week with all the bad news from Europe including everything from an on-again, off-again referendum to a possible “kick Greece out of the EU” moment and finally a take it or leave it attitude among many European leaders you would think the market direction might break lower. It didn’t showing that there is indeed support at 1200.

How strong is the support is difficult to say at the moment, but perhaps our market timing indicators can help us if we look back further in time.

When I look back six months I can see a definite pattern which makes Market Timing a lot easier. The significance of the S&P 1200 cannot be understated. When the market direction changed and the markets fell apart in August the S&P rallied back 7 times to the 1200 level and then in October when market direction changed after Oct 4, the S&p finally broke back above 1200.

The market could easily try to change market direction and try to break through the 1285 level again if Europe puts its troubles on hold for a while longer.

To understand more let’s go back further to see if the 1200 has a longer term significance to my market timing call and market direction outlook. 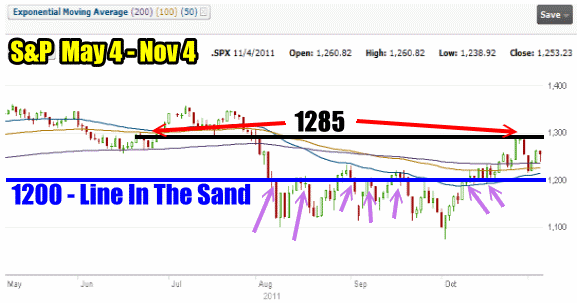 Market timing often is a lot easier to call when I look further out. The chart below shows Nov 4 2010 to Nov 4 2011. After looking at the 1 year chart a lot of what is happening in the market begins to make sense.

1200 was support back in the late fall 2010. When the market direction changed in September – October 2010 the market pulled back to 1200 before it began a climb. At the 1200 level Market Timing changed to positive for a move higher, primarily because 1200 held.

At 1285 the S&P market direction changed to sideways before the next attempt to move higher. However 6 times the 1285 was revisited which kept my market timing calls neutral with a bias to down. Why? Could it be that at 1285 stocks as a broad measure are fully valued based on the economic condition, economic uncertainty, and earnings potential.

Are Stocks Over Valued Above 1285 Which Is Why Market Timing Calls Always Turn Neutral to Negative?

While so many analysts continue to point out how great earnings are, for the majority of companies they are no better than in 2006. Revenue looks better because most have fewer employees and most businesses are therefore reporting better overall revenue numbers, but still, not revenue numbers strong enough to support 1350 or 1400 in the S&P. Certainly not yet. If economic conditions improved and more people found employment, then earnings potentials could push the S&P solidly into those ranges.

Therefore based on earnings, the economic climate, Europe, the housing slump, perhaps the chart looks a lot more like below where I can clearly see where stocks are under valued, fairly valued and definitely over valued.

If many readers recall, starting earlier this year I indicated that I had to stop selling puts on many of my favorite stocks because my market timing indicators showed that stocks were over-valued and I did not want to sell puts only to end up owning shares at over valued prices.

When the market fell apart in July to August I started loading up on selling puts again and since August I have been 100% invested in selling puts, but at levels that would make owning my stock choices attractive if assigned stock. Check out this market timing link to view a 5 year S&P chart. This give you pause for thought about buying the next rally. 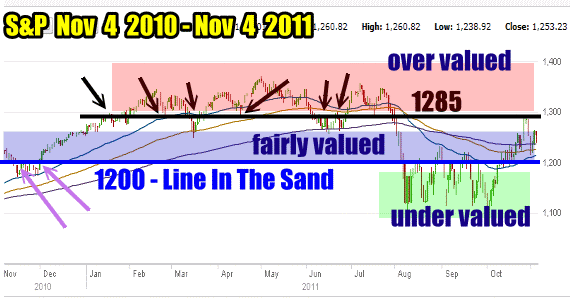 Next week is important as Europe will continue to dominate. Based on the chart above and the negative Market Timing indicators, if Greece does not accept the EU proposal then I believe the market direction will turn very negative and the S&P will break the 1200 level again and could fall back toward 1100 and if the selling intensifies perhaps 1000 is still not out of the question.

But I believe Greece will accept the terms and the market direction will be positive which will push the S&P above 1285. At that point I will be staying far enough out of the money will my sold puts that should any rally turn sour I will not have to worry about assignment at over valued prices.

My guess is Greece will not leave, they will accept the terms, after all they are going to be forgiven half their debt and life will go on for a while longer. This is the best part of the year for stocks. The November to April period usually sees some strong profit potential and investors are still hoping to see higher returns this year.

While my market timing indicators remain negative and the market direction is neutral with a bias lower, if Europe co-operates, then the market should rally but to actually reach above 1350 in the S&P I believe earnings have to be a lot stronger and unemployment must come down, otherwise stocks will be over valued once again.