Market Timing Systems have been around as long as stock markets. Candlesticks as a market timing system for example was developed in the mid 1700’s in Japan based on the tracking or rice price movements. The candlestick system has millions of followers around the world. Many swear by the accuracy of candlestick market timing system. There are literally dozens more. The moon, planet alignment, weather, interest rate yields, who is in the Whitehouse and literally patterns of all kinds.

The Ultimate Oscillator As A Market Timing System

Who Developed The Ultimate Oscillator

The standard time frame used by most people is 7, 14, 28 representing those 3 periods. For my market timing system, I prefer 5, 10, 15 which I have found through use, gives me more warning of a momentum change. 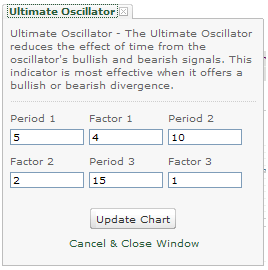 These are the Ultimate Oscillator Settings I use as part of my market timing system.

The Ultimate Oscillator is measuring momentum through buying pressure calculations. These calculations take into account buying pressure for overall direction (up or down), the magnitude of that gain or loss, the time frames involved in that buying pressure and the weighted average of the preceding three measurements. Therefore when I change the settings from the standard 7, 14, 28 I am getting a reading that takes into account a shorter time frame, which for my market timing system is what I want. An investor who has a longer time frame could theoretically change to an even longer time frame to look further out in time to possibly gauge mid-term or longer term stock market trends.For those who want to understand the mathematical formulas used you can select this market timing system link.

In theory the Ultimate Oscillator as a market timing system should be able to tell investors when to get into the market and when to stay out. To see how well it works in a crisis, let’s look at 2008. The chart below shows the market timing signals in theory. Every S equals a SELL SIGNAL and every B a BUY SIGNAL. Looking at the chart it is obvious that despite the high volatility of that period, the Ultimate Oscillator would have kept an investor from losing money. In fact he would have made money. Remember that the settings you are looking at our my settings of 5,10,15 on the Ultimate Oscillator. The standard settings did not reflect such strong oversold and overbought indications. 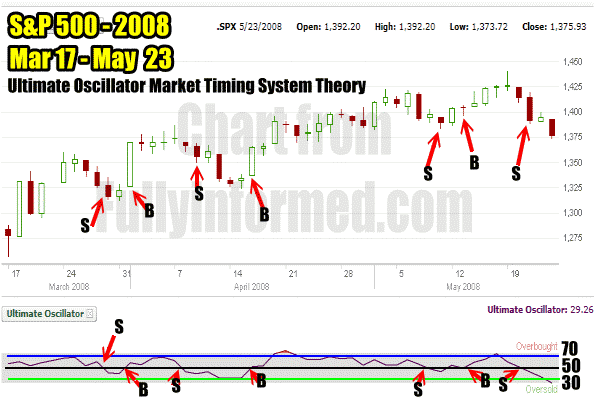 I do not use the above theory however to do my buying and selling. Instead as a market timing system I prefer to looking for stronger or more extreme signals both to get in and get out of the market. The chart below shows my trades against the S&P during the same time period. I was only in the market twice. While whether I made any more profit than the above investor would have I don’t know, but I do know from using the Ultimate Oscillator since the mid 1980’s that using the extreme readings has kept me out of the market during the worst of times. 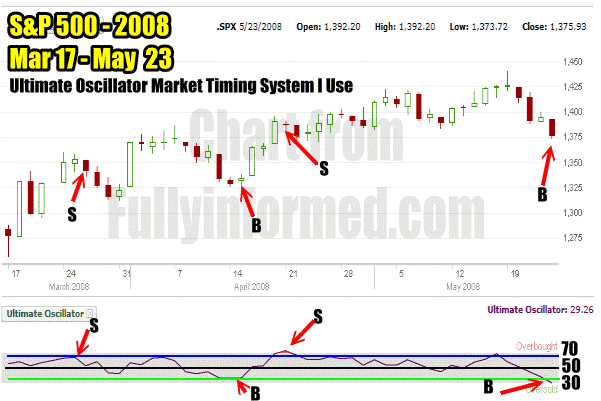 During the market crash of the fall of 2008, the Ultimate Oscillator market timing system helped to generate profit and income as the market fell hundreds of points. If you check the chart closely you can see that some of the days had swings of almost 100 points in the S&P. The early part of September 2008 saw a loss with the trading, while the rest of the year saw very good gains, particularly the period of October to early November when the Ultimate Oscillator was almost perfect as a market timing system, predicting the recovery which lasted only until early November but which saw the S&P move over 100 points. 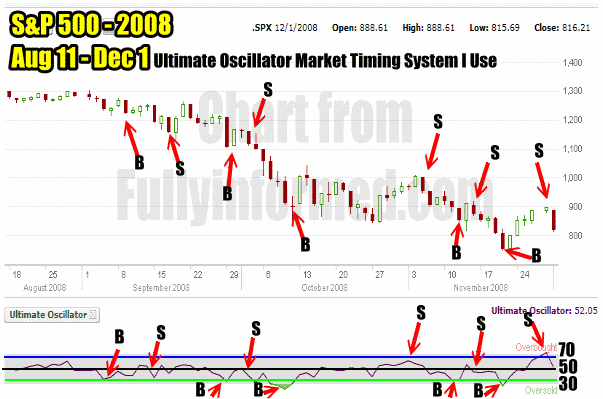 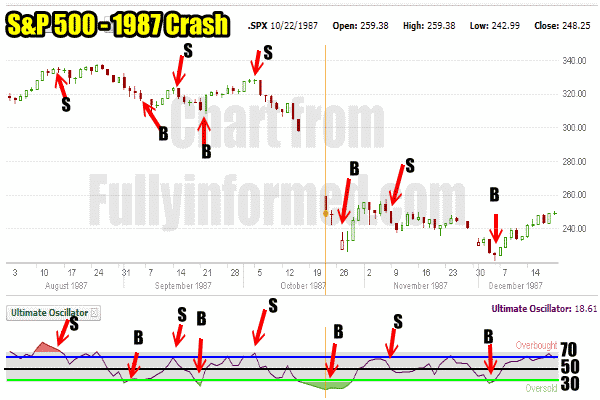 For example on Jan 12 2012 the Ultimate Oscillator was in overbought territory and gave a reading of 75.39. On January 24 the reading was 79.61 which is higher showing that momentum is continuing to build despite the overbought condition. On Feb 9 the reading was 81.80. However on March 14 the overbought reading was 71.61 and by March 16 it has only climbed to 75.30 before falling. This is a sure sign to sell and could mark a turning point in the recent rally. When the initial 81.80 reading was given, the S&P 500 was at 1351.95. Presently the S&P is at 1370.26 which is 18.31 higher or just 1.35% higher. It will be interesting to see if the market falls to 1350 and holds. Personally I don’t think that will happen as I believe support is lower.

On the third reading which I have marked 3 the ultimate oscillator flashed just 40.07 on March 6. As well in the recent move lower and then bounce up the Ultimate Oscillator did not flash a buy signal. 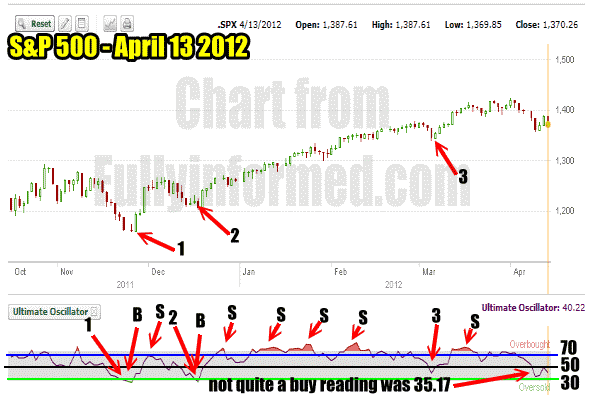