My market timing indicators at first glance look pretty flat, but upon closer inspection there are some interesting readings which would indicate that presently there is limited risk in staying in stocks, despite the height of this market. While market direction may appear stalled again at the same resistance point as just a few trading sessions earlier, not all the market timing indicators are flat.

On Tuesday, last week when stock markets fell they triggered a number of market timing sell indicators. However by the end of the week the market direction had shifted back up recovering all the losses. Smart money bought Tuesday’s dip. I bought some shares including Bank Of Montreal Stock (BMO) and once again PepsiCo Stock (PEP) and I sold a lot of naked puts.

According to the Trader’s Almanac the Dow has been up 17 of the last 24 years on the Monday before this Friday’s triple witching. On the Friday itself, the Dow was down 3 of the last 5 years. Aside from these historical facts there are a few other market timing clues that might be worth discussing.

Second is the S&P 500 itself which if you look at the chart below from November you can see that the S&P 500 is right back at resistance. If the market cannot break this resistance this could prove to be a double top forming which means market direction would turn down. As well the wedge caused by Tuesday’s dramatic pullback must also be punched through on the upside. To do this stocks will need fresh capital from investors. Are investors ready at this level in the S&P and indeed in all stock markets, to put new capital to work? My market timing indicators may hold another clue. 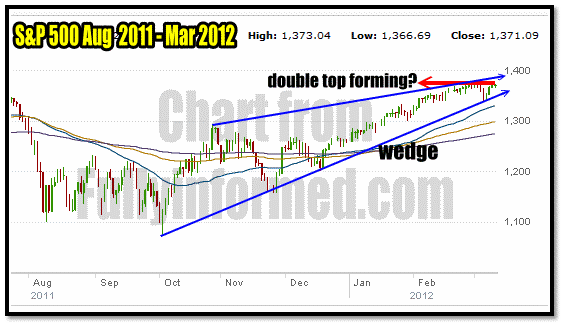 But I believe there are two key market timing indicators that bear closer inspection. The slow stochastic is rising and MACD (Moving Average Convergence / Divergence) which is still negative, is up higher again today. It should be noted that the MACD readings have improved since Wednesday when they gave a negative 3.53. Each day since Wednesday MACD has been climbing. As well while the other market timing indicators remain flat, the Slow Stochastic readings have also climbed every day since Wednesday of last week. Could this be signaling that the S&P might break through the wedge pattern and push higher? I think aside from the slow stochastic and MACD the VIX might also be supporting market direction pushing higher.

Market Timing and Market Direction With The VIX

The VIX measures volatility in the market and today it was down to 15.23 and closed at 15.64 which is a new low for the VIX over the past year. The VIX chart below shows the continual decline since December in the VIX readings. The readings around 15 makes an interesting market timing conundrum and the charts below explain why. 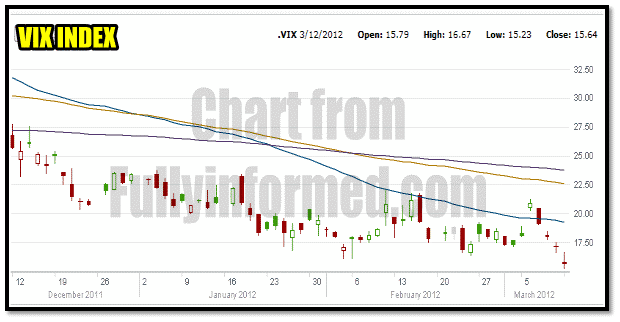 Looking at the VIX chart below, over the past 3 years when the VIX was as low as it is today, the market rather than rising, fell and volatility rose. Aside from once in 2010 and twice in 2011, the VIX has not been this low since July 2007 when with the VIX at 15.00 the S&P reached 1549 before pulling back. In October stocks pushed higher again this time reaching 1565 before collapsing. However during the period from July 2007 to October 2007 the VIX never reached 15. In Fact, the markets did not see the VIX reach 15 again until 2010. 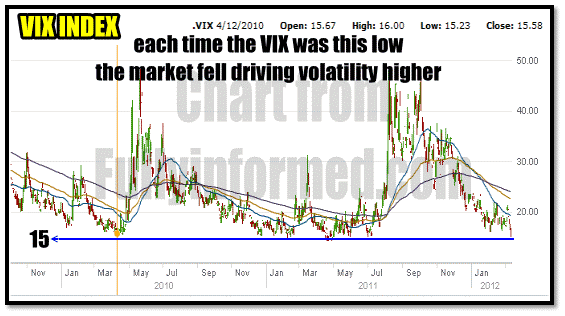 VIX INDEX chart for 2010 to 2012 shows that each time the VIX has a reading near 15 the markets fall and the VIX rises. 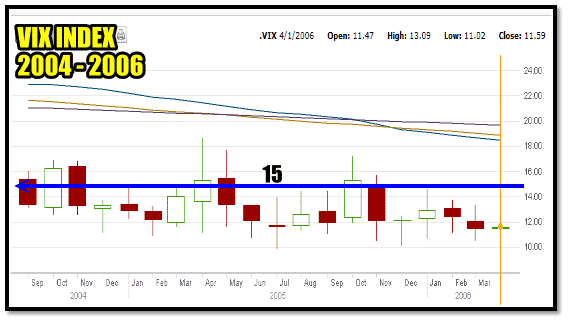 A strong bull market such as the period from August 2004 to March 2006 normally sees low volatility as the market continues to climb in this kind of environment. The chart below shows the S&P 500 during that period of low volatility. A 200 point move at that time period marked an 18% return. 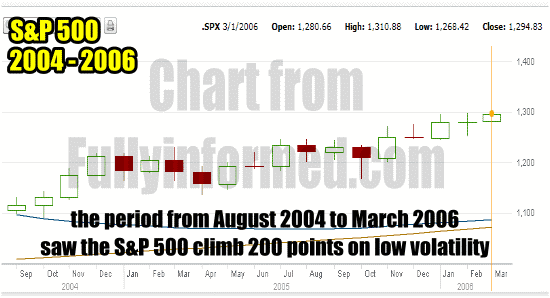 Very low volatility has occurred at other times including 1993 and 1995. In fact much of the 1990’s saw many lengthy stretches with volatility below 15.

But is this present time period anything like the 1990’s or even 2004 to 2006? Is this the beginning of a solid bull market? A bull market that not necessarily shows large gains but exhibits low volatility and limited downside?

When investors view the economic conditions today are there reasons to think that economically the world is back on a more solid footing or is this just a lull in the storm?

With such low volatility as we saw today, and both the slow stochastic and MACD indicating a rising market direction, today’s low volatility reading may be a signal that the market is going to push through this stiff resistance and move higher. At the same time over the past two years since the bear market crash any reading in the VIX as low as today is a clear signal that the market is about to fall again.

This is a tough call and the market is sitting right at the crossroads from here. Tuesday’s big decline was quickly bought up. That was a very good sign. The payroll numbers were decent and the Greek bond swap is done. Whether it marks the turning point in the Euro Debt Crisis is anyone’s guess. Personally I believe there is more volatility to come for the Euro Debt Crisis but it could be months away.

If the Federal Reserve should move quicker and decide to raise interest rates even slightly, I believe any rally in equities will end. At the same time though I do not believe the Federal Reserve has any interest in moving rates up before the economy shows strong recovery signs and that has to include a solid bottom in housing. I think there is time for a move higher in equities and this could be what both market timing indicators, MACD and slow stochastic are signaling.