My market timing call of Oct 27 indicated that after the terrific October rally there should be some sessions of weakness.  While I think most investors expected some weakness, none expected such a dramatic market direction move lower.

The move lower right from the outset brings us back to Europe again. Now the Greek government is considering holding a referendum on the bailout package being offered. In my mind no matter what happens, a default it definitely going to occur. If they agree to the bailout, investors and banks will lose probably half their investments in Greek debt. If the Greek citizens vote against the bail out, which would not surprise me at all, then a default will occur.

Either way it is a mess. What I wonder about is, if the powers that be can forgive half of Greece’s debt, then why should Italy, Portugal, Ireland or Spain not be given the same treatment? This is like your next door neighbour who borrowed more than he can afford and suddenly the bank says OK, we will let you pay us back half what you owe. Well then why not me as well? It’s kind of amazing to even think that Greece wants to hold a referendum on whether to accept the terms of a second bailout.

It is incredibly complex and in many ways I think borders on the ridiculous. I believe this issue is going to be around for some time yet.

The market timing systems I recently mentioned in earlier market calls, such as the Hi Low Logic Index and the MACD mid-October market up call all point to a market that will move higher in the coming months. That doesn’t mean an immediate market direction up.

For one thing, by the end of October the S&P was up over 13% and the Dow almost 12% while the NASDAQ was up 17%! These are incredible numbers which shows that despite market direction being up from the Oct 4 sell-off, this is still a bear market. Bull markets don’t have whipsaws day after day, market gaps and huge rallies and then pullbacks like today. But bear markets do.

That said the market was due for a pullback. In my opinion, the news out of Greece just pushed the market lower a lot faster than was going to happen anyway. In my market timing / market direction call of Oct 27 call, “Time To Hibernate?” I indicated that the S&P 1200 is the level to watch. As for market timing, I believe the market will test 1200 to determine if it can hold at that level.

If the market direction does not change but breaks the 1200 level, then the bear market will continue and more selling will return. When the bear market started back in May of 2011 I indicated that I believed the S&P 1000 could be tested. While this has not occurred and there could be enough strength in the market to keep it above 1000, I think investors should prepare for a test of 1000 on the S&P, if the market breaks 1200.

Market Timing always benefits from keeping an eye on the indices that have led the overall market direction, either up or down. One of the best market timing indicators for the rally from March 2009 has been the NASDAQ index. It has led the overall market direction repeatedly since the markets crashed in 2009. Today it pulled back further than either the S&P and the Dow Jones Industrial. The fall of almost 3% at the close puts the NASDAQ back to the 200 day exponential moving average. 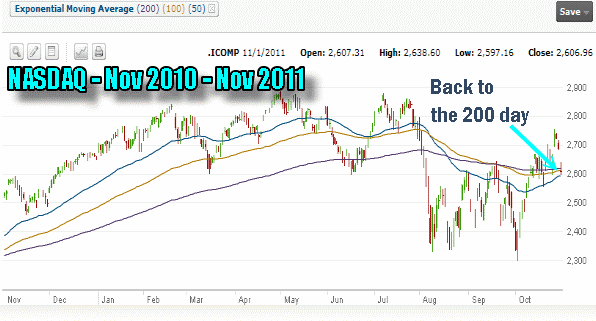 Two stock I watched throughout the day were Priceline Stock and Apple Stock. Both of these stocks are great market timing assistants. They have followed the markets higher right from March 2009.

Today though market direction was rather severe for Priceline Stock. The stock fell to a low of $478.65 for a loss of 5.7% before it pulled back up closing at $489.02. This still represents a loss of 3.68% which is more than the NASDAQ for the day. As well Priceline easily sliced through the 50 day and 100 moving averages to test the 200 day moving average. If it breaks the 200 day moving average it will be the fourth time since August it has broken the 200 day. This is the type of market timing signal that warns this stock could be getting ready to tumble. If that happens to a market timing indicator usually the overall market is not far behind. 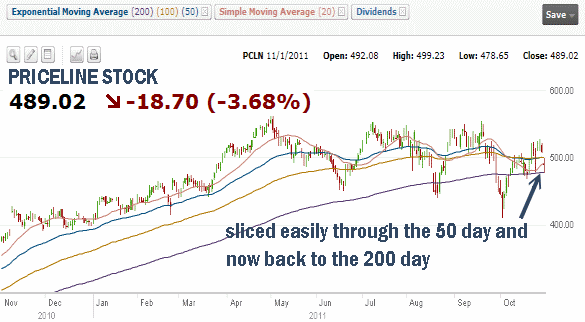 Priceline Stock has been a good market timing assistant.

The other market timing assistant has been Apple Stock. When I saw the market direction turn down right from the open I watched Priceline and Apple stocks. Apple moved lower and tested the 50 day but did not fall further, a good sign. 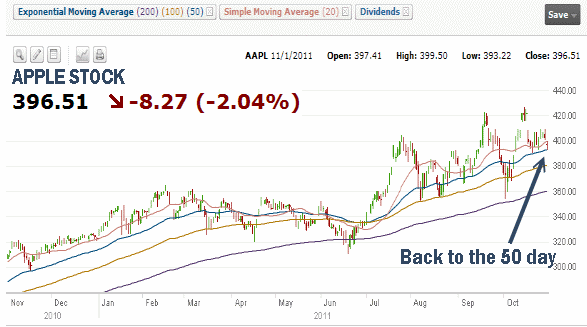 The other market timing indicator, Apple Stock did not break the 50 day moving average.

With Europe continuing to dominate the markets, good news is not being followed by investors. Auto sales announced today were very strong and some cities are seeing a reasonable rebound in housing prices including Detroit. Going forward the volatility is sure to keep option premiums up and make market timing difficult to judge and market direction tough to call.

November usually marks a tepid recovery in stocks. Historically a 1.5% gain is not uncommon. If my market timing call is right and the 1200 can hold, then the market could turn higher, but there has to be solid reasons for the markets to not just regain their footing but move to higher highs and right now I do not see anything that tells me market direction will turn solidly bullish.