With the recent stock market weakness my SPY PUT Hedge trade is back in use. This weakness at this level is I believe to be expected. The market has had a terrific rally from the lows of November 25 2011 and stock markets just do not go up indefinitely. There has to be a breather for markets to pull back, test for support and then either resume the uptrend or if there is no support than pull back until it finds support.

Stock markets can only climb when there are buyers and my SPY PUT takes full advantage of those periods of weakness. Readers can recall from my articles on why I use the SPY PUT that I like to build up a cash cushion throughout the year. Whether the stock market is in a bull or a bear, a cash cushion built through day trading or swing trading the SPY PUT is comforting throughout the year. It gets larger and larger as the year progresses and eventually it is nice to see if it can protect against a 10% or 15% decline in the stock market valuations.

In 2008 my SPY PUT Hedge returned 45% which was an incredible year. By being able to protect against declines of that magnitude I have great comfort with my put selling against my favorite stocks knowing that if I am assigned shares in a market meltdown I have a large cash cushion there to protect me from any steep falls in valuations.

Put selling during a bull market is a bit different from a bear market. In a bear market daily rallies can often be counted on to eventually sell off making even the poorest SPY PUT trade profitable at some point. In bull markets however the timing of when to buy the SPY PUT contracts is more difficult since overall the market is heading higher and I am basically just buy puts on weakness to build up my cash cushion.

Today’s trade is a good example. The S&P 500 market sold off right at the open and within just slightly more than 15 mins the S&P 500 bounced back and gave me the overbought signal in the ultimate oscillator.

I bought my spy puts. By 11 AM with the market selling off I sold my spy puts on a good oversold signal from the ultimate oscillator.

You can see the signals on the chart below. 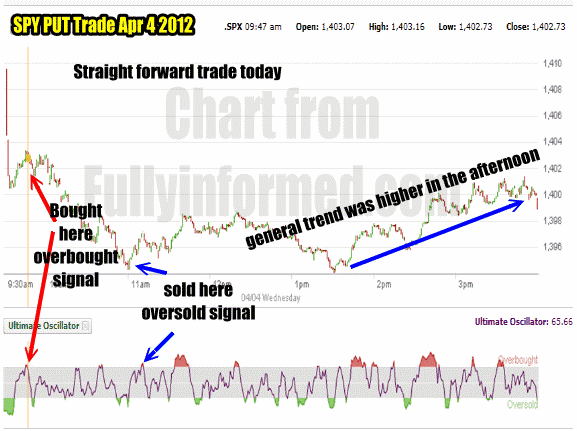 Around noon there was another opportunity to buy the SPY PUT but I was not watching the market so I did not do the trade. In the afternoon the market continued higher all afternoon as it tried to recover. It is important to remember that presently the market is in a bull phase and as such any rise in the S&P 500 has to be watched closely since the overall trend in a bull market is for prices to move higher.

I never worry about how big the profit is on my SPY PUT Trades during a bull market. As long as there is a profit and the ultimate oscillator signals oversold, I unload my puts. This is because my spy put option strategy is to earn income, cut losses quickly and built that cash cushion for the inevitable pullback in stocks which I may need protection against.

I have also received recently a lot of emails asking me about the SPY PUT CALL RATIO and what it means. The SPY PUT CALL RATIO is used by a lot of investors to try to determine market direction based on the interest in spy puts and spy calls. In other words the ratio of spy puts to spy calls can be considered a predict as to overall market direction. When interest in the spy puts is higher than the spy calls, it is considered a bearish sign and vice versa.

Then there are those who believe exactly the opposite. They use the SPY PUT CALL RATIO to predict opposite moves in the overall stock markets. The contrarian view is that if the number of SPY PUT Contracts is a lot higher than the SPY CALL Contracts. Therefore while this would seem to tell investors that option traders believe that the market is moving higher, contrarian investors believe that rarely are the majority of investors right and so they take the opposing side for the spy put call ratio. Contrarian traders therefore believe that the market is going to move higher when the interest in the spy put is a lot higher than the interest in the spy calls and vice versa.

Today’s spy put trade was small but because this remains a bull market I cannot expect that returns from the spy put will be higher than during a bear market. Nonetheless it was successful and added $516.00 to my SPY PUT Trades for 2012 continuing to balloon my cash cushion. Considering that the capital I had risked for the trade was $5852.00, this trade netted 8.8% which is an excellent return for a few hours of work.