Microsoft stock has long been a favorite of mine. I have engaged in put selling against Microsoft stock longer than 10 years and each year ended up with double-digit returns. Rarely have I held stock. In the bear market of 2008 to 2009, when Microsoft stock fell all the way to just below $15.00 I bought shares and sold a lot of puts.

It’s a wonderful tech company that is actually quite diversified and has a wide moat of cash protecting the Microsoft Castle. I have written a number of articles about the value in Microsoft Stock including the popular Better Than Gold in which I received more than 500 emails from readers about.

I am already holding the Feb $27 sold puts and the March $26 sold puts from a trade back on Jan 11 2012. I am pretty happy with my positions but I am sure on Friday my Microsoft Stock Feb $27 puts will expire worthless. Rather than wait for Friday I wanted to take advantage of this morning’s weakness in Microsoft stock to sell into April.

By staying ahead of the various options expiration dates I can earn higher premiums on puts sold simply due to the puts being sold are further out in time. This also allows me to use some margin for what I feel is a pretty safe bet with Microsoft.

Right now analysts are promoting Microsoft Stock. This is somewhat unusual as analysts have felt for a long time that Microsoft Stock is a “go nowhere” stock. I have enjoyed Microsoft staying with a well defined ranged which has allowed me to sell puts easily and if the puts should fall into the money, simply roll them month after month and where possible reduce the number of put contracts I am rolling.

Since I am already holding Feb and Mar 2012 puts, I want to keep the income rolling in and stay away from $30.00. Since option premiums are poor for the lower strikes when looking at Feb and Mar 2012 I have to decide if the risk of assignment warrants moving into the $29 put for March. It doesn’t and here is why.

The chart below is of Microsoft stock from 2009 to 2012. The recovery period from the stock market crash of 2008 – 2009 is pretty obvious. It’s also obvious why I bought shares and sold many puts in that crash. Microsoft Stock was very undervalued in the bear market crash.

But looking at the period since the stock market crash I can see that Microsoft Stock has visited the $30.00 valuation several times and not held. It has been unable to establish a higher trading range. I can also see that a pull back from those highs took it back to $28 where there is more support. From that $28 level the stock has rallied in the past.

This is understandable. A lot of investors holding Microsoft Stock over the past 10 years tend to sell when it gets over the $29.50 level and then wait to repurchase their shares. Then they sit and hold the stock, earn the dividend and wait for another rally. This has been an ongoing strategy by many investors which has worked very well.

However the overall trading range is still below $28.00. Microsoft stock right now is once again being bought up. I believe it could stay above $28 right into the Spring and if not, it should revisit $28 again either later this year or certainly into 2013. Therefore I have sold naked puts at the April $28 strike.

Using margin requires some extra of planning. I don’t like using margin at high strikes. I prefer to use margin for strikes that are far out of the money reducing the chance of assignment. I prefer to use margin to earn income without ever having to commit actual capital from margin into the trade. That is the most beautiful thing about using margin. It is the only part of investing that I would label as “free money” if used properly. You can read more about margin and compounding your returns here.

With margin I am picking the $26.00 strike because I know I can rescue those puts easily from a pull back in Microsoft stock.

Below is the last 12 months in Microsoft Stock. You can see how $28 is the top end I can safely consider selling. If the $27 put strike had decent premiums I would be selling it instead of the $28. You can also see the safety of selling the $26 put strike. I have a very good chance that if the stock falls by April to $26 I will be able to rescue those puts and roll them lower, making the use of margin prudent at this lower strike.

By being able to rescue those puts from assignment I should not actually need to draw on margin to pay for any shares. Basically I should be able to avoid assignment at $26 which will make this a free money trade. Who doesn’t like to earn possibly an extra 4% a year without even using their own money? If I can do this trade 6 times a year it should generate about 4% extra for my Microsoft Stock Trade.

Below are the analytics for the April $28 put strike. Implied volatility is about 26%. The theoretical value of the put is .38 and I sold for .47 making it a decent premium making it about 1.7%. Delta looks very good implying the chance of assignment of Microsoft Stock at around 20%. 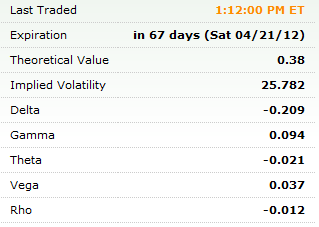 Below is the analytics for the April $26 strike. The theoretical value is .09 cents. I sold these puts for .20 cents. Delta would indicate that the chance of assignment is less than 6%, but April is two months off and although April tends to be among the strongest of months for stock markets, the future is never certain when it comes to investing in risky assets. 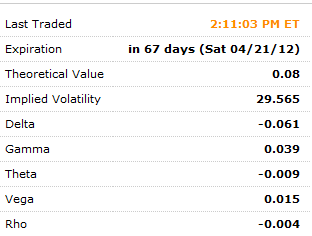 Microsoft Stock has a great trading range. After more than 10 years of put selling against the stock it truly has been a wonderful trading equity for my portfolio. It’s nice to see a lot of analysts getting on board of Microsoft Stock but that being said, I always enjoyed being among those option traders that saw Microsoft for what it truly is, the ultimate utility stock.

Select this Microsoft Stock link to be taken to Microsoft Investor Relations.