My recent Put Selling article received a lot of readers’ interest. I have received dozens of emails asking me when did I start with my put selling, how much capital did I start with, how much margin do I use and literally dozens more. All of them though wanted to know about the compounding effect of monthly income from put selling. In my article on the 12% goal of Put Selling I errored in my 5 and 10 year calculations. I have corrected them thanks to all the readers who wrote me. Nice to know my calculations are being reviewed by so many investors.

In this article I will present how to better understand the compounding effect of put selling. No tax consequences are taken into account as they will vary with every investor depending on their circumstances.

The charts below are from my spreadsheet. The amounts presented are average amounts. Put selling is a strategy of small monthly gains where by the end of the year I aim for a 12% return on my entire put selling portfolio. To get there I sell put contracts each month on stocks that I would own. If assigned shares I sell covered calls against those shares to get exercised out of those assigned shares. I then repeat the process.

While most investors should realize that gains vary throughout the years. Some years I have earned a lot more. I have only had 2 years in the past 35 years where I earned under 12%.

The calculation in the first set of charts below are simple compound based on 12% annual growth through earning 1% a month.

The chart below shows the compounding results of $100,000.00 with the income from put selling being reinvested monthly. The calculation is based on 1% being earned monthly and reinvested. After 10 years of put selling an investor would have realized a 230% total return or 12.68% annualized. 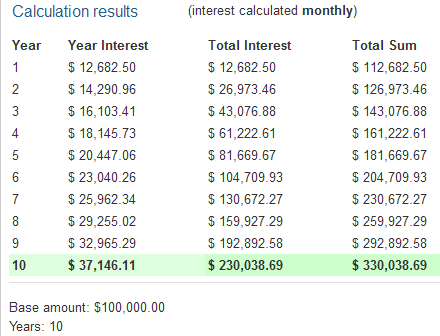 Put Selling though as many people realize varies from month to month. Some months earnings are better than 1% and some months less than 1%. Throughout much of the 1980’s I averaged 1.4% monthly. Here are the results of monthly put selling returns at 1.4%. By earning just slightly more than 1% a month the compounding effect is enormous. In this scenario the investor would have realized a 430% total gain or 18.14% annualized over the 10 years of put selling. 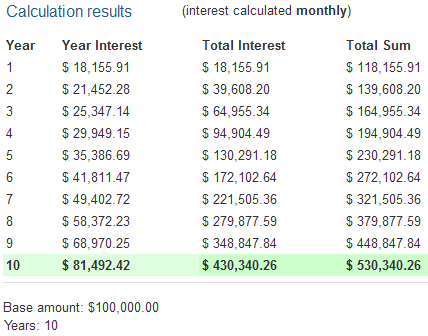 Put Selling And The Power Of Margin

The beautiful thing about using margin with put selling is that there is no interest bearing charges unless, you are assigned more shares then you have capital to pay for. Then you will use the margin to pay for any additional shares. You will then be paying interest to your broker for the margin being used.

However when shares are put to you can of course sell those shares to reduce your margin needs. This will most likely create a loss situation though since shares are not assigned to put sellers unless the stock has fallen below the put strike sold. It goes without saying that an investor needs to consider the risks of using margin and be careful to not oversell on put contracts.

Margin And 10 Years of Put Selling

When I first left my broker he had wiped out 50% of my capital. I started with just $33,000.00. I thought it would be interesting for this article to take that $33,000.00 and see the power of compounding monthly income with the use of margin. Below are the results of using 60% margin each year and aiming for 1% a month in income. As most investors will also add capital throughout each year I have selected to add small amounts of capital annually to show readers the value of adding to your investments. I have rounded up or down all figures.

The final figure shows what percentage is actually being earned on the investors own capital. It is an eye opener what margin can provide.

How I Use Margin In Put Selling

When I was being mentored on the use of margin for put selling, my mentor explained that I could take a slightly bigger risk with my capital and sell puts closer to At The Money or even In The Money, if the market or stock trend was up. I could then use margin to sell puts at strikes further out of the money on many of the same stocks to earn more than 1% in a month.

Therefore if I earned 1.5% on a naked put I had sold, I could sell puts further out of the money for just half a percent (0.5%) through margin and my entire put trade with margin was earning over 1%.

This made a huge difference in my annual returns. This also helped for those periods of time when Put Selling premiums were lower OR those periods of weakness when selling puts at the money meant a higher risk of assignment due to bear markets. Therefore thanks to some months earning better returns, I could sell further out of the money puts through my capital and margin and still earning usually just less than 1% in a month. By the end of the year I would still end up with a 12% annual return on my put selling portfolio.

The Next 5 Years Of Put Selling With Margin

For the next 5 years the investor decides to set aside $200.00 each month to add to his put selling portfolio. This makes a difference as it adds $200 monthly to the investor’s own capital for put selling and slightly increases the margin that can be used each month. Here are the returns from put selling through years 6 to 10.

The power of margin is clear. Used properly and conservatively it has a distinct appeal for put selling against stocks. By Year 9 the investor is earning more in his return than his starting capital. Within 10 years the investor has taken his initial investment of $33,000.00 and turned it into $264,349.00 for an overall return of 701% all through put selling and using margin. This averages out at 23% a year and now you know why I am sold on put selling as a principal investment strategy.