The market direction outlook for Friday was for stocks to move higher.  All three indexes and IWM (Russell 2000) ended higher with the Dow, S&P and IWM setting new intraday highs once again. The NASDAQ meanwhile is within a few points of its 52 week high and still within an easy move of passing 4000. The uptrend remains intact and stocks are continuing to rally higher with the overall indexes. Part of the reason for this is the lack of “bad news”. There has been no real bad news to speak of, just a moment here or there. The lack of a string of bad news means there is little to weigh on investors’ minds.

The Down gained 0.7 percent this week which marked the 7th week of gains which is not the longest streak since January 2011.

Jobless Applications Are Back To Pre-Recession Levels

Another factor in the continuing strength of the rally is the Weekly Initial Unemployment Insurance Claims from Friday which showed that insurance applications are almost back to pre-recession levels.

The drop in the price of gold over the past several weeks down to the $1244 (present) level, is somewhat expected as long as the economy continues to show signs of mending and expansion. The news that a deal has been struck with Iran over their nuclear program is just another reason for gold to fall lower. If we look at the gold price over the last 10 years we can see the crisis of 2008 actually saw gold pull back but then as the belief that the financial credit crisis was just the “tip of the iceberg” set in, gold bugs pushed up the price of gold. This continued as the Federal reserve flooded markets with currency through various Quantitative Easing programs. Then the European issues came to the forefront and the price of gold made another rally to a second high. Even today with the Federal Reserve continuing with its Quantitative Easing program, the price of gold has managed to hang on and not return to 2008 levels. While many analysts believe gold will fall back to $700 if the economy does continue to improve, there is no one who can predict with any accuracy what gold will do. One thing is certain, the lack of a further collapse of the world’s economies has not been gold for the price of gold.  Personally I think gold and gold stocks are meant to be traded according to the direction of the commodity. It is painfully apparent that at present gold is in a bear market. Therefore until that changes my personal preference is to trade stocks like ABX Stock with a careful eye on the downside. I wrote about Barrick Gold Stock earlier this evening which you can read here. 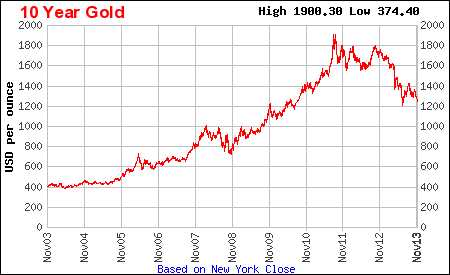 Advancing issues outpaced declining issues again on Friday with 59% of all stocks advancing and 37% declining. New highs picked up the pace with 246 new highs versus 114 new lows. The increase in new highs bodes well for the start of the new week.

Market Direction Technical Indicators At The Close of Nov 22 2013

The most important support line in the S&P 500 at this time in the ongoing rally remains 1750. That support line is holding the market direction up at present. A number of analysts are discussing the 1775 as the new support level but I do not see any support yet at that level.

For Momentum I am using the 10 period. Momentum is still positive but the move higher today actually saw momentum pull back.

For MACD Histogram I am using the Fast Points set at 13, Slow Points at 26 and Smoothing at 9. MACD (Moving Averages Convergence / Divergence) issued a sell signal on Nov 7 which was not confirmed. The signal of Nov 14 was market up and it was confirmed on Nov 15. Yesterday another sell signal was issued which was not confirmed today. Today MACD finally turned back slightly positive with a reading of 0.21. Still though the signal is back up which is a bonus for the bulls.

The Ultimate Oscillator is back climbing into positive territory.

My crystal ball will not see that far into the future but it is rare when the market does not have at least an 8 or 10 percent correction in a year and this year we have not seen that. By adjusting strategies to add in a higher degree of safety I can continue to sell puts and trade in my favorite stocks fully aware that a correction will eventually come.

For now though there is nothing on the horizon that indicates a correction could be imminent. As a result I continue to place more capital at risk. For Monday the market direction appears to be up and we should see more green at the close.

One thing to remember is that big round numbers are difficult for the indexes to cross easily. With the NASDAQ still trying to push beyond 4000, the S&P at 1800 and the Dow across 16,000, don’t be surprised if the market tries to retest these levels more than once in the coming days or weeks ahead.