Greek Debt Crisis is just the tip of the iceberg according to a great article I read today in Forbes online magazine. Hedge fund manager Mark Mobius is quoted in the article as saying that nothing was solved from the last financial crisis and another lurks “just around the corner”.

He points out that aside from the Greek Debt Crisis, global derivatives are probably total $600 trillion dollars with absolutely no regulations and no ideas how damaging they could be to not just the United States but economies around the world.

Mark Mobius manages $50 billion for Templeton in emerging markets, so he should have some idea about the Greek debt crisis and what he is speaking on. He explained that most of today’s derivatives are securitized mortgages made up of futures, options and swaps which almost all major banks are involved in. The Greek debt crisis is just another example of derivatives that are creating losses and financial risk.

Greek Debt Crisis Is A Prime Example Of Derivatives In Crisis

Derivatives have been around for centuries. Basically a derivative is a legal contract that specifies dates and valuations of the underlying variable under which a payment will be made to the parties involved in the derivative contract. The Greek Debt Crisis shows investors that derivatives can be incredibly damaging. When Greece defaults, European banks will face large losses, but the various investors and institutions that hold derivatives based on Greek debt will have substantially larger losses. Greek Debt Crisis is sort of like a multi level marketing company. First came the Greek debt, then the banks loaned Greece the money and then they sold derivative contracts to investors and numerous institutions including other banks as a contract based on the Greek debt.

It was the derivatives that created the financial crisis of 2007 to 2008. In very simple terms it’s a bank or financial institution taking one dollar and turning around and loaning it out ten, twenty or thirty times through various means and contracts. This is exactly what has gone on with the Greek Debt Crisis.

Unless everything works out properly, someone, somewhere is going to lose on the derivatives. Banks loan to citizens, businesses, other banks, financial institutions, investment houses and financial groups. While there was originally only one dollar, many organizations are basically holding a percentage of that one dollar. When the one dollar is lost, it affects thousands of holders who each had a piece of the original pie. 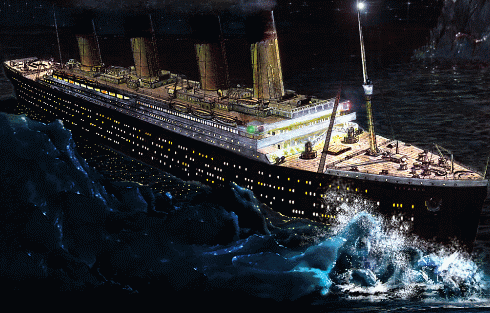 The Titanic is probably the most famous diaster in history. The Greek Debt Crisis and Europe Debt Crisis are Derivatives that could end up sinking much of the financial community and world's economies.

Derivatives Are The Titanic Of The Financial Industry

When it comes to the Greek Debt Crisis, someone somewhere is going to get hurt because eventually Greece will only be able to repay a portion of its debt. Right now the European Central Bank is refusing to acknowledge what is referred to as a haircut, but which I refer to as a default on debt. Instead they are insisting on piling on more debt by loaning enough to Greece to pay its interest on its existing debt.

If you are blind then you are forgiven for not seeing the futility of this strategy. But for the rest of us, borrowing even more money just to make an interest payment is the height of stupidity.

The European Central Bank will eventually be forced to acknowledge that Greece will default on anywhere from 50 to 80 percent of its debt and there will be large losses among banks and those hold derivative contracts.

Federal Reserve Could Be In Deep Trouble

With numbers like these it must make investors wonder if the problem is so large that no one knows what to do about it and therefore it just keeps growing.

To read the article The Next Financial Crisis select this Greek Debt Crisis link.

Greek Debt Crisis Shows Even Fixed Income Is At Risk

There was a time when bonds were considered safe and Bank Certificates or Guaranteed Investment Certificates were believed by investors to be iron clad. The Greek Debt Crisis is showing everyone that this is not the case and that investors need to be careful when investing in everything from stocks to bonds to fixed income of any kind.