Greece cannot afford the living standard that has been built on debt both sovereign and personal. I believe that stock markets and investors around the world are unprepared for the stock market collapses that will happen when Greece defaults. Europe’s Banks which hold at least 100 billion of Greek debt have been moved further down the creditor ladder. The Greek debt crisis, is only part of the Europe Debt Crisis. Ireland debt, Spain debt, Portugal debt, Italy debt are part of the larger picture. The Europe debt crisis dwarfs the scope of the collapse of Lehman Brothers. This is a disaster involving trillions of dollars that will engulf investors around the world.

More than two decades ago I visited Greece and recently I had the opportunity to return to stay with friends. I was shocked at the enormous changes this country has undergone. Many homes are of North American standard and citizens have in many instances dynamited rock to put in private swimming pools. New cars were everywhere and the restaurants were packed every night. I marveled at the austerity which my friends explained is a myth brought about by mountains of Greek debt and Greece’s entry into the European Union.

Entitlement Programs Are A Major Cause Of The Greek Debt Crisis

Greece and many other European nations, cannot afford the living standard and entitlement programs that have been built on debt. They explained that no amount of money in a bailout will work because the real problem is debt both sovereign and personal, that they believe can never be repaid.  They explained the young ages of retirement, large benefit packages and pension benefits, free tuition, lack of taxation enforcement and a way of life that seems to reward those who avoid taxes and increase debt loads.

Buying US Dollars During The Greek Debt Crisis

They explained that they have no investments in European securities, bonds, or currency. They believe that stock markets and investors around the world are literally unprepared for the stock market collapses that will happen when Greece defaults on its debt. They have been buying US Dollars, US Treasuries and US Bonds at a time when analysts everywhere including PIMCO are advising investors to get out of the US currency, treasuries and bonds.

Note how my friends did not used the word “IF” but “WHEN” to describe the Greek debt crisis.

Over the course of my visit they explained to me that Greece owes about 460 billion dollars and that the bailout money is basically borrowing more money that just to pay interest on debt. Basically the Greek Debt Crisis is piling up even more debt to service debt.

One afternoon they invited me to meet a dozen investor friends at their home, who have invested in stocks since the 1970’s. It was a lively and interesting afternoon. None hold any European securities and none are invested in the Euro. They explained that short-term yields on Greek debt are as high as 25%. They told me that 25% tells you how bad the situation is.

Just five years earlier Greek bonds were priced almost on a par with German bonds, which they feel was indicative of bond rating agencies refusing to acknowledge the growing problems of Greece. During the afternoon they told me how, many of their neighbors and friends have more than one car, take vacations outside of Europe, some send their children to private schools again outside of Europe and most pay no income tax. There is an entire underground economy of cash under the table for things like food, home repairs, gasoline, apparel and everyday sundries.

I told them that 460 billion dollars is less than Lehman Brothers owed when they collapsed. Lehman Brothers was around 600 billion in debt. They explained that the difference is that with the first bail out of the Greek Debt Crisis, Europe’s Banks which hold at least 100 billion of Greece’s debt (and a total of 1.5 trillion of PIIGS debt) have been moved further down the creditor ladder. The International Monetary Fund (IMF) and the European Central Bank must be repaid first. From my conversations with my Greek friends, it would seem that most of the first bailout has come from Germany and to a lesser extent a handful of other European countries. They also explained how the debt of Greece is now as large as that of Canada, yet their economy is small when a comparison is done. They expressed total disbelief that this debt will ever be repaid and doubted that the other heavily indebted nations like Ireland, Portugal, Italy and Spain would ever repay as well.

The banks of Europe are a pillar of the investment world, just as they are in America, Canada and pretty much every country. Banks are important whether consumers like it or not. When Greece defaults the losses to European Banks will be devastating. But much worse will be the perception by investors that European Banks just like American Banks, are in trouble, and fear will create panic with far-reaching repercussions. They explained to me that the fear of default is very real among European investors. They believe that upon default, investors will look at Greece as only the tipping point. They explained that investor perception about Ireland, Portugal, Spain and Italy being the next to default will plummet risky assets worldwide.

How To Resolve Greek Debt Crisis

Asked what if anything can be done, they told me that people have to realize that taxes must be paid by both citizens and companies and it needs to be collected by the government. They also explained that Greece must lower their living standard to better match the real Gross Domestic Product (GDP), which they agree will cause unrest among the population. But they believe it is the only way the nation has any hope of repaying some of the debt let alone manage to reach a surplus to aid in reducing the debt burden and pay the interest on the debt.

They also feel that staying with the EU is a mistake, that Greece was better without the Euro and their own currency was much more competitive giving them an economic “edge” that they no longer have. Last they explained that the Greek Government must be held accountable for dishonest projections, accounting practices and frivolous subsidy programs. They believe however, that their fellow Greek citizens are unwilling to make the sacrifices needed to calm the situation and get their “house in order”.

The chart below shows that this isn’t just a Greek Debt Crisis problem. The European Union is rapidly reaching the debt of the United States. While the United States is still able to make payments on its debt, European countries like Greece, Ireland, Portugal, Spain, Italy and others are having problems meeting their debt interest payments. Note on the chart how Germany is at 142% of GDP but with their booming economy they can continue to service their debt. France at 182% will soon have trouble. Italy at just 108% is having trouble as they do not collect enough in taxes, have too many entitlement programs and cannot afford the living standard their entry into the European Union has created. 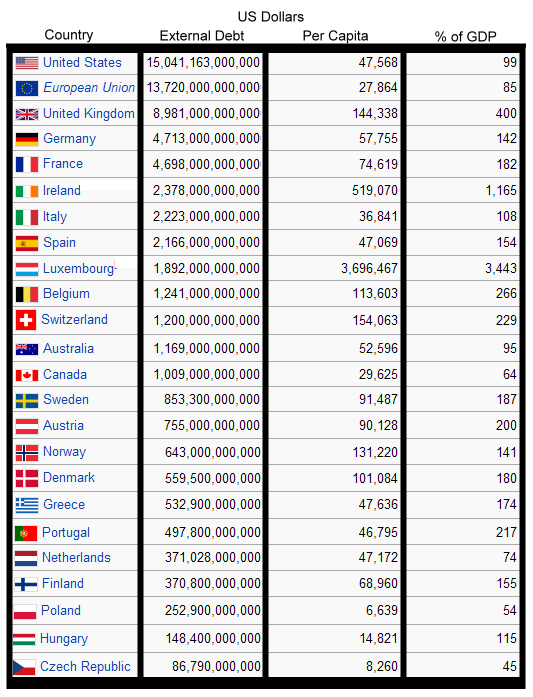 On June 1 2011, Greek debt was downgraded again, putting it deeper into junk status. I wrote this opinion piece because I do believe that Greece will have no recourse but to eventually default. My Greek investor friends could indeed be correct about the Greek Debt Crisis. Even if they are just half right, the markets could be in for a calamity.

Greek Debt Crisis is a Reason For Buying Puts

Remember that it is fear that drives markets up and down and the Greek Debt Crisis will cause a lot of fear. Fear of missing a rally and fear of being caught in a downturn. For investors who wish to remain long-term in stocks, perhaps consider some puts for protection. You can read part 4 of the article on dividend stocks that cut dividends which discusses the merit of buying insurance through purchasing long-term puts for catastrophic, unforeseen events.

It is often better to be prepared should the Greek Debt Crisis indeed have dire consequence putting markets into panic mode such as most investors, including myself, have never witnessed.