In Part 1 of this article on put selling strategy for Coca Cola Stock when over-valued, I explained how I look at a stock and pick percentages from past bear markets to determine present put strikes to consider for put selling.

In Part 1 I explained how a severe correction could easily result in a 20% correction and a market collapse could see a decline of up to 43% in Coca Cola Stock. By looking at Coca Cola Stock past, I can get some idea about what the future may hold for KO Stock.

Coca Cola Stock Applying The Past

The high in Coca Cola Stock for 2011 has been $71.77. For my calculations I select $72.00. Applying past Coca Cola Stock decline percentages is straight forward. A 20% decline from $72.00 in Coca Cola Stock would be $57.60. A 43% decline would be $41.00. I now have a good idea about what I might expect when Coca Cola stock takes a severe correction AND what could happen in the event of a market collapse.

The chart also shows that $41.00 is deep in under-valued territory so the likelihood of my getting Coca Cola Stock assigned at $41 is fairly small. I would therefore be happy to have shares assigned at $45.00, which again is close enough to $41.00 to make a compelling argument.

The mid-point between these two strikes in Coca Cola Stock is $50.00.

Coca Cola Stock And The 3 Steps To Put Selling Success

Once I have my put strike levels, the put selling strategy takes 3 steps.

If Coca Cola Stock should turn down suddenly and I am assigned at $55.00, I would immediately look to sell puts at $50.00, BUT I would also immediately sell covered calls on assigned shares, in case the stock ran back up and I could earn a capital gain AND have my capital released to start again. Looking at the Coca Cola Stock chart above you can see how often the stock has moved up and down even when it was in a long downward trend. For example in 1998 the stock began a decline which did not end until 2006. During that period of 9 years KO stock fluctuated widely and if you look at my strikes listed on the chart, you can see that I was often in and out of the various strike levels in Coca Cola stock despite it being in a very long bear market. From 1998 to 2006 I averaged 18% a year in Coca Cola Stock through selling puts, being assigned shares, earning the dividend and selling covered calls to be exercised and then starting over. The put strikes above ($55, $50, $45) are the three values I continually sold over that 9 year period. In 2007 to 2009 I again sold puts at all three strike levels and was assigned shares at various times, at all three values.

At 18% a year over 9 years my capital that was committed to Coca Cola Stock trade, almost tripled in value since I was never holding shares at levels that were over-valued.

However the ONLY way an investor can make this type of profit is they must have confidence in the stock AND be willing to sell the puts while the stock plummets down and flies back up. It is a wild ride but without confidence that the stock will recover and that the strikes being selected and sold are the proper ones, an investor will get hammered on any stock including Coca Cola Stock.

Therefore if an investor contemplates a stock such as Coca Cola Stock BUT when the stock falls the investor second guesses selling the put strikes the trade cannot function properly and investors inevitably worry as the stock falls and will often sell out for a loss. There is NO point is getting involved in the trade in the first place IF the result is to sell at a loss when the decline become more severe. In my case in 2008 I had Coca Cola Stock assigned at $55.00 then $50.00 and finally $45.00 as the stock literally fell apart in the market mayhem.

If An Investor Believes The Worst Then Losses Will Be Taken

If an investor has no confidence and believes the worst then it is always best to sit out any bear market. It is not worth ANY gain if an investor cannot stomach the volatility and the sleepless nights that a plunge in any stock can bring. At one point I had $145,000 of capital stuck in Coca Cola Stock and if I had sold in Feb 2009 the loss would have been $27,990.00 in Coca Cola stock capital, $17,400 to close Coca Cola Stock option positions for a total loss of $45390.00 or 31%. Instead I ended up with a cost basis of $48.33 in 3000 shares of Coca Cola Stock and in September 2009 I was exercised at $52.50 for a capital gain of $12,510 in Coca Cola stock and over 11,000 in options income and dividends earned during that period.

I believed strongly that Coca Cola stock would recover so I was quite content selling puts, getting assigned, selling calls, earning the dividend and repeating the cycle, but consider the 16 year Coca Cola Stock chart above and look at the volatility over the period from 1998 forward.  My Coca Cola Stock Strategy is not for an investor who is worried that the stock is going to $20.00 or $10.00 or even zero.

Once the stock commences falling, the plan is to sell puts at these levels ($55, $50 and $45) and if assigned, to end up owning shares at these three strikes BUT own smaller amounts at $55.00 and then larger amounts as the stock moves lower.

However remember the goal of put selling is to sell puts for premium while avoiding assignment as long as possible. However in a severe correction or a market panic it is often inevitable that assignment will take place which is why it is important to sell smaller lots of puts at the higher value and more puts as the stock falls to the under-valued put at $45.00.

As the stock continues to climb, I sell puts on dips in Coca Cola Stock with larger quantities of put contracts. I use market timing technical indicators such as the 10-20-30 moving averages trading strategy to warn when playing the dips could be a mistake. Any investor can use such a simple market timing indicator of moving averages OR use the lower highs and lower lows strategy to realize when the stock is beginning its decline.

I am using large put contract quantities since I close the put contracts without waiting for expiry. The goal is to sell the puts and earn a quick profit on the put selling and then buy to close the sold puts and bring my capital back out of the market.

When the inevitable decline happens in the stock, it is best to stay away from put selling until Coca Cola Stock reaches my put selling strikes. At that point I would start put selling at my preferred strikes ($55, $50, $45) and stop put selling against the dips in stock.

With the above three steps in mind I have now commenced my change in the Coca Cola Strategy. 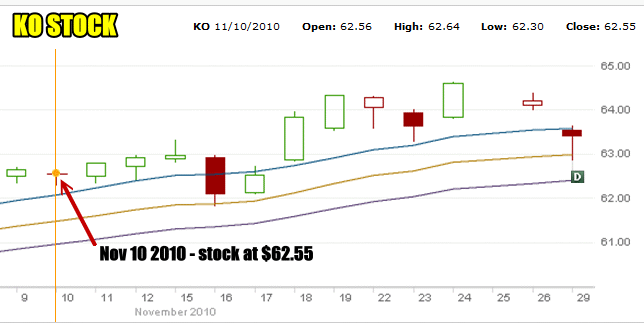 This year Coca Cola Stock has been strong even during the market pullback since May. Volatility this fall has pushed up option premiums and Coca Cola Stock is no exception despite its strength. On Nov 21 2011, with Coca Cola Stock trading at $65.95, I sold 5 naked puts at the $55 strike for January 2013 options expiry for $3.20 or a return of 5.8%.

By earning $2.81 now my entry or cost basis should I be assigned shares is $52.19 moving me closer to $50.00, which is my second entry-level where I would accept shares. If the stock fails to fall by January of next year I have earned a return of 5.8% on the 5 puts which in this ultra-low interest rate economy, is quite good.

I am also now selling puts on dips in Coca Cola Stock and then closing them when I feel comfortable with the return I have made on them. I do not intend to keep any puts sold on dips open until they expire. The chance of being assigned shares in over-valued territory is not worth the extra income I could earn by trying to hold the puts until expiry.

As well on November 28 I sold 10 Naked Puts for Jan 2012 expiry at $60.00 for .70 cents. Both of these trades occurred on the dip of Coca Cola stock on Nov 28. The chart below for Nov 28 shows that Coca Cola Stock is continuing to exhibit Higher Lows, a sign of strength in the stock despite the present bear market. 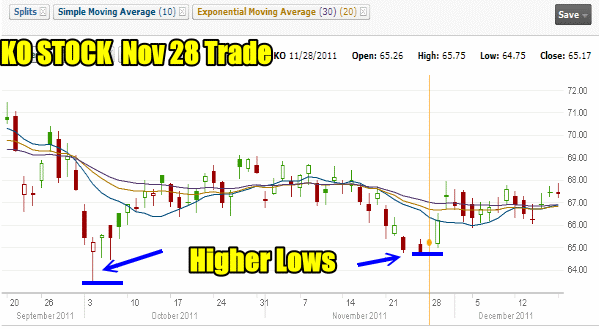 When a stock moves into over-valued territory, there are significant advantages to continuing to sell puts against it. The most obvious is the strength of the stock as it moves higher, reduces the chance of assignment to the put seller. However stock charts show that over-valued stocks once they turn back down, fall quickly and can leave put sellers either closing sold puts for large losses or ending up being assigned shares at over-valued prices. Once assigned shares at over-valued price, it is difficult for the investor to sell covered calls for reasonable premiums while hoping for a rise back in the stock to be exercised out of the shares.

Therefore as explained, being assigned shares in any stock at over-valued levels, immediately puts an investor at a strong disadvantage which may take years of selling options to eventually just break even on a losing trade.

Instead the put selling strategy I have outlined, which I use when a stock is over-valued BUT I want to continue put selling against, means I have a very good chance to earn strong profits and if assigned shares, be exercised out of them without waiting possibly years for a stock to recover.

If assigned shares such as I was in 2008 – 2009 in the market crash, the put seller brings in both the dividend and covered call income because he has sold more puts at lower levels averaging his stock price low enough to allow covered call selling to be profitable and practical. Then once the stock begins a recovery, the put seller has confidence that he will be exercised from the stock because of his lower valuation, rather than having been assigned at such a high valuation that all the rescue strategies being applied are basically just trying to reduce his cost basis in the stock to the point of where he can break even and get out of the stock.

This strategy now being employed in Coca Cola Stock, is the exact strategy I have used for many stocks over the past three decades. No matter how strong the stock appears, eventually it will take a turn back down and as you have seen, Coca Cola Stock was in a bear market for 9 years. Being assigned at too high a valuation in any stock not just Coca Cola Stock is absolutely unnecessary if investors take time to study put selling strategies such as the one I have outlined here.