Coca Cola Stock (KO Stock) has been a favorite of mine since 1982. In May 2009 I commenced selling Coca Cola Stock put options on my website fullyinformed.com. You can view the 2009 KO Stock trades here.

Bear markets can last longer than many investors realize. However fund managers and investors with a lot of capital continually look for areas to put their money to work despite market conditions. With the doubt remaining over Europe’s ability to manage their debt crisis, stocks have had a very tough 6 months, but at the same time markets could be a lot lower.

During these past 6 months fund managers have put capital to work in large cap diversified companies that they consider defensive. One of those stocks has been Coca Cola Stock. It makes sense for them to do this as these stocks have a history of surviving bear markets, and even in a market collapse, they sometimes hold up better than many other stocks.

The advantage to selling puts against uptrending stocks is obvious. The chance of assignment is reduced. The disadvantage to selling puts against over-valued stocks such as Coca Cola Stock is that if the stock turns suddenly and the investor is assigned shares at over-valued prices, the investor can spend years selling options to reduce his cost basis until he breaks even and gets out of the stock. Being assigned shares at over-valued prices means investor’s capital is tied up trying to break even on a trade rather than grow and compound their capital.

With Coca Cola Stock now over-valued I need to put in place a new put selling strategy that allows me to continue to earn income from my put selling while protecting my capital from assignment at over-valued prices.

This means its time for a change in my Coca Cola Stock put selling strategy. I have no interest in being assigned at higher valuations in Coca Cola Stock. The strategy I detail out below and into part 2, I have used for 3 decades. It allows me to continue put selling against great companies while at the same time reducing my chance of assignment at over-valued prices.

These 2 steps can be applied to ANY stock which an investor feels is over-valued but which he wants to continue to sell puts against.

The first thing I do is look back at the history of Coca Cola Stock to determine:

A) What valuations would I accept shares. In other words where would I be happy to be assigned shares in the event of a severe correction and/or panic with the confidence that I can sell covered calls to be exercised out of those shares. I need to know that if I am assigned shares without the chance to buy back my puts and roll them lower, I can get out of the stock without a loss through selling covered calls or averaging down and then selling covered calls. There is no way that I want to be assigned shares at high levels only to find that the stock falls 50% from where I am assigned and I have to wait months to years for a recovery. I need confidence that I am selling the proper put strikes in the event of a serious market decline.

B) How much did the stock fall in previous bear markets. In other words, what types of declines can I expect in the future based on the past. If I can understand the percentage of declines in Coca Cola Stock that have occurred previously then I have confidence during severe corrections that I have sold and can continue to sell the correct put strikes. IF I HAVE NO CONFIDENCE IN A DECLINE then I would make the mistake of buying back my sold puts at what would probably be losses. It is by understanding WHAT TO EXPECT in the future, that I can sell put strikes now AND NOT SECOND GUESS those strikes when Coca Cola stock goes shooting past me in a decline. It is confidence that gives me, as an investor, the ability to earn substantial profits while other investor flee panicking markets, usually with large losses.

Coca Cola Stock Peering Into The Past To Predict The Future

Remember that these steps can be taken with ANY stock that an investor feels is over-valued but wants to continue to sell puts against while being aware that selling puts on over-valued stocks can be a dangerous strategy without a proper plan to handle pullbacks.

To answer the above two questions I want to first look at the past Coca Cola Stock charts during severe corrections and bear markets to determine the percentage of declines the stock has experienced. 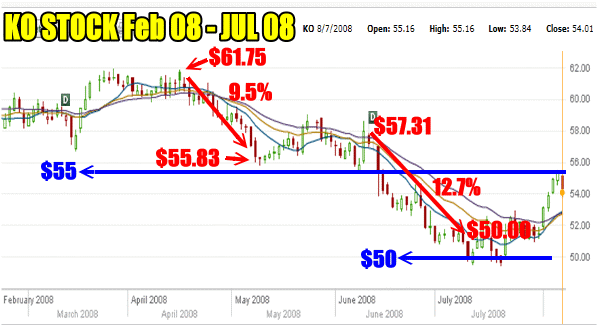 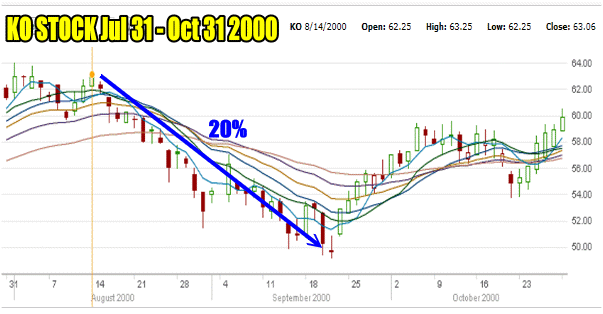 Next I like to make a third check. While many investors have probably forgotten, 1997 saw some significant declines in the markets and those declines affected Coca Cola Stock with a loss of 21.4%. 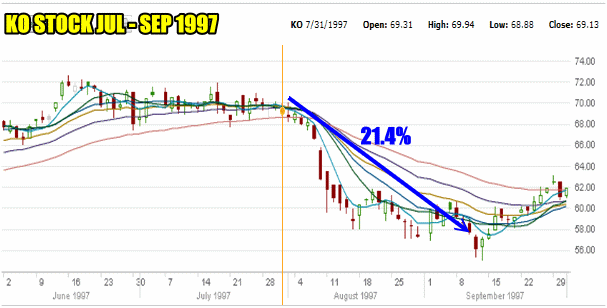 Coca Cola Stock Chart Shows Almost A Repeat Performance for 1997 with a 21.4% decline.

Therefore based on the history of Coca Cola Stock I should expect a fall of at least 20% when there is no panic, but a severe correction. When checking Coca Cola Stock against this year (2011), I can see that there have been two large losses, but none on the magnitude of 20%. 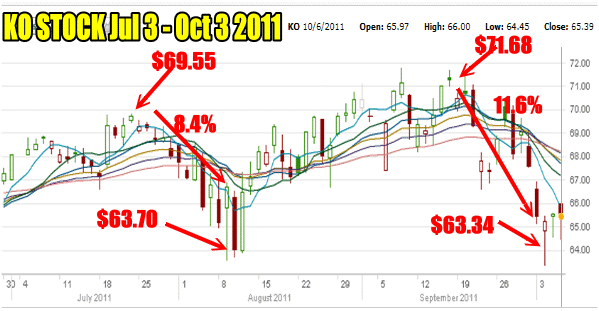 To determine KO Stock losses during market collapses I went back to the bear market of 2008. In that market collapse Coca Cola Stock lost 31.9% of its value. This amount has to be added to the severe market correction of 20% which occurred in the same year. Therefore the total collapse of the stock was about 50%. 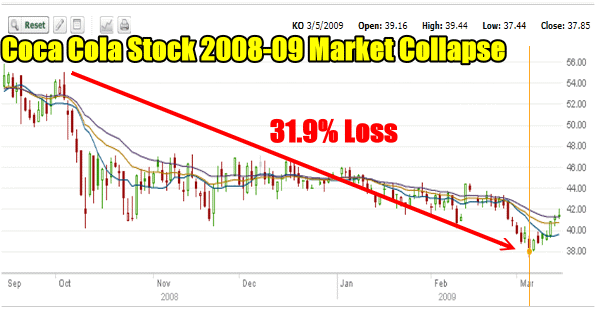 Looking further back once again Coca Cola Stock lost 30% in 2001 after losing 20% in value just months earlier. This totals 50% decline in value. 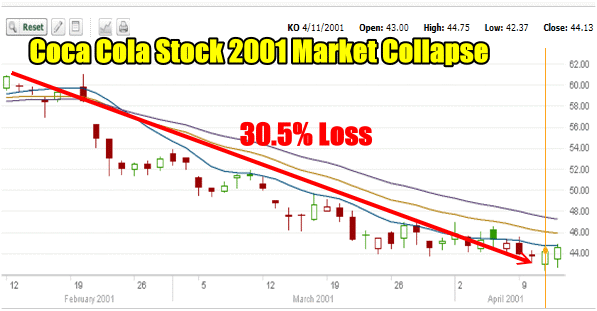 A market collapse in general over the past 15 years has seen Coca Cola Stock lose on average, 30% in a market panic.

To prove the value of planning ahead, take a look at the Coca Cola Stock chart below, from 1998 to 2004. During this 7 year period the stock suffered an incredible bear market which saw the total loss of the stock reach 56.9%. Without having a plan an investor would have experienced serious losses in what is actually a great stock. The problem for most investors is failing to realize that just about every stock has seen its share of bear markets.

Yet when you study the chart below you can see that Coca Cola suffered many 20% declines over that 7 year period and many 20% recoveries. Therefore there was no need for an investor to steer clear of the stock. Those of us who want to trade in such a stock can realize significant gains through the stock’s volatility and by selling put strikes during stock pullbacks and then buying to close those puts on the stock’s rise, all within the context of what is a lengthy, grinding decline in stock value. As well by continuing to sell puts lower and lower as Coca Cola Stock fell I was able to eventually accept shares at prices as low as $40.00 which can then be sold in the next jump in the stock.

The key for success in any stock is planning and preparation so that the strategy being implemented already has the outcome established. The importance of strategy cannot be understated. If an investor has some idea about what to expect in the future on a stockm he is better prepared to profit from those movements rather than sell for losses. Planning is essential if an investor wants to profit and grow his portfolio annually. This Coca Cola Stock link shows a chart back to the 1980’s. I started investing in Coca Cola stock in 1982.

Coca Cola Stock suffered a Severe Bear Market from 1998 to 2004 during which it eventually lost 56.9% of its value.

By examining the above historic Coca Cola Stock charts I can therefore plan on a decline of 20% in the stock price during any serious correction and a total of 50% decline in market panics. By working with the percentages I have learned from past historic charts, I am now able to prepare for future price action in Coca Cola Stock and profit from them.

In Part 2 I explain how by using this historic data I am able to plan an effective strategy to profit from movements in Coca Cola Stock despite the stock presently being over-valued.