These are trades I did following the March 2009 final collapse of the Bear Market. Most of 2009 was spent trading into stocks that had collapsed following the ferocious bear market that started in 2007.

A stock market decline like that seen from July 2008 through into March 2009 are rare events. A decline that large usually is followed by an enormous run-up. It’s a rare chance to purchase stock at what I consider fire-sale prices and hold it for a few months to a year without covered call writing and then sell the stocks for large profit gains.

It is for just such events like the 2008 to 2009 market collapse that I keep 30% of my entire portfolio waiting in cash. There have been opportunities to put my cash to work every few years and over the past 10 years this marks the second huge collapse in share valuations. It only takes a couple of events like these to make my cash holding very worthwhile. Once I buy the shares I picked up at amazing bargain prices I hold for a short period and then sell these shares and return my cash to its safe nest waiting for the next opportunity.

Naked Puts and Covered Calls work well, but in a rapidly advancing market following a huge collapse, I believe buying and holding stocks for a short period is best. The last such market rapid advance was in Feb 2003 where my returns on my cash were 103%.

Here are the indicators I followed which seemed to point to a market up turn after the March 3 decline.

Lack Of Assignment On My Naked Put Contracts

The next indicator was the number of naked puts I had written for Jan and Feb. They had all expired worthless. This is unusual for me if we are in a bear market. Normally on so many positions I will be assigned at least some contracts when we are in a declining market. However Jan and Feb I was not assigned at all. This told me that the decline could be reaching a climax and the Bollinger band by Mar 3 was at its narrowest.

The last time the Bollinger Band reading was this narrow had happened in Nov 2002 to Feb 2003 when the market was still being called a bear market. In Feb 2003 I had gone in and bought stocks and then worked with a stop-loss, but I did not sell CC’s at that time. This was another reason in March 2009, to buy the stocks I did.

My own technical indicators of the Ultimate Oscillator and Fast Stochastic both flashed oversold conditions and indicated that the market was going to climb or at least bounce from here. In the chart below you can see how each reading was higher than the previous trading day. In particular look at how quickly the oversold condition left the S&P 500 showing that buying was underway.

The Fast Stochastic on Feb 27 2009 has a ready of 0.41 on the S&P. This is an incredibly low reading and normally this type of reading is followed by a bounce. Each successive trading day the Fast Stochastic reading improved. These readings started Feb 27 which told me that buying had commenced in a big way in the market. 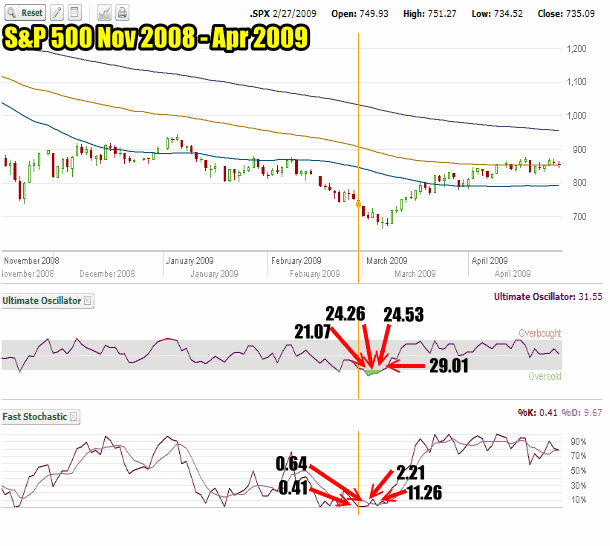 While it is true that the 10-20-30 moving averages rule did not give a buy signal in early March, the 10-20-30 rule (click to review 10-20-30 strategy) did show that the 10 day SMA was turning up and volume was picking up after the plunge around March 3 2009.  Also I use the 10-20-30 rule primarily to buy and sell naked puts not so much for stocks although I do plot it before buying stocks. This 10 day SMA (Simple Moving Average) was turning up on all the stocks I follow, not just a handful. This told me a trend change could indeed be happening.

As well the bearish indicator was at an all time high. The number of bearish analysts was more than 70%, normally a sure sign to me that we are going to see a reversal.

Also the PE ratio on the S&P was below 12X, and dividend yields were very high.

Bank of Montreal in Canada was paying over 10% on the dividend. Royal Bank was at 9%. In fact all the large Canadian Banks had unbelievable dividend yields. At 10% on Bank of Montreal, you could buy it and tuck it away for years – which I did for my grandchildren. The dividend alone would pay you to hold the stock.

The last 15 bear markets had seen a PE of no lower than 10.8 on the S&P. I felt that buying when I did, made sense as I saw little more downside, but if there was I believed I would be able to sell CC’s against my stock purchases.

In November 2008 Laszlo Birinyi called an S&P bottom at around 750. In January he reiterated his position and again on March 3 he said the market was extremely oversold. However one thing that did catch me was that all three times he indicated that all the usual technical models were not reliable this time, down.  Here is what he said: “A few things caught our eye. One was, that we started to have some very bad days in November (2008) but the market still recovered. On Dec. 5 (2008), the unemployment news was really terrible and yet the market recovered that day, with the S&P closing up 3.7%. To us, those are signs of a positive market where people are starting to look beyond the bad news.”
He also indicated that the greatest decline in a bear market are at the end of the bear decline at around 70%. He then named some companies he liked, including GE, with a dividend yield then of 8% on the common stock. I have found Laszlo Birinyi to be accurate on many of his calls. I used to watched Louis Rukeyser on Wall Street Week when I was younger (as was Laszlo) and Laszlo was on often. Sometimes he would be the host when Louis was away. I really miss that show.

Last was the VIX. If you look at the VIX chart, you can see that the climax in volatility was actually in October 2008 not March 2009, and from there is had continued to decline. On October 20 the VIX hit a high of 89.3, but on March 3rd it only hit a high just above 52. The trend in the VIX was down. This told me that the sellers were getting tired. Just like the rally since March, the VIX had continued to decline throughout the rally. You can see it in the premiums of options, that continued to decline. Right now (March 13 2009) I think the VIX could work its way to 20 over the next 6 months, which is where it was last August 26 2008.

Here are the stocks I bought in March 2009 and sold August 19 2009. After August 19, I returned to my usual strategy of covered calls and naked puts and put my cash back under lock and key. This is the reason for my strategy of holding cash and the reason why having a plan is so important when it comes to investing.