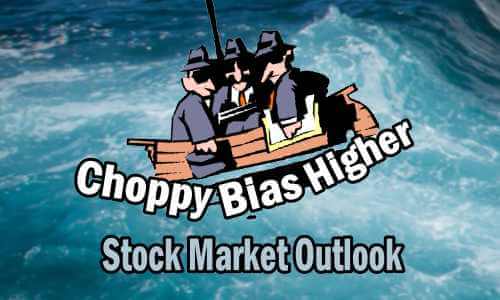 Friday was all about fake news from ABC that fired National Security Adviser Michael Flynn was prepared to testify the Donald Trump instructed him to make contact with Russians during the election. The report of course was false but Flynn did plead guilty to one charge of lying to the FBI. The media had a “field day” and stocks plunged mid-morning. The 5 day chart below shows the effect of the erroneous news as all three indexes collapsed. The Dow gave back all of Thursday’s massive rally. When it became more apparent that the news was in error the market regained its footing and moved higher. By the end of the day all three indexes were sitting with only slightly losses after what was a wild ride.

Chart Comments At The Close:

On Friday despite the false news the S&P managed to regain its composure and it close back above the Upper Bollinger Band, another bullish signal.

The long red candlestick left at the close of the day is bullish for the following day.

The drop in the S&P on Friday did not reach the 21 day moving average which is also bullish.

All the major moving averages are still rising.

Momentum: For momentum I use a 10 period when studying market direction. Momentum is positive although it turned down due to Friday’s selling.

MACD Histogram: For MACD Histogram, I am using the Fast Points set at 13, Slow Points at 26 and Smoothing at 9. MACD (Moving Averages Convergence / Divergence) issued a buy signal on Nov 28. The up signal remains strong for Monday.

Relative Strength Index: The relative strength index is set for a period of 5 which gives it 5 days of market movement to monitor.  It often is the first indicator to show an overbought or oversold signal.  The RSI signal is at the highest level since Oct 20. At that time the market dipped with a reading this high. The Relative Strength Index (RSI) is moving more sideways than up or down.

Rate of Change: Rate Of Change is set for a 21 period. This indicator looks back 21 days and compares price action from the past to the present.  The rate of change signal is positive and moving more sideways indicating that not much change in prices is expected for the start of the week.

Support Levels To Be Aware Of:

The 2600 level started to build some support on Friday when the market fell on the false news regarding Flynn and Trump but it did not break through 2600. Instead it rebounded when it fell that sharply.

There is good support at the 2550 level which could assist in pushing the index higher in November.

For Mon Dec 4 2017 the Stock Market Outlook is set for another day of choppy trading action but aside from the Slow Stochastic, the outlook is still up for the index. The passage of the Tax Reform Bill may get a bit of a bounce as well on Monday but I would watch for signs that the bounce may not hold and following the passage of the final bill, stocks may move a bit lower. Monday though appears higher for the indexes but choppy trading which could at times be negative, should be expected.