The problem with my Spy Put trade for today was that I had not purchased the spy puts yesterday at the close or near the close. Instead most of the day I was busy looking at charts trying to see what positions I would like to put in play for October.

So today I decided that with the volatility index (VIX) already up over 41.00 I would rely on the ultimate oscillator to time entry and exit points for my Spy Put Trade.

Overall the trade returns were not spectacular despite the market being down over 500 points, but that was also in part because the market opened down and there never really was any large plunge during the day. Yesterday had a much better selloff than today and the SPY Put trade would have performed better yesterday.

The chart below shows the past two days in the SPY. Wednesday saw a terrific drive off the cliff, late in the day with the news from the Fed and the woes out of Europe hitting the market. This spiked volatility and led to great spy put premiums, but also meant if I had bought spy put contracts even in the early afternoon, the returns would have been much better than today. Well hindsight is wonderful but it won’t add to my profit so today I decided to use the ultimate oscillator entirely.

You can see in the chart that the spy was actually pretty flat for much of the day today making spy put trade profits sparse during the day.

Below is today’s chart which shows today’s Spy Put trades. Realizing that I had not bought spy put contracts yesterday I increased my day trading, spy put contract purchases from my usual 10 to 20. This actually worked out well and assisted my returns greatly.

Then around 1 PM the overbought indicator again appeared and I bought 20 spy put contracts at 113.31 and shortly thereafter I sold them at 112.86. Again just a small profit. 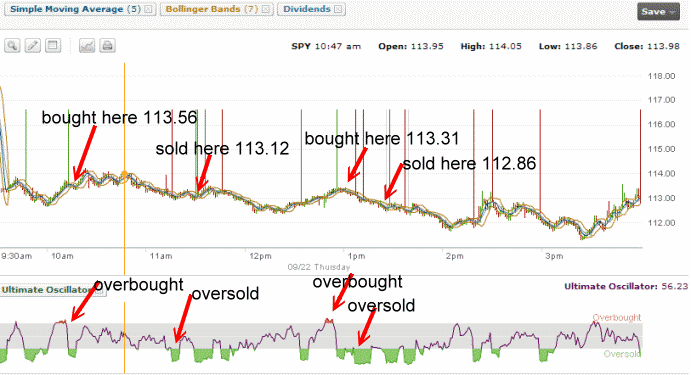 Today’s action while not all that profitable, assisted in recovering the losses from my recent loss in the SPY. My cash cushion is now higher than before my recent loss and I am ready to put in place my spy put hedge again, should the need arise, which I believe could be by early next week.

I imagine we could rally a bit after the last two days beating, but longer term the trend is still lower.  You can read my market direction guess for today.

I am still of the opinion that the range we are stuck in will break to the downside and the S&P 500 will test the 1000 level. I will certainly have my spy put hedge ready when that occurs.