Once in a while a trade comes along that repeats a classic profitable pattern. It follows an exact pattern that I have seen so many times in the past that I just know the outcome of the trade. Today’s SPY PUT final trade was exactly that, it was truly classic.

April 9 started with the market falling from the open. The opening drop was a little over 1% at the start and marked the entire day’s tone. In my weekend market timing column I had indicated that there was more selling to come this week and I expected today would see the market try to test 1375 on the S&P 500. You can read that market timing column here. Since I expected selling I had also mentioned how I would be doing my spy put trades this week as long as the market continued week.

The spy put trade started with the first reading of a strong overbought condition around 10:20 AM. However the overbought condition continued and the overall market continued to climb. It was obvious to me that I had bought the spy puts too early and would need to sell them into weakness and close the trade. Around 10:40 the market pulled back and I sold the first set of SPY PUT contracts for a very small profit.

Two more trades followed with small gains but the best trade commenced around 1:20 when the S&P seemsed to stabilize and traders moved in and pushed the S&P higher. The rally continued right until 3:00 PM. It was the best movement of the day and I spotted the classic pattern immediately. This classic pattern is where traders, not seeing any extension of the selling from the morning, step up and push the market higher but once that push is done, traders sell their positions into the close as traders do not want to hold positions overnight.

The chart below shows the day. The 3:00 PM purchase of SPY PUT contracts was classic in every sense of the word. The mood of the market was poor and it was obvious that the push higher was going to end with a sideways movement and then a push lower right into the close.

On the chart below you can see a long red arrow that stretched from the open to the close. This arrow starts at the first gap down in the morning.  At the close you can see that the market sold off and fell back below the gap down from today’s open. I marked this on the chart as when the market has a gap down right at the open I always mark the first open. I have found repeatedly that any attempt to push higher than that gap open within the last hour of trading almost always meets with failure. On the chart you can see that the market did push BEYOND the morning’s gap open. Once traders did this I only have to wait for two tops to appear, one lower than the other. That’s the sign to buy spy puts for the coming sell-off into the close.

In today’s market action traders pushed the S&P to a top shortly before 3:00 PM which I have marked 1st. Then they tried for a 2nd time to push higher around 3:00 PM. I have marked this as 2nd and it was a lower high.

That 2nd push failed to create a higher high and with that traders knew that the move up was over. I immediately bought my spy puts. This is classic day trading. The move up to the 1st arrow must be followed by a second push that moves higher otherwise every trader knows there are just no more buyers. When the 2nd move up couldn’t push beyond the 1st top, it was obvious that traders were not interested in additional buying to move higher.

This marked the end of the rally that had started around 1:20. As the mood was poor and my market timing indicators on the weekend had signalled a down market, I held right to the close as it is rare after such a rally top, for the market to suddenly turn around right at the end and push back up.

When I saw the push higher from about 1:20 to 3:00 PM I knew I had to purchase 30 SPY PUT contracts rather than the usual 20. With a move up and the 2nd top being a lower high, any investor aware of the overall daily trend knows that traders will be selling into the close.

With 30 puts purchased I held until the end of the day and sold my last spy put trade for today. I was pleased with all 3 prior trades but the last was the easiest since the usual pattern of run-up and then sell to the close, was easily spotted and I could purchase more spy puts as a result. 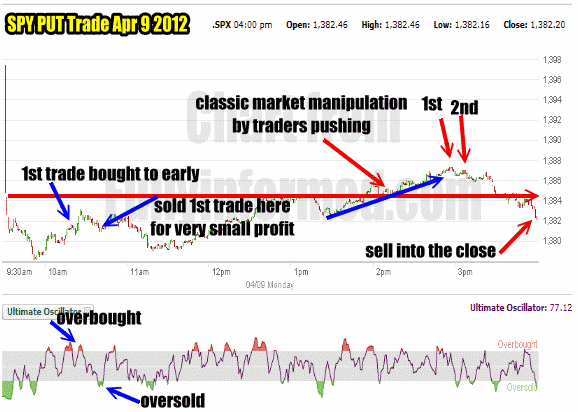 It is not often when the market provides more than two spy put trades in a day. Today’s market action shows that the market is preparing to test support at 1375. If the selling continues tomorrow, the S&P will easily fall to 1375 and then investors will find out if there are any dip buyers willing to step in and purchase stocks again to support the market.

The purpose of the SPY PUT trades is to build up a cash cushion for those periods when the market will be weak and I may need to protect my positions. Today’s trade assisted in growing that cash cushion.

When classic patterns emerge such as today’s afternoon push by traders, it is important that I take advantage of that opportunity which is exactly how the day ended.