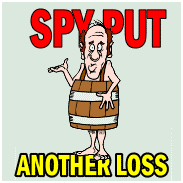 Let’s review the latest SPY PUT Hedge and see what happened. On Tuesday March 6 2012 the Market had its worst day since early December 2011. It fell over 1.6% and startled a lot of investors. The market had moved down for a couple of days but there really wasn’t much to be concerned about. The VIX remained around 17.26 and then selling set in and the VIX spiked to 21.24 by 3:00 PM. Volume rose as the day progressed.

The first SPY PUT Hedge trade I did was on that day. It was very typical. The market opened down and had a small bounce early in the morning. I had to change my Ultimate Oscillator to read 1 minute from 5 minutes and flip back and forth between the SPX (S&P 500) and the SPY charts to get better and clearer oversold and overbought signals as the selling was constant enough to keep the market from having much bounce either way.

I bought SPY PUT contracts twice in the morning. I bought 10 contracts around 10:30 PM and another 20 SPY PUT Contracts an hour later. Both of these spy put purchases were done with overbought signals from the Ultimate Oscillator readings. 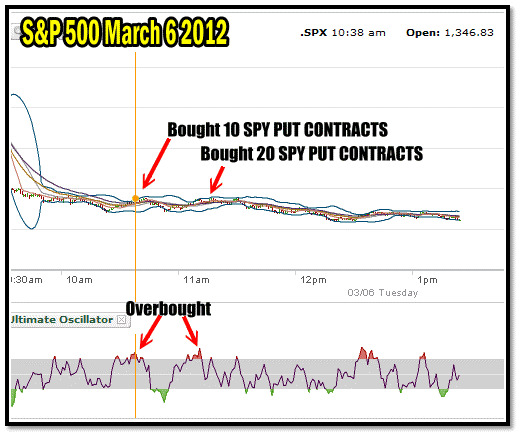 The above chart shows the two overbought signals that I selected to buy SPY PUT Contracts. I picked the spy put April 21 at the $135 strike. 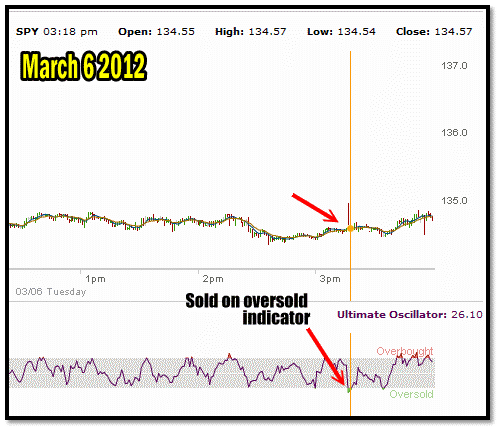 The Afternoon finally saw a solid oversold signal and I sold all 30 spy put contracts.

Around 3:20 PM in the afternoon I sold all 30 SPY PUT Contracts. While it was not at the bottom for the day, it was on a clear oversold signal as you can see in the chart above. With the selling continuing but the market not moving much lower it looked to me like the dip buyers were busy buying. I decided at that point to sell my spy puts and buy shares in a few stocks and do some put selling on others. Many of the stocks I follow were falling further than the overall market and put premiums were elevated enough to make put selling attractive.

Overall it was a decent return on the SPY PUT hedge but nothing spectacular. I ended up gaining $1174.00 after commission. 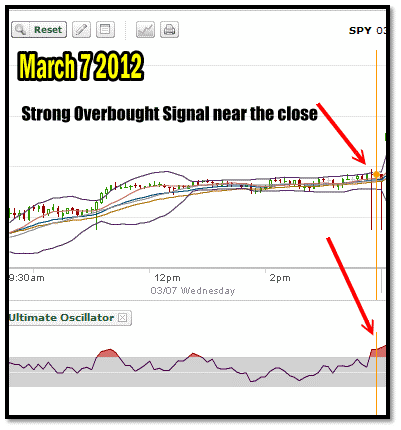 Today it became obvious to me as the day wore on that the rally was not going to die out. My market timing indicators kept rising throughout the day and the SPY PUT Hedge was obviously not going to be needed on March 8.

The SPY PUT Hedge is a short-term hedge. I rarely hold it for more than a few days. Last year many readers might recall I lost big on one trade when I held too long and ignored the market timing indicators that kept telling me to close the trade and get out. 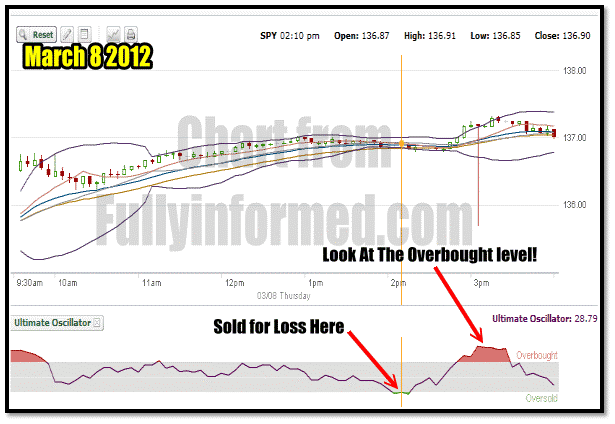 I decided today, with the market timing indicators climbing throughout the day that perhaps Tuesday’s sell-off was just a knee jerk reaction in an overbought market. It has happened before and will happen again. The selling on Tuesday though may have set the market up for another try to break through upper resistance in the S&P 500. I closed later in the afternoon at the first sign of an oversold market. My loss was $824.00. Over the two SPY PUT Trades I am still up but I was definitely surprised at the continuation of the rally today.

Of some interest to those who use the Ultimate Oscillator was the very high Overbought level right at the open and around 3:00 PM when the market tried to push even higher.

While I have my doubts that this market can push higher, the bulls are definitely in charge and there is a strong belief by many analysts that this stock market is cheap historically and should move higher. Personally I am glad to be doing put selling in this kind of market. I don’t buy into the “Cheap Stocks” philosophy that is being talked about incessantly by analysts. However I see no reason to hide either. My SPY PUT Hedge is exactly that, a hedge. It is a short-term trade to build up my cash cushion for those times when the market will turn down and I will be wrong and need some protection.

Last year the SPY PUT Hedge earned $75,631.00 which protected my entire USA Stock portfolio against a 12.5% decline. It was not needed for protection as my Put Selling Strategies last year did very well again. But the SPY PUT Hedge works in an environment where volatility is high and investors are panicked as they were from summer until the end of November last year.

I am sure my SPY PUT Hedge will be back this year, but these last two trades have told me to stop worrying about catching the top of the turn in this market as it may be stronger than I realize and any serious constant selling may be further away. (Anyone thinking May?)