Scotia Stock is believed by many analysts to be undervalued, but back in early December when the stock fell to $47.54 analysts indicated that Scotia stock was fully valued at $48.00 and was rated a hold by most analysts who follow Scotia Stock. This is part of the reason it is hard to follow analysts. Many are trend followers and others simple predict without knowledge of the fundamentals behind the stock. It is hard to be an analyst today when there is so much media time to fill. Select this Scotia Stock link to visit Bank Of Nova Scotia Investor Relations.

Scotia Stock  And The Case To Buy Now

Analysts who follow Scotia Stock are looking for the stock to return to above $60.00 which early in 2011 was the high before selling off with the rest of the stock markets.

I don’t believe in the BUY and HOLD strategy that analysts still recall from the early years of baby boomer investing. Instead with so many stocks having recovered from the market crashes of 2000 to 2003 and 2008 to 2009 and the 2010 one day wonder, I believe that it is important to guarantee yourself some growth of capital aside from the dividend while guarding against some loss in stock valuations.

Some investors prefer the married put strategy for stocks, which does hold merit. But in a stock like Scotia Stock which I would own in any bear market, I prefer a prudent approach which I call Mr Conservative which I have discussed in the past on my website. It is a strategy of staggering covered calls from out of the money to in the money and then keeping the earned capital aside for periods when Scotia Stock is lower affording me the opportunity to purchase more.

Based on this strategy, today (Feb 2) I bought 900 shares of Scotia Stock at $50.70 as the stock sold off from the news yesterday. Then I spread out my covered calls in the following staggered fashion.

$48.00 has marked a low period often in Scotia Stock in the past 6 years and many times has been a support level.

Therefore selecting these three strikes should give me the best potential to have some protection and at the same time earn the dividend, allow room to roll my covered calls further out in time, possibly earn a capital gain, watch the stock for signs of weakness to add to my position, earn the dividend and stay ahead of being exercised out of my shares. 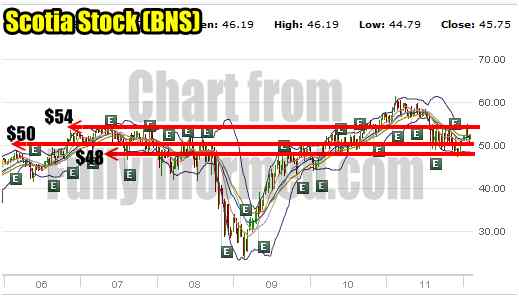 Feb 2 2012 – All figures include commission charges from TD Waterhouse

Note how every strike is above my break-even. Therefore if by chance something unforeseen should occur I have room to roll my covered call strikes lower and further out in time and still earn income.

At the outset of any trade using the Mr Conservative Covered Call Strategy the closest month is always the highest strike. In the case of Scotia Stock this is also because I bought it in February and spring often is the best months for stock markets. Therefore the chance of the stock reaching $54 is perhaps highest by April or May, which would allow me to be exercised from my stock at $54.00, capture a large capital gain and then hold the cash aside to take advantage of any weakness later in 2012 in Scotia Stock.

If exercised in April I will capture the March dividend which is .52 cents a share.

As this is a retirement account the goal of the account is to grow my capital rather than worry about monthly income.

As well should the stock rise but just make it to $55.00 by April its will provide wonderful covered call premiums at the $54 strike allowing me to roll the Scotia Stock from April out into 2013.

The summer tends to be among the poorer months which might provide the opportunity to buy back into Scotia Stock at a lower valuation.

If instead, the stock takes off and moves to $60.00, I have the option of buying back my April $54 covered calls and selling Scotia Stock covered calls beyond Jan 2013 at either the same strike ($54.00) or at the $56.00 which allows me to stay in Scotia Stock, earn the dividend and earn a higher capital gain. In my case however, if Scotia Stock should rise to $60 by April, I would choose to be exercised from the shares and wait for a pull-back in the stock before buying in again.

From the above explanation you can see that I already know my goals and what I will do depending on the outcome of the trade. The importance of having a plan in place before commencing the trade cannot be understated. You should always know what you will do with the trade before starting the trade. This removes emotion from the trade and makes it easy to make decisions as the trade unfolds.

Having a plan is essential to success in any trade. Having a long-term outlook on a stock does not mean that an investor should simply buy a stock or ETF and hope for the best. Investing in stocks, commodities, ETFs and a host of other products is highly risky.

Why any financial planner would tell a young person that they can afford losses because they are young and have so many years to recover is a ridiculous statement. It is when you are young that you want to have capital gains and protect yourself from large losses. When you are young your capital has the longest period to compound. Sustaining losses when you are young OR at any time makes no sense at all and impedes the compounding of your capital.

My Scotia Stock covered call trade provides the best of both investment objectives, to compound my capital while providing some protection against losses.