Put Selling And The 12% Goal

Put selling remains my favorite investment strategy. Over the past 4 decades, put selling has evolved into a very profitable means of compounding my capital, annually. When I started put selling in the mid 1970’s there were only a handful of stocks that had options available. Premiums were a lot higher in the mid 1970’s and over the years as more and more stocks had options introduced, option premiums have decreased except during periods of high volatility.

But with the maturing of the options market, there are today so many more stocks with options available and good option volumes on most, that it more than makes up for the decreased premiums through the wide variety of stocks available to select from.

A lot of readers email me with questions about my put selling strategy of trying to earn 1% a month or 12% annually. While most weeks I receive just one or two such emails, when the market is trending higher I receive a lot more. This is because as stock markets move higher it becomes more difficult to engage in put selling out of the money puts and still earn at least 1% a month.

If you read the article “My Strategy Explained” you’ll understand that I aim for about 1% a month in income. My goal is 12% of my entire stock portfolio a year of consistent income. But it is important to remember that some months it may be difficult on certain stocks to receive 1% in a month. The goal though is 12% annually and a year is a long time. There will be periods when earning 1% is difficult but there will also be lots of periods when I can earn more than 1% in a month. This is the trade-off when investing through put selling.

Put Selling And The 12% Goal

The 12% return is my goal in put selling because I have found through every single market, bull and bear I can consistently earn 12% and continue to compound my capital.

12% annual earnings on a $100,000 portfolio compounds to over $300,000 in just 10 years. In 20 years it will compound to over 1 million dollars. 12 percent is a terrific return if it can be done consistently while controlling risk.

Put Selling Is About Managing Risk

It is the 12% goal I care about with put selling. While it’s nice to earn 2% or more in a month when put selling, I know that overall the goal is 12% annually. That is what it will take to grow my capital according to my plan while managing risk. Not just risk of assignment, but risk of being assigned at overvalued prices which increases the likelihood of owning stock for long periods of time. If to earn 2% or more in a month I have to assume a higher risk of assignment it is necessary to be sure the stock is not overvalued.

Buy having monthly as well as an annual goal I can concentrate on either. When, as in the last two years, I reach my goal of 12% with months left in the year, I can pull back from riskier trades and sell for even half a percent because I have already reached by goal of 12%. Having clear objectives when put selling or trading stocks, controls emotion and the risk of stepping into a bad trade.

When Capital Has To Work Harder

Put selling at overvalued prices and having stock assigned means the capital tied to the shares will have a hard time assisting the overall portfolio in the goal of 1% a month and 12% annually. That means the remaining capital that is not yet assigned to shares has to work harder to make up for the capital that is now no longer performing. Often this can push an investor to take more risks when put selling and to stretch further into margin use. Overuse of margin with put selling can be an absolute nightmare particularly if the market pullback is more severe and additional shares are assigned, making it harder and harder to reach the 12% goal.

When stocks move higher, they often become overvalued. Forget what analysts jabber about. Analysts do not look at the overvaluation of stocks as a problem, but it often is for put selling. They look upon rising stocks as good for investors and a certain amount of rise in stocks is of course good, but often a stock that has run into overvalued territory will definitely collapse big when any kind of selling emerges. Put selling against overvalued stocks creates a higher risk of assignment at too high valuations. The higher the stock trends, many put sellers keep put selling until they get caught in the downturn which to them seems to have come out of nowhere. There are examples everywhere in any kind of stock market, bull or bear of put selling disasters on overvalued stocks.

Netflix stock is just one of many put selling disaster examples. Earlier this year Netflix stock traded over $200 and by July it had hit an intraday high of $300.70. It was highly overvalued and had a book value of just $7.40 and was trading at 68 X its PE. In less than two months it had fallen to below $130.00. I started receiving emails in early September from put selling investors caught in the collapse of Netflix. By the end of September I had received more than 1250 emails from put selling investors who had sold puts at strikes between $275.00 and $175.00. Many had been assigned shares which they did not want and many could not afford. One poor reader had 10 contracts assigned at $270.00 but the stock was trading at $155.00. 10 puts at $270.00 is $270,000.00 of capital.

Netflix was a stock heavily promoted by analysts and talked about endlessly on business media outlets. This is typical of analysts as they basically talk about the “stock of the month” like it was a new ice cream flavor brought to market. These talking heads know nothing about fundamentals, PE, book value and balance sheets let alone earnings projection. They know nothing about true value in a stock and certainly nothing about put selling. They are filling airtime.

Look at the Netflix Stock Put Option chart below for Jan 30 2012. Today three investors emailed to tell me that they had bought to close Jan 2013 $200 and $215 puts for staggering losses. They told me they had given up on Netflix Stock and were closing their put trades for huge losses. These are puts that were sold for $18.00 and $19.00 dollars of income when they sold the puts.  Such losses can sometimes take a lifetime to recover.

So why did these investors get caught? Because Netflix Stock was terribly overvalued and had been for over a year. But the constant chatter about the rise in Netflix Stock by Analysts and the lure of the enormous put premiums drew them into what became an emotion charged put selling trade. They forgot to manage risk.

At the very least as Netflix Stock rose, they might have considered a credit spread strategy of selling the higher put and buying a protective put. While they would still have had large losses, a credit spread would have assisted in limiting those losses. 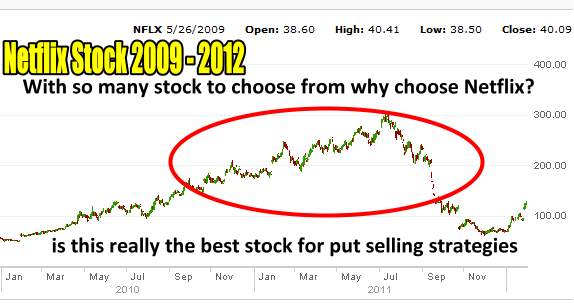 Netflix stock chart begs the question why would anyone choose put selling for this stock?

Another stock in 2011 that was flying high was First Solar stock. FSLR Stock was highly praised and promoted. At the start of 2011 the stock was flirting with $175.00. By late January it had started a plunge that took it all the way to $29.87 by December 2011. This is far below 2008 and 2009 stock market crashes and below it’s perceived book value of $46.61. I received a lot of emails throughout 2011 from put selling investors trapped in FSLR Stock Puts. This was a put selling disaster. Today I received an email from an investor who in January 2012 was assigned on 1000 FSLR put contracts at $120.00 which he has originally sold for $8.85. He wrote to tell me that he had originally been thrilled to sell the puts and then got stuck constantly rolling them until there was no point in rolling them further without substantial losses. His average cost for FSLR stock is $99.00. The stock closed today at $43.97. He also wrote to tell me he is finished with put selling and investing in stocks all together.

But if the same investor had not failed to manage risk but studied First Solar Stock prior to put selling he would have avoided such losses.

Forgetting about risk is a mistake many put selling investors make

Put Selling Is Not Free Money

Put selling is for too many investors considered free money. It is not. It is not even close. The risk when selling puts is enormous and it does not matter which stock the put selling strategy has been applied to.

Risk Is Risk When It Comes To Put Selling

With my strategy I have a list of large cap dividend paying stocks that I like for put selling. They each have long histories of recovering from market meltdowns. When they become overvalued I move away and look at other stocks within my stock list.  Should they fall and I cannot roll down or out, I would own them and begin selling covered calls. As well should the stock fall further than expected I have cash always available to either pick up shares at fire sale prices OR sell puts at lower strikes which moves my average cost of held shares even lower.

I keep 30% of my entire portfolio in cash to take advantage of pullbacks and crashes. With a stock market crash I only need to commit the cash part of my portfolio once every so many years to make huge gains which can then be averaged out for those years when my cash sits idle waiting for stock market sales.

Every stock I sell puts against I would buy more shares if they collapsed. Would investors do the same with Netflix Stock or First Solar Stock or hundreds of other stocks?

Put Selling Is Not A Race And It Is Not Gambling

My goal explained in my strategy is attainable and can be consistent if applied properly. Put selling is not a race and it certainly is not gambling. I do not believe that any option seller can consistently earn 12% a year in and out while controlling risk without having in place a solid put selling strategy and being highly selective in the stocks they sell options against.

So while many investors aim for that 2% or more every month I am content to establish a goal of 12% a year for my entire portfolio and wait for the opportunities to come to me.