Microsoft stock has had a bad rap for more than 10 years from investors. I read another article today where investors were saying they may as well have put their investment in a Bank Certificate earning 2.5% rather than Microsoft Stock. That is such a shame because Microsoft Stock has provided me with annual double-digit returns since 2000. It all comes down to thinking a little outside the box as it were. Instead of buying and hoping, if investors just used a few different strategies they could have earned excellent returns in Microsoft stock each year. What investors also do not realize is that a range bound stock such as Microsoft stock also often means limited risk to the downside.

Imagine earning annual double-digit gains and never worried about the downside risk in the stock. This type of stock is what I look for every day in the stock markets for put selling.

Put selling has been the principal method I have used to earn those returns on Microsoft stock. Most of the time put selling is straight forward as Microsoft stock stays in a nice trading range.

For example the Microsoft stock history chart below shows the period from March 2011 to March 2012. For most of that period the stock stayed in a range between $24 on the low side and $27.00 on the high. This made put selling easy. I simply stayed between $25 and $26 selling those put strikes throughout the year. Nothing could have been easier and premiums were decent for the entire year making the returns for 2011 easy and better than 20%. 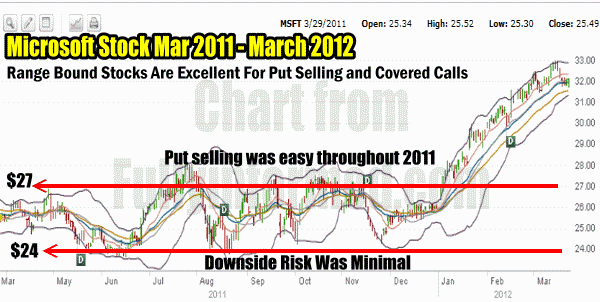 Put Selling In 2011 Was Easy In Microsoft Stock

2012 looks like it may turn out to be another great year. I believe strongly in staying with quality companies. I like to stay with companies that in the event of a market collapse can be counted on recovering back to their principal trading range once all the panic ends.

Microsoft Stock Is Easy To Buy In A Panic Sell-Off

In 2009 for example I bought shares below $16.00 in the panic. The only way I can pick up prices like these on this type of quality stock is by having confidence that Microsoft will withstand market gyrations and analyst downgrades and continue to bring in higher revenue and increased profits, which is exactly what Microsoft has been doing.

While many analysts are busy talking a storm over Apple Stock and the company I have been happily put selling against Microsoft stock which did not catch the attention of analysts until into late December 2011 when all of sudden they jumped on the Microsoft wagon and announced that it was “too cheap” and “terribly under-valued” which has brought the stock back into a rise.

This has happened many times over the past decade. For example throughout much of 2007 I was put selling Microsoft stock easily as it stayed in a very tight range and then in late October 2007 analysts jumped in again and sure enough Microsoft stock rose rapidly or as you can see in the chart below. 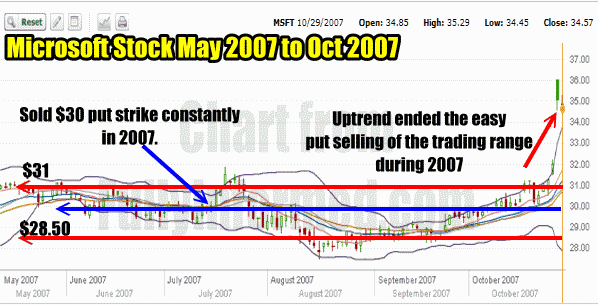 How To Trade The Rise In Microsoft Stock

So what do I do when Microsoft stock rises rapidly? Simple, I follow this stock higher through put selling in a ladder fashion following the stock higher.

This is not a put selling strategy I would use on a stock that I would NOT want to own. Once the excitement is over with Microsoft stock it could easily pull back to between $30 to $28. However until then I want to earn some very good put premiums on a terrific stock.

I was still holding 6 Jan 2012 $26 puts which had originally been from a put selling trade back in Dec 2009 when I sold 10 Naked Puts for Feb 2010 at the $30.00 put strike. By Feb 2010 Microsoft Stock had fallen below $27.00 and I began a rolling strategy of buying back my deep in the money puts and rolling them further out in time, sometimes down and always trying to reduce the number of put contracts with each roll. As explained in my recent article on Put Selling And Rolling To Control Assignment, I had rolled continuously without ever being assigned shares despite the drop in Microsoft Stock.

January 2012 And The Uptrend In Microsoft Stock

In January 2012 Microsoft stock commenced an uptrend and I have sold puts since January based on the MACD (Moving Average Convergence / Divergence) market timing technical tool and the Bollinger Band. 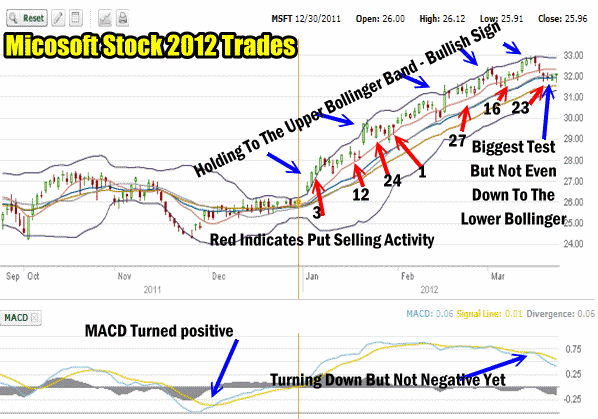 Recalling the article on Early Warning Tools To Spot A Collapsing Stock, these two market timing tools can be a very good timing method to determine when to stay in a stock for put selling and when to get out. I don’t plan on explaining how I used this strategy for Microsoft Stock as it is well covered in the article on Early Warning Tools. Suffice to say that when the Bollinger Band and MACD signal that the stock uptrend is ending, I will be closing my put positions.

Each successive put trades on Microsoft stock has been followed by checking the Bollinger Band and MACD for signs of a change in the uptrend. On weakness in particular I have sold naked puts since none of the pullbacks have flashed warnings in both MACD or the Bollinger Band. As long as MACD is not flashing a signal that the stock is going to fall, I will continue with this put selling strategy.

Here are the trades to date: (all figures are US Dollars and include commission charges). The dates are shown on the chart above.

While my return pales when compared to the more than 20% rise in Microsoft stock, I prefer the ease of put selling a rising stock like Microsoft stock versus buying and holding the stock. While it is easy now to look back and reflect that buying the stock was the better choice, I have been able to enjoy both the rise in the stock through my retirement account where I am holding shares bought Jan 3 and in my USA Stock Portfolio where I have done my put selling trades.

It is important to realize that put selling is a strategy of small gains which when earned consistently compound to larger gains. However once a put is sold, my profit for that trade is locked in. With a stock once it is bought, if an uptrend continues I should always be able to earn larger profits trading stock than selling a put at the money or slightly out of the money. However a stock that is rangebound will consistently provide excellent put selling returns.

I am continuing to sell puts on Microsoft Stock and unless some unforeseen event occurs (think Iran or Italy, Ireland, Spain) I believe Microsoft Stock will continue to rise in the present market exuberance. I will be put selling all the way up and closing early when possible.  By closing early I am releasing my capital for further put selling and locking in my profit earned.

Through using this strategy of following the rise in Microsoft stock and closing early I expect that when a downturn does come I can easily close my put trades at that point and if there is a loss it will be minor in comparison to the returns I will have made in my put selling trades of Microsoft Stock.