Sometimes investors can look at the global economic community and without using market timing indicators, know that the situation is becoming worse. With the Thanksgiving weekend in the United States and the week shortened, a lot of investors can take a breather from watching the tumultuous markets. Over the past few days I have received a number of emails complimenting me on a number of good market timing calls on the market direction. While I appreciate the market timing and market direction compliments, it’s not really all that hard to predict presently, since Europe is the dominating factor and back earlier in the year I had written an article called Dance Near The Exit which basically pinpointed that come June, the market would be in trouble.

All that has come to pass. However the European Debt Crisis is much more serious than even my article on the Greek Debt Crisis predicted. At that time though my Greek friends had advised that they were out of the Euro, held no European Stocks or bonds of any European Country and were basically holding US Dollars and Treasuries. They were buying US bills at a time when all the analysts including PIMCO were warning people to dump their US paper. This market timing link will take you to an article explaining the Greek Debt Crisis.

It just goes to show you that the smartest investors out there know no more than you or I. My Greek friends are laughing now with their investments up over 20%. I spoke with them this holiday weekend and they told me it was an easy guess. After all they live in Greece so they knew what had gone on for years.

But back to the Thanksgiving outlook for a shortened Friday and then into the last week of November and first week of December. Could there be a rally in the works? My market timing indicators on Wednesday indicated more selling to come and market direction still down. Therefore if there is a rally I will be buying back any naked puts that are worth purchasing and then getting ready to sell them again. Fun isn’t it.

This is exactly what the Cautious Bull strategy is all about. Close early in strength and do put selling in weakness. A simple formula that works for me but again, I only sell puts on stocks I would own if assigned. I think that’s an important distinction in this troubled market and here’s why.

As many readers know I lean heavily on MACD (Moving Average Convergence / Divergence) technical indicator for market timing guidance. In the chart below I have focused on the past 6 trading sessions. Each session has seen MACD become more negative which as a market timing tool informs me that the market direction is lower still. On Wednesday MACD widened to negative -11.78. Six trading sessions earlier MACD was at negative -3.39. This is an increase of 247%. 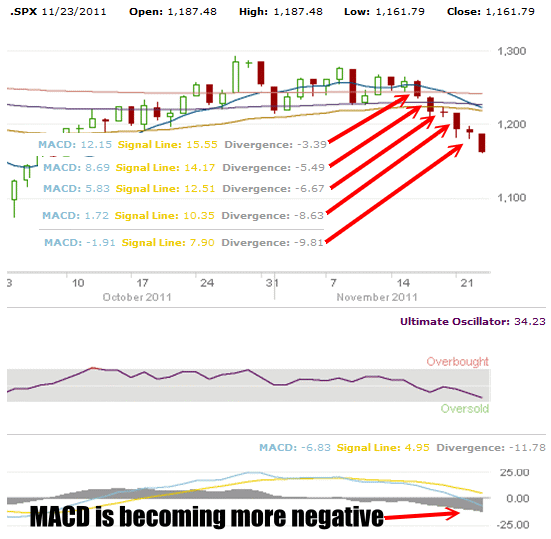 MACD As A Market Timing Indicator

MACD is warning that the market is reaching a precipice. With European leaders appearing to be ready to do nothing more, it would seem that they are considering dropping the Euro. The German Bond Auction as everyone knows, did not go well proving that investors are losing their appetite for risk in Europe. After all the concept of buying bonds is supposed to be that they are less risky than equities. Portugal has now had Fitch lower its credit rating to junk bond status.

Market Timing and The US Dollar

The never-ending parade of bad news out of Europe has pushed the US Dollar up which is the primary reason Gold is backing off. However any positive news could push the US Dollar lower and this could help stocks immensely.

MACD is warning that unless something positive happens very soon, the markets could be revisiting the Oct 4 lows in quick order. My market timing indicators include the Ultimate Oscillator which is showing an oversold condition in the S&P. However, oversold conditions can last for some time in markets that are under pressure, so whether or not the oversold market timing indicator will result in a relief bounce is difficult to judge.

If there is relief bounce then it should be used to buy back sold puts and prepare for the next market direction downturn. The stock markets are sitting on a cliff and with Europe seemingly prepared to watch it go over, it is time to raise cash. Cash will afford us the opportunity to pick up stocks on the cheap to unload them in the next upturn which, if it does not happen soon, will probably mean no rally until 2012.

If the rally is stalled until 2012, then it will probably be from much lower prices. I have said many times that market timing is not a science, but once in a while seasoned investors truly don’t need market timing indicators to tell them the markets are perched precariously on the edge.