Last week there wasn’t a lot to write about as far as market timing and market direction were concerned. I closed my spy put trade on Thursday in what was a slow week of the S&P 500 grinding higher most days with the dip on Thursday which was quickly bought. Market timing indicators remain positive but show the signs of stress in the market as overbought conditions remain.

While market timing indicators cannot always pinpoint when a rally will end, there are enough warnings signs now that any day we could see selling start in stocks and the stock market direction turn down. With the closure of my SPY PUT trade I basically ended up with a $110.00 gain.

But as explained before, the SPY PUT is a hedge against losses for market declines and not a day or swing trade to try to generate a quick profit. When I placed the spy put into play on Feb 15 it was because I could see the extreme signals in the market and I felt there was a good chance the market would pullback anywhere from 3% to 5%. By using the SPY PUT hedge I would be able to start building up my cash cushion which I explain in my spy put hedge strategy articles, is how I protect my overall portfolio.

Presently though the better strategy for me is to wait for the market to give a clear break and then determine if there is just going to be a dip which will be a put selling opportunity rather than anything to worry about. If the dip seems more like a pullback then it will be prudent to use the SPY PUT hedge again.

On Dec 23 2011 the 10 day Simple Moving Average crossed the 20 day Exponential Moving Average and a few days later the 30 dat EMA as well. Since then it has been clear sailing for the S&P 500 as market direction has remained up almost entirely throughout this period.

The index has pushed all my market timing indicators into positive territory and kept most of them there. Since Dec 23 the market is up 8% with not much stopping along the way and certainly no serious test to find support.

If there is a decline to test for support, look to the lower Bollinger Band which is around 1300. This would mark a 5% decline in the overall market and test to see if there is enough support to push market direction back up. 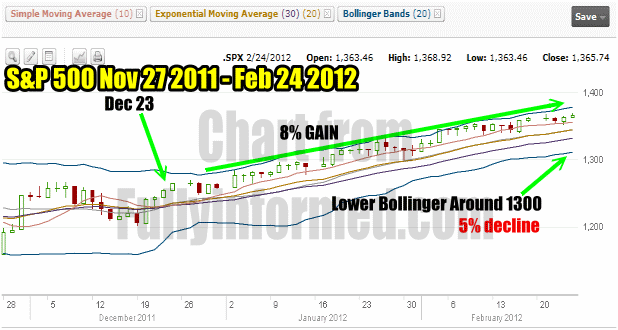 The Market Timing indicators for Feb 24 are still positive but as the above chart shows there has not really been a test of support since Dec 23 2011.

All the market timing indicators are showing the market stalled and in most cases still overbought.

Momentum is definitely stalling but for the most part still positive.

MACD (Moving Average Convergence / Divergence) is negative again today and has been for a few days. This could be the clue I am looking for. I need though one more market timing indicator to confirm MACD and then I know the market direction is going to change.

The Ultimate Oscillator is not as heavily overbought as previous but still flashing overbought indicators.

Rate of Change market timing indicator is actually higher than yesterday but “just” a bit higher.

The Slow Stochastic is lower than the previous few days which would indicate the overbought condition is decreasing.

The Fast Stochastic is not as extremely overbought but it is still generally overbought and again is warning that the market should pullback from here before it can advance again. 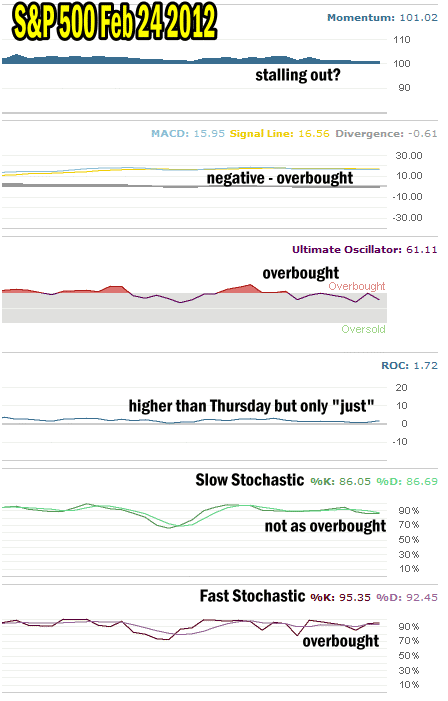 Market Timing / Market Direction Summary For The Week Ahead

The S&P 500 is now at its highest level since before the collapse of Lehman Brothers in 2008. With so much bullishness you would think the market would have already pulled back. If the market can punch through 1370 and hold above that level for a few days, fresh buying may emerge as 1370 was the 2011 intraday high.

There is strong resistance at 1370 which is part of the reason the market timing indicators are sitting where they are. While a decline of 5% is I believe likely, there is still the chance the S&P 500 could break 1370 and then start a new leg to the recent bull market.

The NASDAQ is now at its highest level since mid-December 2000 and the Dow Jones added another 0.3% as it races ahead of the S&P 500 in recovering the ground lost in the last bear market.

Bull markets are strange beasts. They can stay in an oversold fashion for weeks longer than any market timing technicals can support. They also can overshoot and bring many investors back “into the game” as it were when the market is on the high side. Don’t forget that the majority of retail investors tend to buy near the top of a market and not the bottom.

The US dollar has declined this past week which has helped stocks and some commodities, however OIL may be the key to unraveling the market direction. If oil continues its advance it will pressure stocks and consumer confidence will turn down with rising gasoline prices. A rise higher in oil will also slow the economy and if the stock markets pull back, the US Dollar should rally pressuring stocks further.

What I Am Doing Now

Right now I have no SPY PUT Hedge in place. I am staying very selective in the puts I sell and doing the dip game, namely selling puts on my favorite stocks on any weakness in the stock. My cautious bull strategy has worked well since January 2011. I see no reason to change now.

For investors doing covered calls, they may want to wait a little longer this week to see if the S&P 500 can punch a hole through resistance at 1370 before selling covered calls. Selling covered calls now when the market timing indicators are indecisive could mean being exercised out of shares in the event the stock markets decide to start a new leg up.

I believe the market timing indicators are predicting that the stock market is stalled and needs to pullback to regroup, retest support and then move higher and break the 1370 resistance. I believe this market will try to do that as we enter Spring. The key could be the price of oil.