Friday’s dramatic pull back in stocks still has all the makings of an overreaction to both the upturn in stocks on Wednesday following the Fed’s comments and to Friday’s downturn following comments from Fed President Bullard that to some degree were taken out of context by media and investors alike. Nonetheless the market direction remains weak today and what we are now seeing is the market deciding whether it will hold support at the 1700 level.

The 3 month chart for the S&P market direction is below. I have discussed the importance of the 1700 level at various times over the past week and back in late July and early August. You can see in the chart below why 1700 is key. Commencing in mid July the 1700 level was heavy resistance to the market pushing any higher. The 1700 level was finally broken through at the start of August but only for a very brief 3 trading days before the market fell back. After attempting to break through again, the market weakened under the Syrian issue and the continued worried about the tapering of Quantitative Easing.

The latest market direction rally pushed the S&P 500 back above 1700 but primarily due to the Fed’s announcement last Wednesday of delaying tapering. Since then the pull back has continued in stocks as the S&P is continuing to push back to 1700. This is important because there is very little support for the market at the 1700 level. The next support is at 1680 and then support moves considerably lower. If 1700 breaks I will be putting on Spy Put Options and changing the market direction portfolio from its present neutral stance to down. 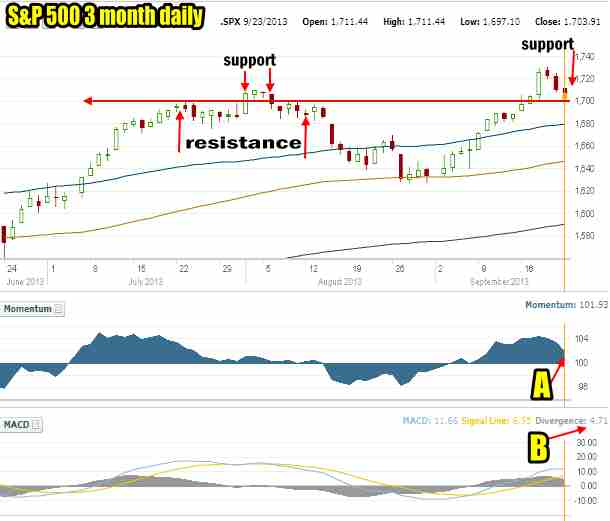 What are the odds the 1700 valuation will break. Probably better than 60%.

In the chart above you can that momentum is beginning to fall off. It will take more than today to drop momentum back and even turn it negative but intraday momentum is looking very weak.

The only real bright point in the market direction hanging onto the 1700 level is MACD (Moving Average Convergence / Divergence) which at present intraday is a bullish 4.71 which is not much of a drop from the close on Friday. MACD is a very good technical indicator to consider using for judging buy and sell signals. FullyInformed Members are able to study this article which looks at the present market using the same two indicators above.

Here is today’s intraday chart around 2:00 PM. You can see the weakness in the morning pushed the S&P to below 1700. The S&P recovered the momentum back up but you can see the definite weakness. Overall the S&P probably really needs to hold 1702 to give the market enough time to “catch its breath”, draw in investors and push back higher. The problem on the upside is the S&P and Dow both must recover their most recent highs from Wednesday and that actually might be harder to do. This will be an interesting week.

No Need To Rush Into Trades

There is no need to rush into positions at this point. There are always opportunities every day and it is always best to stack the odds of success if your favor. That means waiting for the clear signal and taking advantage of it when it comes. Right now for the market direction we want that clear signal that 1700 will not hold and then we know what the next step in our trades should be.

Until then closing naked put positions that have good profits is a great choice. Why risk assigned and tie up capital if indeed the market direction does change to down. If that happens there will be lots of opportunity to move to naked calls or buy puts or a myriad of other strategies. On the other hand if stocks manage to hold here and move higher there are always opportunities to put in place further Put Selling positions so when you have the chance to take profits and the market direction looks “dicey” which it does right now, consider the profits you have made.