The recent news about Johnson and Johnson having to pay fines of over 1 billion dollars over the drug Risperdal hit Johnson and Johnson Share Price pushing it lower. I keep a watch list all the time on my computer and I have alerts set within my discount broker which warn me when my “best friend” might be in trouble. Sure enough I received an alert 4 days ago as the stock began to tumble. I checked out a JNJ Quote each day and found that the price was sliding below $65.00. I am already holding puts on Johnson and Johnson stock at $62.50 which I sold for .50 cents late in March 2012.

Johnson and Johnson Stock and the Ultimate Oscillator

The chart below shows the Ultimate Oscillator Buy and Sell signals which I use to buy and sell shares of the stock. As well every time the stock pulls back I have sold the $62.50 puts. The put selling combined with buying and selling JNJ Stock has made for an excellent return to date.

Usually when I am buying stock I also sell the $62.50 puts for the next one or two months out. 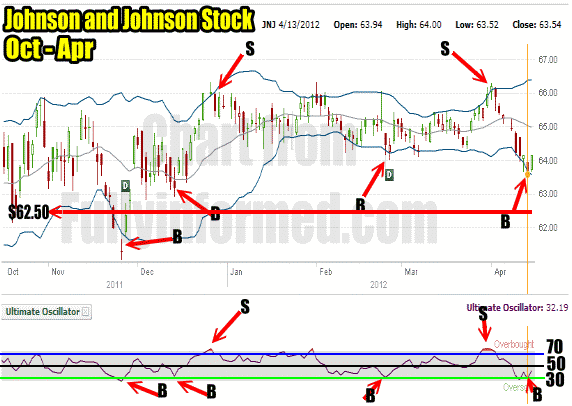 To understand more about how the ultimate oscillator works you may want to read my article Market Timing System Using The Ultimate Oscillator. In the article I explain what the Ultimate Oscillator is, who invented it, how it works, why i consider it superior to other oscillators and how I trade based on the ultimate oscillator. It is a terrific tool for both buying and selling stock as well as put selling and covered calls.

For put selling, when the Ultimate Oscillator falls below 30 I look to sell puts on the underlying stock. This is because in many instances when the ultimate oscillator gives the oversold signal (which is below 30), the stock often has hit a bottom and may wander sideways or bounce back up. I find it a perfect time to consider selling puts.

A) The first strategy is to sell out of the money covered calls as I believe the stock will not move much higher and I do not want to be exercised from the stock. Simply, I want to sell covered calls to generate additional income while the stock has run-up and pushed covered calls premiums higher. BUT I DO NOT WANT TO GIVE UP MY STOCK.

B) The second strategy is to sell in the money covered calls after the stock has hit an overbought indicator (which is above 70). I do this on stocks that I would like to be exercised out of, but I want more premium than the stock would earn if I sold it just now. Let’s use this fictious example. I bought a stock at $60.00 and it has run up to $70.00. I could sell it now for a gain or $10.00 or I could sell a $67.50 covered call 1 month away for $3.75, which if exercised out of the stock would mean I have earned $11.25 or 2% more. If the stock falls back below $67.50 I get to keep my shares and I have earned $3.75 or 6.25% ($3.75 / $60) and end up still holding the shares. When this happens I then wait for another oversold signal from the ultimate oscillator and then sell in the money covered calls again.

It is important to realize that stocks move around a lot even Johnson and Johnson stock. This creates enormous opportunities to earn decent profits through simple strategies such as in the money covered calls or put selling.

You can see from the Johnson and Johnson Stock chart above that this slow, boring stock actually moves around a lot. But with Johnson and Johnson stock I do not worry if it falls. This is a solid dividend paying huge corporation. In 2008 when the stock fell below $46.00 I bought a lot of stock. I picked it up in small amounts a little at a time. Then when the stock recovered back to $57.50 I unloaded it and went back to put selling. Here are some of my other trades from the market collapse in 2009.

Taking Opportunities When They Arrive in Johnson and Johnson Stock

Stocks move around. They go up and down. The key to consistently growing your capital is realizing that through market timing technical tools like the Ultimate Oscillator, you can assist your capital by not buying when the stock is up, but instead buying it when it is oversold. Then sell it when it is overbought.

Today then I bought 1000 shares of Johnson and Johnson stock for what I believe will be a quick bounce. I may sell as early as Monday, but I will wait to see what Monday will bring.