Europe Crisis – Greek Bond Haircut Is A Default In Every Sense

Breadcrumbs: Home » Just My Opinion » Europe Crisis – Greek Bond Haircut Is A Default In Every Sense

The Europe Crisis I believe continues unabated. The Greek restructuring of debt and subsequent second bailout I felt was probably 90% assured because no European Bureaucrat actually has any answer to the Europe Crisis.  This Greek Bond Haircut it is a default in every sense of the word.

The dictionary defines default as: Noun: Failure to fulfill an obligation, esp. to repay a loan.

Verb: Fail to fulfill an obligation such as to repay a loan.

Europe Crisis Is A Question Of What Might Hurt Less

The Bureaucrats who run Europe seemed to feel that a Greek bankruptcy would hurt more than a haircut for debt holders. What they fail to see is that Greece has defaulted either way on its debt and there still is no real plan to end the Europe Crisis. If anything, it is getting wider and with the Greek default on debt, it is being allowed to engulf more nations. 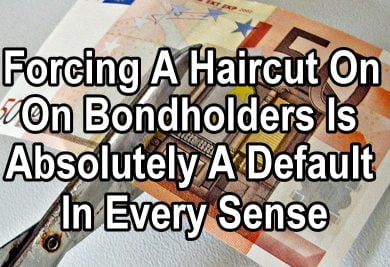 Safest Investment In The World

They are supposed to get their money back.

It is incredibly disturbing to think that there is a belief among European Leaders that they are serving their citizens better by forcing investors, whether they be individuals or institutions to take stunning losses on sovereign debt.

From what I have read the debt of most European nations is held by other European nations and possibly that is the saving grace of the entire Europe Crisis.  Perhaps the belief is that by forgiving debt it basically will mean nations that hold the debt will be the real losers and not the average citizens although how this can be when nations are basically supported through taxpayers, I fail to see.

This Is Sovereign Debt

Imagine the United States doing this. Is it any longer unfathomable?

Europe is not a nation, but a collective band of many nations with different needs, wants and GDPs. Europe has professional politicians and bureaucrats who are highly overpaid, many not elected and are accountable to no one.

This kind of power is unthinkable in North America. In North America we complain bitterly about our so-called highly paid political leaders and senior servants, but their remuneration and level of power pales in comparison to European Bureaucrats who have made entire careers of being richly rewarded, secretive and unaccountable.

How Is This Benefiting Anyone Including Greece

Why Greek debt was allowed to mushroom out of control is a question that really needs to be asked of the European Bureaucrats.

Everyone knew Greece was in trouble before they joined the EU.  Perhaps the better question is why was Greece allowed to join in the first place?

Not Living In Europe

In an article I wrote on the Europe Crisis back in June 2011, I commented how my Greek investor friends were completely out of Greek and indeed European bonds, securities and even currency. Everything they held was in US bonds, treasuries and currency. They told me how shocked they were about the mess Greece and Europe was in and how saving Greece which they all felt would be done at enormous cost, would in the end prove a serious mistake. They explained several times to me that not living in Europe I could not comprehend the attitude of the bureaucrats who run Europe.

By restructuring debt there is no doubt that Greece has defaulted. It doesn’t matter what term is used to try to make this palatable. An unbelievable loss will be suffered by bond, debt holders and by the looks of it, taxpayers, to the tune of billions of Euros. The Europe Crisis is being so poorly handled that as an investor I have no recourse but to stay completely away from all European assets of every kind.

Europe Crisis Is About Derivatives

I do not believe for a minute that the real concern of the EU Bureaucrats was Greece. Their real concern is that no one including them, knows the ramifications of allowing Greece to go bankrupt because that may or may not affect a world of derivatives that as Warren Buffett has commented several times, no one understands let alone can explain.

Following the second bailout and Greek default on its debt, Fitch downgraded Greek debt to junk status. Basically they are saying this latest bailout changes nothing in regards to the Greece and the Europe Crisis. It is not surprising. Perhaps what is surprising is that it took this long for the downgrade to junk status.

How Can Forgiving Debt Fix The Europe Crisis

The pumping in of more debt after forgiving debt is laughable at best. The debt owed by European countries is so out of control most investors cannot comprehend it. The strategy that forgiving debt and then piling on more debt to pay interest on debt can work, is so hair brain that I am amazed European citizens are not protesting against the bureaucrats who came up with the concept in the first place. It is probably because they have no idea what in the world is going on, either.

As an investor I hold sovereign debt of Canada and the United States. I would be furious to end up being told, not asked, that a haircut is going to have to be taken. The money I put into sovereign debt did not come out of thin air and because I live in a democratic capitalist society, it shouldn’t  be allowed to disappear into thin air.

End Of Europe Crisis Is A Long Way Off

As an investor I would like to see an end to the Europe Crisis and a resumption of what is truly important, jobs for people, growth, opportunity and how about sanity.

Wouldn’t a return to sanity be nice. How about a return to where banks do what a bank should do. Loans, mortgages and financial planning not derivatives. How about the sanity of banks holding proper liquidity.

How about the sanity of knowing that nations can only borrow what their GDP can actually handle.

How about an end to the insanity of a “bank” (and I use that term loosely) not loaning out 20 dollars for every 1 dollar that it takes in, all in the name of profits for shareholders and Bank Bureaucrats.

I don’t see this as an end to the Europe Crisis but just a moment when the EU Bureaucrats can probably take a break to the French Riviera. Perhaps paddle in the water and drink expensive French Wine.

If the Europe Crisis plan now is to forgive debt and then pile back on more debt to repay interest on debt, then I am sure there will be a line-up of nations outside the European Central Bank’s front door.

In the same scenario the recent rise of the Dow, NASDAQ and S&P 500 has to be suspect and as such I believe the prudent thing for most investors is to have at least some money in bear market funds, for, well you know, just in case.