You just have to tip your hat to Mr. Bernanke. On one hand we have the fiscal cliff issue which if not resolved could see some damaging results to the economy of the US. Those results would be far-reaching and definitely impact more than the US. This is what the Republicans find so difficult. They are between a rock and a hard place. No matter how they try to sell it, if the fiscal cliff issue fails to be resolved they will be held accountable by most Americans. Yet a lot of what the Republicans are arguing for makes sense. Spending cuts, fair taxation, fiscal responsibility all make sense. But both the Democrats and Republicans are to blame for the mess the economy and government are in after years of irresponsible spending. On the other hand unemployment is stubbornly high, growth anemic and housing looks like is just might be ready to turn the corner.

I have always been a big believer in a consumption tax without any loopholes. You buy something you pay the tax. To me that makes a lot of sense. In Canada we have a value added tax. By and large its pretty fair. If I spend more than someone who spends less, I pay more tax. I have friends who have a lot more money than I and when I buy a nice new LCD TV it is a 40 inch. When they buy, it is a 3D 60 inch and the other day I was at a friend who bought a 70 inch LCD which set them back $5000. But they have the money and they can pay the tax. So a flat consumption tax I think makes perfect sense. But I am just an investor and I am getting off track. I’m interested in what readers think so tell me your take on taxation below in the comments section.

Getting back on track, Mr Bernanke’s move today to tie in the Bond-Buying program to the unemployment rate and inflation rate is a good move for investors. Now instead of a mid-2015 deadline we can actually get some idea as to when to expect the gravy train to slow down. All we have to do is watch unemployment and the inflation rate. Nice move Mr. Bernanke. This man is definitely friendly to stock and option investors. This has to be the longest running party I have ever attended. If my mentor were alive today he would be amazed. My mentor went through the 1920’s and 1930’s and he told me repeated that the next financial crisis, he hoped governments would open the liquidity floodgates rather than tighten them up.

So while the fiscal cliff issue reigns, Mr Bernanke has given support to the markets and the economy which could assist in a “just in case” scenario. Now add in yesterday’s market direction breakout and you have all the workings for the market direction to push back and beyond the highs for this year. Once again thank you for an early Christmas Present!

The World Needs The Stock Markets

Mr Bernanke certainly seems to understand the importance of the stock market. While the bond market dwarfs the stock market, stocks still are what everyone sees. When stocks move higher people feel good even if they are not investing in stocks. Pension plans are tied to stocks and with stocks continuing to stay positive Bernanke knows that companies can continue to issue bonds and grow and that’s the big connection between stocks and bonds. Just recently Intel issued a huge bond offering for up to 30 years. A number of Canadian Banks have also recently issued bond offerings at historic low rates.  We may never see these low-interest rates again in our lifetimes but by the Federal Reserve continuing the Bond-buying program they are pushing rates lower and this appears to be having the desired effect on assisting a housing recovery. The bond market may be in the throes of the biggest bond bubble in history but until interest rates climb, that bond bubble will take time to burst and who knows, when the bond bubble finally does break it may not have the same repercussions as a stock market bubble. 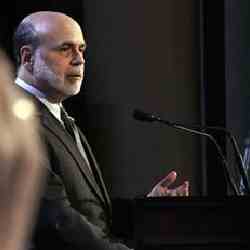 The Fed Chairman has once again assisted in putting a floor under the stock market through continuing to seek lower unemployment, lower real interest rates and boost housing. This doesn’t mean we won’t see stock market selling. That’s just a natural part of the stock market, but a market direction decline of magnitude at present I believe is still in check. If the fiscal cliff is not resolved, this move by Bernanke is sure to help in any stock market decline and that may be all it takes should the politicians continue to stay uncompromising. So thank you Mr Bernanke and a very Merry Christmas to you. I will be keeping my capital in stocks and I really should send him a Christmas Card.

If you have a comment, disagree with me or just want to say hi, post it below. I’d love to hear what you think of the Fed Chairman’s announcement today.