My Spy Put trade remains for me the very best hedge against market downturns. It is important to remember that I have confidence that the market has returned to a bear bias and could stay that way for some time. Because of this I think the Spy Put Options are the best way to hedge market turmoil.

As well market volatility during periods of uncertainty makes S&P put options such as the Spy put a terrific play.

Since the market was in an upswing the past few days, the spy options have experienced a change in premium with the call options increasing in premium and the put options falling. My Spy Put hedge has worked incredibly well for almost a decade now. The past two years of my spy put trades are on my website.

Here is a quick review of the S&P put hedge I use: The past two years trades can be followed by selecting the link in the appropriate year.

Therefore to hedge using the S&P Put, my portfolio was protected throughout the year at an average cost of $7750.00 annually. This means my S&P Put hedge to Sep 2 is using just 1.25% of my total portfolio and has returned 9.1% so far. Pretty cheap insurance indeed. With a return of 9.1% my entire portfolio could fall 9% and I would still break even for the year. This is what a S&P Put hedge should do. Provide cheap insurance and cover at least 10% of a decline.

Therefore to hedge with an S&P Put my portfolio was protected throughout the year at an average cost of $8250.00 annually. This means my S&P Put hedge cost 1.65% of my total portfolio and returned 13.08% to the end of 2010. Again cheap insurance. My entire portfolio of $500,000 could have fallen 13% and once again I wo0uld have broke even.

However the great thing about using options is that while the SPY Put hedge is protecting my portfolio, the various stock puts and covered calls I have sold are also generating additional income, which offers further downside protection.

Another solution that many investors use is buying puts on each of their stock holdings. While this is insurance of a kind, most investors will not pay the price of buying at the money puts because in periods of high volatility at the money puts on individual stocks are very high, which eats into the profit of holding the stock.

Therefore many investors hold out of the money puts against their stocks which means for many stocks there is a decline already built in before the put offers any real protection.

Let’s look at this example from Sept 2 2011 on AT&T Stock. With the stock at 28.36 if an investor wanted to protect their position at the money today, it would cost 3.8%. 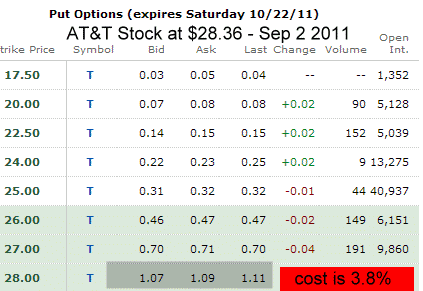 An investor could consider selling an out of the money covered call to try to cover some of the cost of the $28 put. Below are the call options available with the stock at $28.36. You can see that premiums would only cover some of the at the money put protection. 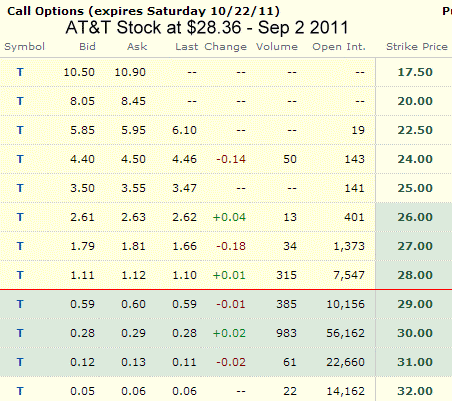 Even by going all the way out to January an investor would have a hard time gaining enough on the call side to pay for the at the money put option as you can see from the January call options chart below. Imagine doing this strategy on each and every stock in a portfolio. 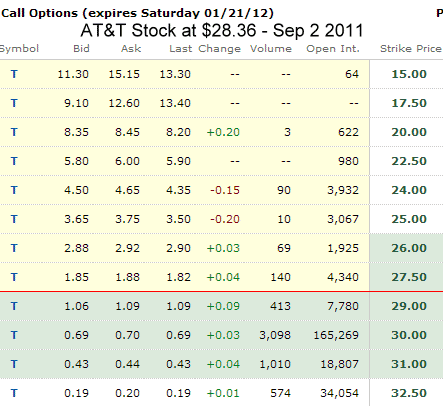 This is why I believe the Spy Put Hedge is the most effective  and cheapest insurance for my portfolio. The hedge is a true S&P Put hedge. Meanwhile all I have to purchase is a handful of spy put options whenever the market appears weak, through using my hedging strategy tools. You can read how I use these tools here:

This article explains what I call the short version in which I use the ultimate oscillator as the primary tool.

This article explains how I trade my spy put options when I am in front of my computer watching the S&P throughout the day.

The last article explains how I trade my sput put options when I am unable to be in front of the computer throughout the day. I therefore put in place my buy points and sell points after trading hours.

The problem with selling puts and selling covered calls is that they provide only a small amount of protection in a market decline. If I earn 2% on a covered call or sold put, this provides just 2% protection against a decline AND in JUST THE ONE STOCK. An overall market decline can impact dramatically my portfolio.

However the SPY Put hedge picks up where the covered call or simple stock sold put, leaves off. The S&P Put is perhaps the most important aspect of investing in today’s highly volatile market.

By having a put on the entire S&P, my whole portfolio benefits in a market decline. It not only earns income, but has additional downside protection on a much larger scale than holding individual puts on each stock I am trading.

The spy put performance review shows that my spy put hedge not only functions properly, but does in fact, hedge my entire portfolio against the severity of market corrections and declines.

To be without protection in today’s volatile markets is a mistake. I believe every investor should consider something similar to the spy put hedge in their own portfolios.