Since the decline in Intel Stock I have received many emails asking for ideas on Intel Stock positions. Many are seeking to get out of the stock all together and others would like to stay but want to reduce their exposure. Intel Stock is a widely held stock among institutional and retail investors. There are millions of investors and most are not happy with the present decline.

One investor, John, wrote to me asking for help is getting some capital out of Intel Stock as he felt that he had too much capital at risk. His case is similar to a number of other investors who have emailed me so I put together this strategy article to assist them.

Here is his email explaining his situation. I have edited his comment for the purpose of this article.

Teddi I am presently holding 1000 shares of Intel Stock assigned at $25.00 and covered call premiums are terrible. I am also holding 10 naked put contracts at $21.00 for January and 10 at $20 also for January. I don’t mind holding Intel Stock for a few years but I am nervous about the future growth potential and I think I overdid the number of naked puts I am now holding. I want to get out some of the capital I have in this trade. Got any ideas? Also I do not want to put more capital in this trade and would like to not take any losses. John

I will tackle the Put Selling in this article since John seems happier holding the shares and less so about the 20 naked put contracts. John is nervous about this trade which is never a good thing. It is important to understand that when stocks go on sale investors are always nervous. This is why so few investors buy stocks in a market panic. I know, I know. You have heard from your friends or investing buddies how they bought Citigroup in the great bear of 2008-09 for $1.00 or Intel Stock for $12.50. But honestly if all these investors were busy buying in the panic, why did stocks just keep collapsing? Even in my local investing group I have a lot of long-term investor friends who pulled out and absolutely refused to buy in the collapse. So don’t worry, you are not alone being nervous about a big decline. 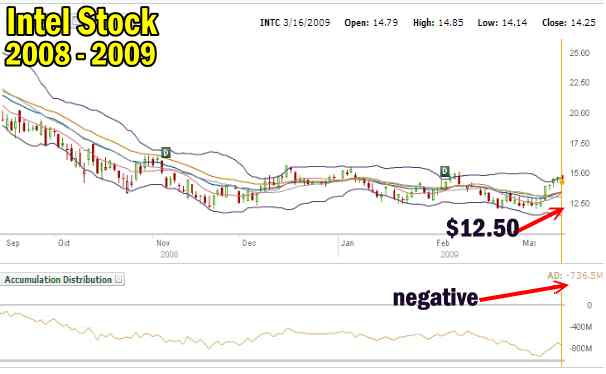 The accumulation - distribution technical indicator shows that the majority of investors were dumping Intel Stock during the bear market panic of 2008 to 2009.

The problem though is to get a real bargain on a stock means you have to be buying when others are scared and that’s tough to do. Intel at $19.00 in my opinion is undervalued. I thought anywhere above $26 it was overvalued. My put selling range from $26 all the way down to $16.00. I think Intel Stock is a great buy, but investors are a nervous bunch and rightly so. Therefore what John needs is to put together a strategy that can help him sleep nights and that means reduce these naked puts which will reduce the capital at risk.

John needs to think a bit differently about Put Selling Intel Stock. All figures in this article are without commissions. Remember that these are ideas only and are not financial advice or recommendations. You always trade at your own risk. Read the terms of use.

To cover the net debit of $193 I would use the earning potential of the remaining puts presently held at the January $20 put strike. This is step 2.

The second step encompasses the January $20 naked puts. I would use these puts as my money-maker to help to reduce the number of naked puts that are exposed to possible capital loss. If by January 2013 Intel Stock rises above $20.00 then these naked puts will expire out of the money. I would then sell just 5 naked puts and stay out two months and down a minimum of two strikes. For example in January if Intel stock was at $20.50 by expiry, I would sell the March $18. It would probably earn about .23 cents. With just 5 naked puts being sold this would reduce the capital at risk in Intel Stock by $10,000.00. Two months of Put Selling for 5 contracts would earn more than the net debit of $193.00 and put the entire put rolling and reducing exercise back into the black. Add to that the dividend which should next be paid around Feb 5 and I will be further into the black with this trade.

The third step would have to be used if my January $20 strike naked puts end up in the money.

A) If Intel Stock closes at $19.50 or lower I will accept assignment on the 10 naked put contracts at $20.00. I would immediately sell IN THE MONEY Covered Calls to get out of the stock. I would probably sell the $18 covered calls out to Feb or March. The month would depend on whichever allowed me to at least break-even on the assigned shares. I want to be exercised out of the stock. As soon as I am exercised out of the stock I can then reduce the number of put contracts in half and free up $10,000 in capital from this trade.

B) If Intel Stock closed in January between $19.50 to $19.75 I would buy back 5 naked put contracts at $20.00 and leave the other 5 put contracts to be assigned. Against the assigned shares I would immediately sell the $18 covered call to get exercised out as quickly as possible.

The Strategy After January 2013

After January 2013, I would be continuing to sell the 5 naked put contracts always out of the money to continue to generate income. If after January, Intel Stock fell back to the strike put I had sold, namely $19.00, I would immediately buy back the $19 strike and roll out and down to $18.00. In this manner I would keep rolling down with any fall in value in Intel Stock.

By July 2013, the July $19 strike puts will be set to either expire out of the money, or be rolled further out in time. By July 2013, the April 2014 naked put should be available. This is where I would roll the July 2013 $19 naked put if it could be done for a net credit. I would also be looking for any opportunity to roll the July $19 puts and reduce the number of contracts by one again.

John wanted to reduce his capital in this trade. This strategy significantly reduces his capital allotted. It also continues to generate income and will reduce his cost basis in his shares at $25.00. The strategy can be adjusted any number of ways. More or less puts can be sold, different strikes selected and capital removed from the trade can be considered for use again should Intel Stock bottom at much lower prices.

The goal is to reduce the capital at risk. To do this means reducing the naked puts being sold and lower the naked put strikes that are used for Put Selling. This is just an outline to show what is possible when an investor takes a different approach to his Put Selling strategies. It is only one of many other strategies that an investor could consider. Most strategies are only limited by the ability or imagination of the investor.