I need your advice. I currently hold some CAT stock shares and have attempted to deploy the selling covered call strategy. However, I’m comfortable holding the stock going into the end of the year, so here’s where I am.I had sold the Oct 72.50 Call a little while ago for 2.60 and since then the Covered Call has risen to 11.75 in value to buy to close.

So my question is, if I want to hang on to the stock, do I wait until Thur or Fri of options expiry week to buy back the Calls and sell, say,  the Jan 75 for around $12.00 or do I sell a deeper ITM Call to generate more income? Could you suggest what you’d feel comfortable doing in this situation. Thanks again and I enjoy reading your articles.

TRADE AT YOUR OWN RISK

Remember my disclaimer. Read my terms of use. Trade at your own risk. Everything I present is my opinion only. You should do your own homework and make a decision that suits your investing temperament and level of risk. My opinion on this stock is expressed below. But it is my opinion only and not financial advice or a recommendation.

Select this link to view the present value of CAT STOCK.

Hi CAT Stock believer. It would help if I knew what price you have originally paid for CAT Stock and how often you have sold covered calls and what call option strike prices you have sold. However here goes. Remember this is not financial advice or recommendation. It is a personal observation only.

Let’s look at CAT Stock over the past 12 months. The stock is meandering through the $85.00 range which puts it back into the late fall of last year. The recent 3 lows have all been around the $80.00 range except for Oct 4 2011 when many investors believed Greece was on the verge of default along with a number of European Banks and a recession was probably in the near future.

If indeed the news should turn decidedly negative what could investors expect as a downside in CAT STOCK? For a bit of a clue about what call option strike to possibly consider, let’s turn to April 2010 to August 2010 when the market began a collapse that was stopped by the introduction of QE2 by the Federal Reserve. CAT STOCK as we can see fell to a low of $54.89 but it often reached up to $68.00.

Let’s see how deep the decline was in 2010 on CAT STOCK as this will help us in our decision about what call option strike to consider for rolling covered calls. In the chart below we can see that the loss was 24.6%

In the market crash of 2008 up to October, the loss was 62.83%. For the question at hand I will be ignoring the panic of March as such a panic is rare. In fact there have been only 4 such panics since 1929 in the stock market. Instead I prefer to take the 62.8% decline as the figure to work from.

Now here is the latest CAT STOCK market collapse from 2011. The first decline was 19.1% and the most recent decline was 39.9%. The total decline is 42% from the May 2 high of 116.55. I wonder how many investors are aware of how severe this year’s decline in CAT STOCK has been?

Based on the above charts I would expect that CAT STOCK bottomed around $67.54 and has bounced back up to the $84.00 range is short order because despite what analysts may think, the economy of the world is not as bad as it appeared in the fall of 2008 when the economies fell off a cliff. Yet the decline in CAT STOCK has been severe.

If we take the difference between the Oct 2008 crash of 62.8% and this year’s decline of 42.1%, it would be 20.7. If we then took half of that decline which is 10%, that would place the stock around $60.80. This would mark a retrenchment in the stock of 52% which is dramatic considering there is no recession yet.

Finally let’s look at what the present technicals are indicating with CAT STOCK. The 10 and 20 day moving averages crossed the 30 day back in August and have not indicated any change. Based on the moving averages then, the trend is lower.

MACD however is supporting this latest rally which could indicate that the stock may move higher. The Ultimate Oscillator though indicates that CAT STOCK is oversold which could mean a pullback. 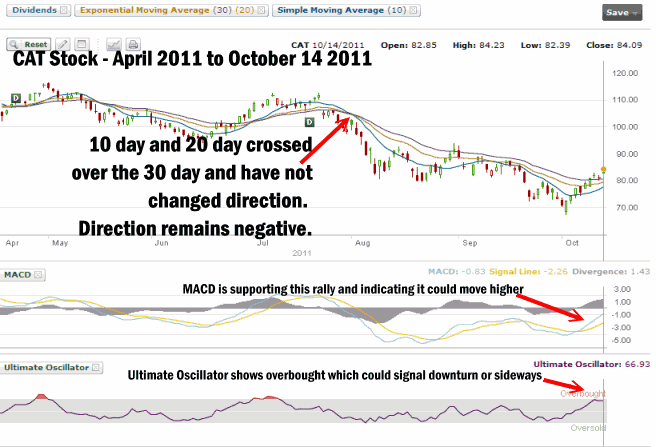 Based on the above charts, I would have to say that if CAT STOCK has not bottomed, at around the $67.00 strike, it shouldn’t fall much lower unless there is a significant economic development or unforeseen event.

As to what call option strike to roll your CAT STOCK covered calls, below is the table for January 2012. It is rather difficult to pick a call option strike as I do not know what your original purchase price was and how much income you have already earned. However based on the charts above I would be included to roll to the call option strike of Jan 2012 $70.00.  At a bid of $16.25, this puts your selling price at $70.00 + $16.25 = $86.25 which is far enough above the present price to keep the dividend safe and probably allow you another roll as January arrives. It provides an extra $2.00 of earnings plus the dividend. This provides you with protection to around $67.50 which was the recent low.

If on the other hand you have made a lot of income to this point, I would consider rolling forward to January and staying at the $72.50 strike. This provides an extra $2.55 plus the dividend and provides protection to around $69.50. 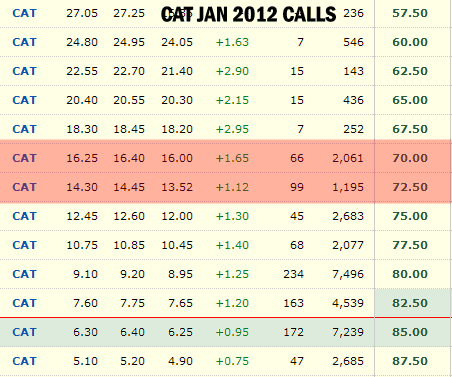 If CAT STOCK should fall back and reach the $70.00 strike, I would immediately buy back the Jan 2012 $70.00 call option strike and roll further out and select the $67.50 call option strike. I would not wait for the stock to move any lower before closing as I would want to capture as much premium on the $67.50 covered call as possible and this would of course be better to do while the stock is still around the $70.00 strike.

Personally I believe that we could see a rally going into the December season. If Europe gets their act together it could kick the problems down the road for a while longer. However I do believe the chance of CAT STOCK reaching back into the mid to upper 90’s remote unless the economy turns around world-wide. Remember that Caterpillar is a huge international company with operations throughout the globe. Should the stock collapse back to levels seen in October 2008 or March 2009, it would be a steal to own Cat Stock at those levels.