Normally in a bull put spread, the investor wants to benefit from the range bound or rising stock but with more protection than a simple put selling strategy. As a financial investment strategy it is far more conservative than put selling and while less profitable it can still be a profitable option strategy for income.

If the stock rises both puts expire worthless and the investor retains the net credit.

If the stock falls the breakeven is the higher strike less the net credit received. Unlike put selling, with a bull put spread any loss is defined at the outset of placing the trade.

The Bull Put Spread is more conservative than many option strategies for income including put selling and it is popular among option investors. When an investor gets involved in put selling, they have left the risk open to the downside on the stock. With a bull put spread, the investor has limited his downside at the outset of placing the trade. In return however he often will earn less than the put selling strategy, but not always.

For our example I have chosen a fairly volatile stock, Cat Stock or Caterpillar stock. As of Nov 7 2011 Cat stock closed at $95.00. Select this bull put spread link to view the last 6 months of Cat Stock. Cat stock has been pretty exciting this year and for many investors it was an ideal candidate for the bull put spread strategy. 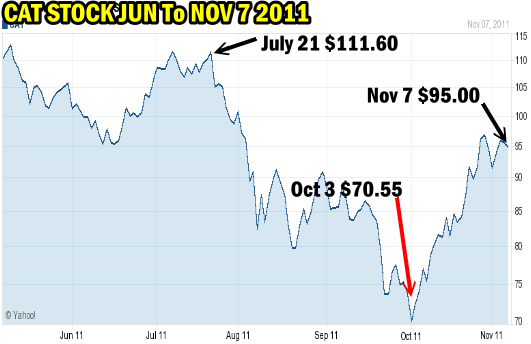 Below is the January 2012 Put Option chart for Cat Stock as of November 7 2011. An investor interested in putting together a bull put spread might choose these put strikes. 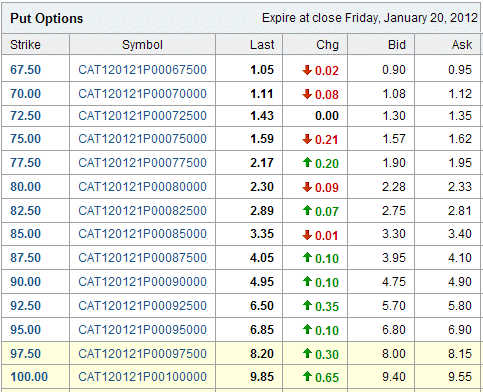 These include a limited downside protection and income earned when a stock is range bound or moving higher.

These include having a smaller return than a simple put selling strategy since the investor has spent some of the income earned to purchase a put for protection. As in the case of put selling, the upside is limited should the stock rise as the bull put spread establishes the income earned at the time of implementing the strategy. Again as in the case of put selling, the amount of capital that can be lost with a bull put spread is naturally greater than the amount of capital earned.

The bull put spread is a popular conservative option strategy where unlike put selling, the largest amount of loss is established at the outset on the trade. The bought put limits the downside risk and the sold put produces the income from the trade.

While in theory the maximum amount earned is set right at the outset when the trade commences, just as in most option strategies, there are many variations to the bull put spread and many ways to roll and adjust the bull put spread during its lifetime to earn more income and at times provide even more protection.