I always enjoy the start of a New Year. It’s like I am given a fresh start to apply everything I learned from my mistakes in the previous year, to a brand new year. 2012 promises to be an exciting year. I believe the most important aspect of 2012 will be the bond roll-overs for this year. In total, $7.6 trillion dollars of debt has to be rolled with Japan leading all nations by rolling over $3 trillion dollars. Next in line is the US with $2.8 trillion of debt.

Japan has a distinct advantage as the debt roll-over is primarily restricted to Japanese individuals, companies and financial institutions. Basically they will be sort of swapping “this” for”that”. The US debt is a bit more complicated as about half of all US debt is held outside the United States. However with Europe in a mess the United States may find that their debt roll-over goes better than many, particularly those at PIMCO, expect.

I believe aside from the Bond Roll-overs the European debt crisis will continue to dominate the concern of investors and keep volatility high. Investing has always had tough periods, but investing in risky assets always requires investors to stay nimble and aware.

2) Don’t believe the analysts who are jabbering on about stocks being cheap. Some stocks are cheap, it is true, but many big blue chips are not cheap and in fact most are fully priced and many have moved into over-valued territory.

3) When selling covered calls, consider the in the money call approach to provide some level of protection in the event of a market decline.

4) Consider using market technicals daily, to follow the trend in the market as this could easily be another year of “Sell in May…. you know the drill”.

5) Forget predictions for the entire year. No one can or does know what will happen, period. I plan to stay with the cautious bull approach again this year. It has worked in some of the worst markets over the past 35 years.

6) Stay with large cap blue chip dividend paying stocks. If the stocks tank at least you are being paid while waiting for them to recover. I believe this year will see a continuation of capital flowing into large caps since they offer the most protection and as such may get pushed higher this year, at least for a while.

7) When selling puts only pick stocks you want to own in the event of a market pullback.

8) When selling puts consider staying further out of the money than usual and close early when the profit is there. Think about the prospects of possibly double dipping on the same stock, even in the same month if the stock whipsaws up and down. Sell on the dips and close on the rallies, not vice versa.

9) In a severe bear market, think protection first and profit second. Remember that in bear and bull markets stocks can run up quickly. Many investors feel they have “missed the boat” when this happens. But you’ve must nothing. Bear markets are like the Titanic. They fool you with their great speed and “unsinkable” rally and just when you take off your life jacket, they hit the iceberg and throw investors into cold water reality. Just to repeat – “SELL DIPS, CLOSE ON RALLIES”.

10) Last, remember that when you close a trade whether stock or option and there is a profit, you are removing your capital from risk and have successfully added to your income. Forget chasing for a 2, 3 or 4 percent put selling opportunity with higher risk, and instead look for large caps that are trending higher, sell out of the money puts on the dips and be content with even half a percent return in a month. Think preservation of capital always.

This year you will probably hear about some scary possibilities such as the Euro tanking below $1.00 or a European country pulling out (think Greece) and of riots and unrest among people out of work. But also consider that in 2011 there were dire predictions on many websites of the US dollar collapsing, and gold running to $2500 and even $3000. 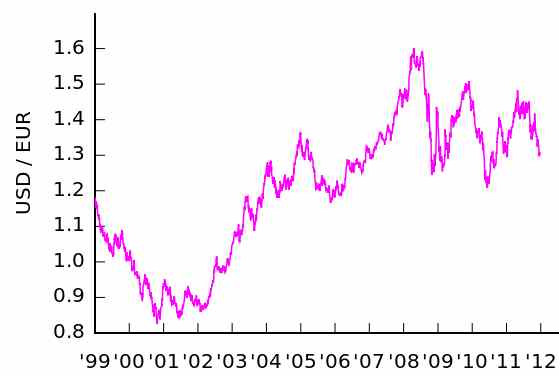 It's important to keep things in perspective when investing. While the media is screaming about a decline in the Euro and its possible demise this chart shows the Euro's value has been a lot lower in the past. Before it can disappear it will have to move a lot lower than where it is today.

Recall that many analysts predict that the US is going the way of the dodo bird and is like the Roman Empire in decline.

But Rome took over 400 years to decline and even today historians still speculate on why the Roman Empire collapsed. Read this article on the collapse of Rome. I don’t believe the US is about to let themselves become extinct. These are tough times and growth I believe will be limited. A recession could be possible and maybe even probable but unlike Rome, the United States has more innovators than any nation in history. Every year there are new products, possibilities and ideas brought to fruition. The Gross Domestic Product in the United States expanded 1.8 percent in the third quarter of 2011. It is important to keep things in perspective. From 1947 until 2011 the YS average quarterly GDP has been 3.28 percent. But this figure is badly manipulated by some highs up to 17.20 percent in 1950 to lows of -10.40 percent in 1958. Depending on the source the US GDP is estimated to be somewhere between $14.5 to  $15 trillion dollars. China is estimated to be $5.8 to $6.8 and Japan close behind. The United States is the largest economy in the world and the continuing parallel between it and Ancient Rome or Ancient Egypt or the Aztecs are pointless.

I am not expecting a lot out of 2012. Those who are calling for a market collapse in 2012 are primarily those who have called for the “second shoe” to drop since March 2009. A lot of investors have been out of this market since the fall of 2008 and are scared to death to get back in. I believe that’s the wrong approach.

Instead stay focused, put in place a solid plan, keep 30% cash available for opportunities and remember that if the market does improve going into the Spring, watch bonds for bond buying opportunities when bonds begin to fall out of favor. I plan to be buying bonds again this year if yields rise and no one wants them, because when everyone believes that things are improving, it may mean we are getting near another peak in equities.

All the Best To My Readers For A Healthy And Profitable 2012.