GM Stock is not for buy and hold investors. It is also not a stock for put sellers either. Personally I don’t think it is a stock for anyone other than the US Government that still owns a pile of it. Every once in a while I get emails from readers wondering about GM stock. It is down 50% from its high set in January of 2011 shortly after its IPO in November of 2010. I keep writing back the same article again and again. Forget GM stock is my advice. I plan to stay far away from GM Stock.

I read an interesting analyst report on GM Stock today in which the analyst indicated that he expected GM stock to hit a high of $40.00 in the next few months but certainly before the end of next year. He didn’t really have anything to back it up, other than that others were also buying it. He is dreaming in my opinion. To check out an overview of some analysts select this GM Stock link. I think anyone who believes GM Stock is going to make a terrific comeback in the next 12 months is literally in another dimension all together. The world’s economies are slowing and Europe is in a real mess. This is just not the type of economic environment for car companies and GM Stock will reflect this.

Another article I read recently talked about Greenlight Capital’s David Einhorn and his prediction that GM Stock will move up 50% from the recent lows of about $22.00. He owns stock at the average cost of $25.78. Nothing any analyst, stock picker, fund manager or sooth sayer can say will make me change my mind. GM Stock is not worth taking time to even look at.

The GM stock chart reflects losses of more than 50% of its value so far this year. 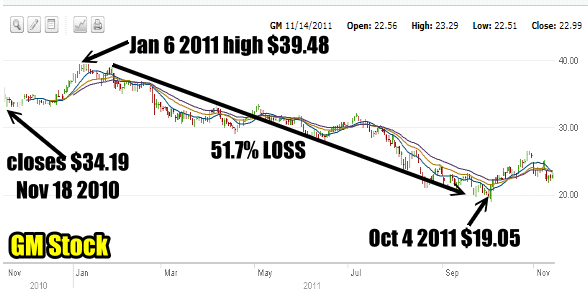 GM Stock has lost half its value in less than a year.

GM Stock Fundamentals As Of Nov 2011

Below are GM Stock fundamentals as of Nov 14 2011. The stock is currently trading below book value. It has earned $4.44 a share and it is trading at just 5.1 time price to earnings which is lower than Ford Stock which trades above 6.5 times. These are low by industry standards. Toyota trades at 38.6 times and Honda trades at 18.9 times price to earnings. 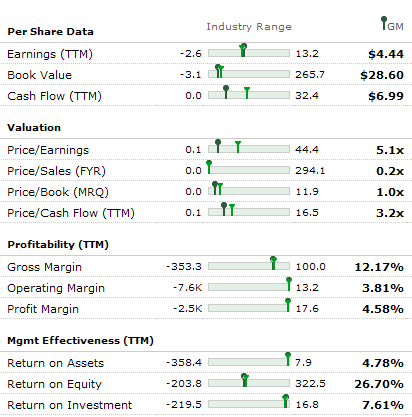 GM Stock Fundamentals as of Nov 2011

GM Stock and Put Selling Do Not Mix

For some time now I have watched GM Stock put options for 6 months and 1 year out. Investors keep selling puts against GM Stock. Most are selling January 2013 puts. For a while a lot were selling the $25.00 put strike. Most have now moved to selling the $17.50 puts. Every day I see about a dozen contracts sold. At $2.29 for the January 2013 GM Stock $17.50 put, the return is 13%.I have received a lot of emails from readers who have sold these puts and asking my opinion.

I believe this could end up being a serious mistake. Many of these readers didn’t realize that if the stock falls to say $10.00, they are stuck owning the shares at $17.50. One gentleman who wrote me yesterday sold 30 puts at January 2013 $27.50 and was wondering if I knew a rescue strategy he could apply to his position. This is folly at its worst. I believe GM Stock will continue to languish and grind lower. 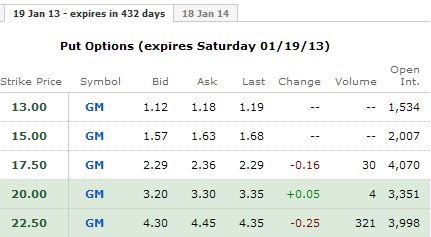 To put in place a rescue strategy on GM Stock puts requires time and confidence in the company. RIM stock is a perfect example. I still receive emails from readers who sold puts at $80.00, $70.00 and $60.00 on RIM. The losses are staggering on some of these companies.

It is important for investors to realize that there is a difference between GM Stock and JNJ Stock or MCD Stock. At different times in history, certain companies have their day in the sunshine. Netflix Stock is a great example. It was a wonderful trade months ago, but those days are gone. GM Stock’s days are also gone. No rescue strategy can work over a period of a few months to save positions in stocks such as GM Stock, RIM Stock or NETFLIX Stock to mention just a few.

Netflix Stock Loss Is A Staggering 71.8% in Just 4 Months

Investors forget that investing is risky beyond belief. Stocks are risky assets with a capital R. Remember that quality of the company is important. The stocks I have mentioned are portfolio killers. They should be shunned by all investors and shame on analysts who gave such stocks buy recommendations at over-valued levels.

Just my opinion, but all the stocks mentioned in this article are not worth put selling strategies and GM Stock is not a stock I would ever get involved in put selling against.