Thursday saw all three indexes stage a strong morning rally which drew in decent volume. The first push took the S&P to 4580. A slight dip held which drew in more buy volume. This pushed the index to the morning high of 4602 right at the 100 day moving average. Initially the S&P looked like it would hold but two dips setup the cautionary pattern of lower highs. But it was shortly after 1:00 PM that the S&P fell back to the initial morning rally high of 4580. You can see in the chart that buyers held and the index managed to hold onto the 4570 level for almost an hour. When another rally failed shortly after 2:00 PM, selling increased dramatically. 2:00 PM has become common for reversals over the past three months and Thursday was no different.

Once the final rally attempt failed the S&P slipped below 4570 and buyers became sellers. By 3:00 PM selling became nasty as morning buyers became sellers again and rushed to get out of stocks. The final half hour was particularly violent with stocks collapsing and the S&P closing at the day’s low.

The selling was intense in the final hour as many investors had been caught twice already this week in rallies that failed. Obviously on Thursday the rally looked stronger which drew in higher volume in the morning, so when the market broke at 2:00 PM below the early morning open, it became a mad dash to the exits. Many stocks fell far more than expected as investors rushed to get out at any price. This present correction is far worse than any of the corrections in 2021. Volumes have reached levels seen in the start of the March exodus of 2020 when the pandemic caused markets to eventually collapse. Obviously analysts who felt the Fed’s tightening was “baked into markets” were wrong. Investors are concerned that earnings growth will slow in 2022 and worries about everything from rising inflation and interest rates to even the possibility of a recession have the market in a sour mood. Into this environment have returned the bears with dire warnings over the past two days of everything from a 40% to 50% market collapse. That just adds to market nervousness. Often when we hear those kinds of warnings the market nears a bottom of some sort. As well, the Fed will be more than aware of the chaos that is being caused. We should hear some soothing words soon, perhaps as early as next week.

Meanwhile for Friday the index is very oversold but Netflix earnings after hours on Thursday saw the stock collapse over $100 for a 20% drubbing. That is bound to weigh on investors on Friday. Usually at times like these many investors decide they just want out. That could mean heavy volume at the open and a lower start to Friday. Friday is also triple witching which won’t normally help markets stay afloat.

Let’s look at the technical carnage from Thursday’s plunge to see what Friday may bring.

The closing candlestick on Thursday is bearish with the S&P closing half way to the 200 day moving average after failing to retake the 100 day.  Often this candlestick predicts a morning drop and then a bounce back intraday.

The 21 day and 50 day moving averages are falling which is also bearish.

The 100 day is falling which is bearish. Only the 200 day moving average is rising which is still bullish.

For Friday the chart is very bearish.

Momentum: Momentum is rising and is negative. It is still signaling oversold and ready to bounce.

MACD Histogram: MACD (Moving Averages Convergence / Divergence) issued a down signal on Thursday Jan 6. On Thursday the down signal gained more strength and closed at a very negative 25.92. The MACD histogram is at a point where we often can expect a bounce.

Relative Strength Index: The RSI signal is falling and very oversold. It can fall further before a bounce but not much further.

Rate of Change: The rate of change signal is unchanged despite Thursday’s plunge. This is a good signal for the bulls.

For Friday the chance of the market opening higher is slim. Netflix beat on earnings but showed subscriber growth is not meeting expectations. The stock collapsed $100 after hours. Many analysts point to Netflix’s numbers as a signal that consumers are watching less streaming as the global community comes out of the pandemic.  Also on Thursday news that Peloton (PTON) is stopping production of their treadmills and exercise bikes due to lack of demand was seen by many investors as another signal that stocks are going to fall further as the economy changes as it moves out of the pandemic. Peloton Stock (PTON) closed down 24% to $24.22. The stock is now 84.9% below its 52 week high of $160.41 set on Jan 22 2021.

The technical indicators for the S&P are showing the index as very oversold and some are signaling extremely oversold. Friday though is also triple witching which often means higher volumes and increased volatility. For Friday the day will open lower and stocks will continue their drop but a rally is possible intraday. The interim bottom to the current sell-off could still be the original prediction made when the selling began, namely the 200 day moving average. This is at 4000 and would mark the deepest correction since the pandemic market collapse. It is also 83 points lower which is probably unlikely to occur on Friday alone. The outlook then is for more selling, a bounce attempt and another negative close. Monday could see the 200 day reached. 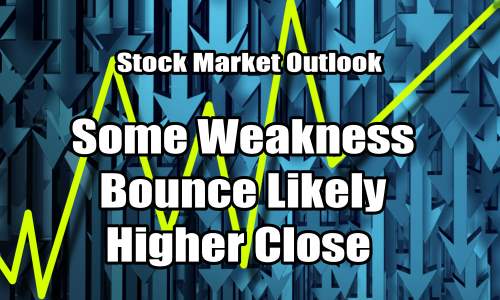