Market Timing / Market Direction – Is There Something We Don’t Know

Market timing could not have predicted the move this morning by central banks to provide liquidity to the European Banks. Obviously the European debt issue is more dangerous than market timing tools, investors or average citizens realize. The coordinated move by the Federal Reserve, European Central Bank, Bank of Japan, Bank of Canada, Bank of Switzerland and the Chinese Government is a sign of just how serious the European mess is. Did you find it interesting how on the same day as this occurred we also were given positive news about home sales perhaps bottoming, Chicago Manufacturing Index and unemployment? Strange on the home sales after the Case-Shiller yesterday commented about a possible double dip. Obviously the Federal Reserve wanted to be sure a positive message was sent. This reminds me of the article I wrote Market Manipulation, You Bet.

I was watching the business news this morning with the Dow up 400 points and the analysts were all discussing how the European situation was nowhere near a Lehman Brothers bankruptcy. They went on and on about how this could easily be an over-reaction by the Fed. My opinion is different. I believe this effort of what amounts to global quantitative easing is because of lessons learned by the 2008 Lehman collapse, Bear Stearns sell out (remember the $10.00 per share buy out?) and trillions of dollars lost in 2008 and 2009 through collapsing pension fund valuations. In that instance central banks reacted AFTER the fact. The damage was already underway when central banks realized they had no recourse but to pump liquidity into the system.

By moving now to provide this much liquidity it may buy the EU enough time to right their ship. Instead if world central banks waited for the collapse of perhaps the Euro or a bankruptcy of a European Bank or even a country as small as Greece, it might damage the global economy enough that the recovery in the US could have stalled or worse, reversed course. In 2008 we watched as governments everywhere literally spent billions of dollars that they did not have. This led to more debt but did stall the recession from being deeper and probably saved the world’s banking institutions. None of this could be predicted by market timing tools.

Market timing tools like the Ultimate Oscillator, McClellan Oscillator, MACD, RSI and a host of others try to understand what is happening in the market to predict future market direction. Yesterday despite two days of rally, market timing indicators were still not convinced that this was anything more than a technical bounce.

Today’s big market direction move would be a combination of short sellers covering and funds moving money back into risky assets. The chart below shows today’s action. In the afternoon when the market slid back a bit, the pace of buying picked up into the close and market timing indicators such as momentum and volume showed the investors rushing into the close. This is almost always short covering as traders rush to either lock in profits or mitigate losses. This is also why I gave up on short selling years ago because you just never know what the Federal Reserve might do next.

Short sellers were probably waiting to see if there was going to be any weakness to buy back losing positions. When the market dipped a bit it was the only time during the day for weakness and they probably bought to cover. This is a good market timing sign that the market direction will probably move higher tomorrow. 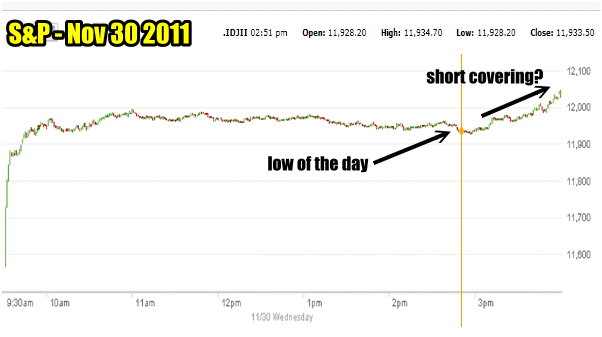 Market timing indicated that the close was a probably more short coverings than long buying. 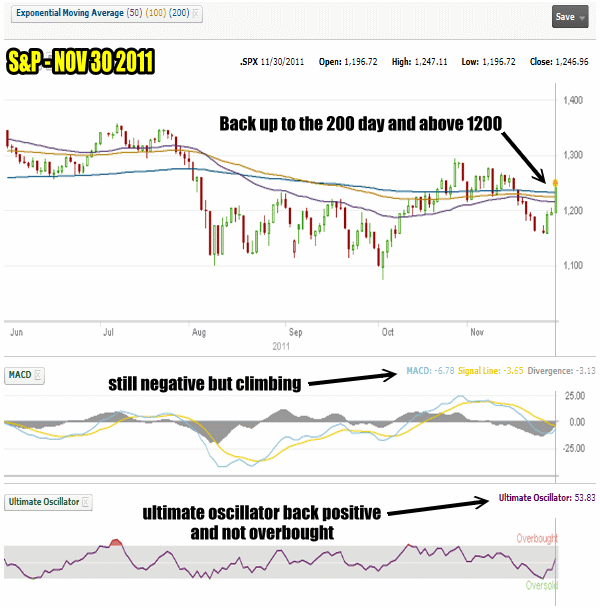 Market Timing / Market Direction for the past 6 months. The S&P is back above 1200.

Market timing indicators are now saying market direction is up but after such a big rally today, that is not surprising. I think tomorrow will see some follow through as it is also the first day of December.

What This Global Quantitative Easing May Be Telling Investors

As individuals our world of influence is so small, we cannot possibly see how serious the economic issues are that faces the world. For the Central Banks to act in such a decisive move I wonder if there was a larger event about to unfold. An economic event that could cause severe damage.

The strength of the economy of the United States is paramount to the overall world. Despite what analysts may believe or comment on, 25% or one-quarter of the world’s economies depend on the United States. China may be the second largest economy in the world now, but it is still less than a quarter the size of the United States. The European Union crisis could easily derail any US recovery which is obviously still fragile but slowly improving. This of course is just my opinion, but there you have it. You can place your opinion in the comments below.

Where Does All This Leave Investors

Market timing is based on technical observations of past events to try to predict future events. Last night’s market timing technical outlook I had labelled “Up Down Situation” .  Today’s move does not put investors out of the woods yet. It is probably a definite step in the right direction although without knowing why global quantitative easing was done, it is hard to judge how dangerous this market may actually be.

This move by central banks plays well into the strategies of put selling and in the money covered call writing. But I do not believe that everything is just rosy from here. The strategy I have used this year is the cautious bull and staying cautious I believe is important in this climate no matter what market timing technicals indicate in the coming days and weeks.

First and foremost any put selling is obviously going to be in great shape after such a reversal as today. While the market direction back up may not last, the chance of it collapsing overnight or even in the next few days is, I believe, limited unless the European Central Bank and Germany fail to follow through. If they fail to do so,the market direction could reverse again. But market timing indicators will not be able to warn of such an event since it is political and would occur in too short a duration, such as overnight, to allow market timing to pick up on the internals of the market.

Ever been to the European Central Bank? This market timing link will take you there.

Market Timing / Market Direction And What I’ll Be Doing Next

After such a big rally my market timing indicators are saying that the market direction is up. Keeping in mind than that inaction now on the part of the ECB and Germany could tip the market direction back down, I will continue to stay with selling far out of the money puts and in the money covered calls. You cannot understate the importance of having a plan when it comes to investing. Market timing is great to have in the investing toolbox but events like today cannot be predicted by market timing and that is why it is important to stay with a plan that consistently provides some profit and some protection.