Market Direction Outlook for June 12 2013 – Sideways with Bias Down

Tuesday’s market direction was intriguing as the markets opened down and then through the morning investors pushed the S&P almost into positive territory and then gave it all back in the afternoon. Interesting how quickly sentiment can change. Just two weeks ago the market direction was pushing higher and most analysts and investors felt that the economy was moving ahead. Now the opposite effect is suddenly being felt as worries over China, then Japan, Europe and finally the United States and the Federal reserve scaling back Quantitative Easing have investors back on edge.

Today’s S&P 500 chart shows the market direction action. The morning opened with a large gap down of almost 1% and then a push back until the market almost recovered by about 11:30 and then sold off and finally collapsed at the end. The S&P however did not close quite as low as the morning gap open but pretty close. 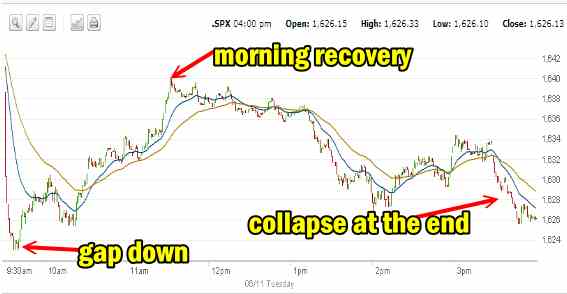 Market Direction Technical Indicators At The Close of June 11 2013

For Momentum I am using the 10 period. Momentum is still negative today and has remained negative since May 29.

For MACD Histogram I am using the Fast Points set at 13, Slow Points at 26 and Smoothing at 9. MACD (Moving Averages Convergence / Divergence) issued a sell signal on May 24. The sell signal is still valid and again today the signal increasing to the downside.

The Ultimate Oscillator is still positive but just barely.

Rate Of Change is set for a 21 period. The rate of change is back negative which is to be expected after today’s market tumble.

It is amazing how quickly the market has changed back to down from up. This is part of the reason why I believe strongly in using options with stock when investing. Just two weeks ago I was Put Selling against rising stocks. Now I am Put Selling against declining stocks. The key though is I am still investing, thanks to using strategies that can profit and protect in both market environments.

There is not a lot to say again today. The market direction technical indicators are overwhelming negative but the numbers still do not point to a big correction, instead simply weakness. For Wednesday then I would expect to see a bit of a bounce and then more selling as the market direction I think will end up lower at the close on Wednesday.